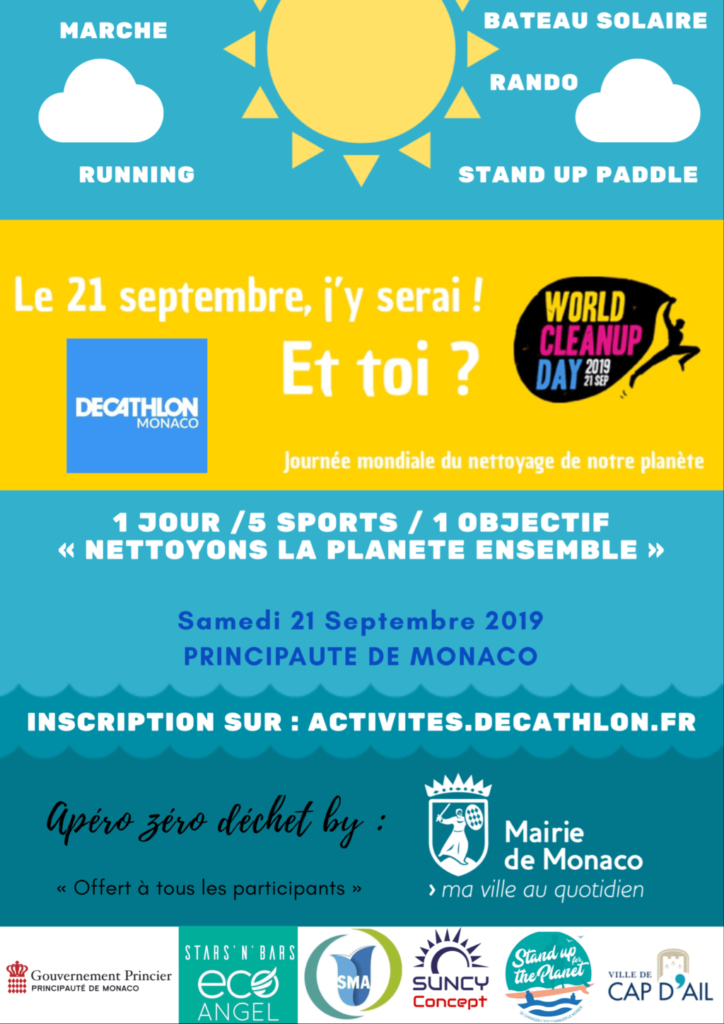 The Monaco City Council wished to join the organization of the 1st edition of the World CleanUp Day in the Principality, which will be held Saturday, September 21, 2019.

Promoted by Decathlon Monaco, this day in which the Government is participating through the Mission for the Energy Transition has attracted a lot of enthusiasm from many environmental actors in the Principality who are actively collaborating in the preparation of this day: Stand up for the Planet, the Monegasque Sanitation Society and Eco Angel.

This World Cleanup Day aims to mobilize, raise awareness, preserve and federate around the problem of waste that soil our soil and clutter our oceans, many issues dear to Marjorie Crovetto Harroch, Deputy Mayor, in charge of Framework of Life, Environment and Sustainable Development.

The first edition of the World CleanUp Day in Monaco echoes this global event launched 10 years ago and which in 2018 brought together 18 million participants in 158 countries and 200,000 in France alone.

In the Principality, this edition will take place on a morning and will combine sport and protection of the planet by articulating around several environmental actions, on land and at sea, in Monaco and in the neighbouring communes of Cap d’Ail and La Turbie. Five sports activities are indeed on the program this Saturday, September 21, 2019: walking, running, hiking, stand-up paddle and solar boat. The goal: to collect a maximum of waste.

At the end of this morning, all the participants will meet at 11.45 in the Larvotto, on the esplanade of the Rose des Vents, to weigh the garbage collected and to share a “Zero waste” aperitif offered by the Monaco City Council which commits itself for several years in the fight against food waste. On the menu, fruit juices made with unsold fruit from La Condamine Market and culinary preparations made by chef Julien Baldacchino from products close to the date of consumption from the Restaurant Municipal.