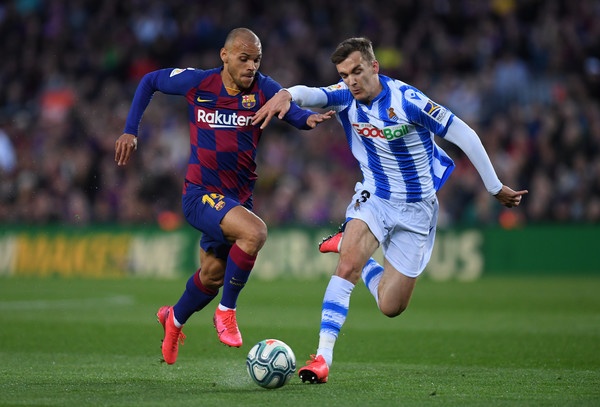 Having conceded 44 goals in their 28 Ligue 1 matches before the season was cancelled, AS Monaco have acknowledged the need for some defensive improvements for next term.

Knowing that holding the fourth worst defensive record isn’t good enough if they plan to return to the Champions League, the club are unsurprisingly keen on strengthening in this department.

News continually linking them to a move for Real Sociedad defender, Diego Llorente, is certainly a positive, for he’s a quality central defender who would add some much needed solidity.

With reports suggesting Monaco was close to signing him in the January window, Monaco appear reasonably well placed to have another crack at the Spaniard in the summer. The fact Robert Moreno is well aware of his talents and is very interested in securing his countryman should certainly enhance their chances.

When quizzed on a potential move away from the Basque side, Llorente made sure not to give away too much. “Right now I’m not thinking about it, but you never know what the future might bring. When all this is over, I’ll see what sporting and personal situation I’m in, what my body is asking of me and what sporting challenges I want to face,” he explained.

Due to La Real currently occupying a desired Champions League spot, surely any potential move will hinge on whether his team qualify for the competition once the season resumes.

A stopper who undertakes his work with composure, clarity and assuredness, the 26-year-old’s proven himself to be one of the better centre halves in La Liga even if he’s not a big name like Gerard Pique, Raphael Varane, Samuel Umtiti or Sergio Ramos.

Exercising sound judgement and making great decisions, the way Llorente remains concentrated and wide awake to his surroundings due to his scanning and strong reading of the play has seen him shine. This subsequently means he reacts swiftly when an opponent drops deep, embarks on a run in behind or into the box. In addition, the way he takes on the marking assignments of midfielders surging into the box and checks his shoulder to survey for blindside runs or markers trying to gain separation from him have been key too.

Constantly altering his body positioning depending on the situation, his neat adjustments hold him good stead to handle whatever comes his way. When it comes to defending crosses and cutbacks, he transfers his quality into dealing with such deliveries, where he picks up the ball’s flight to clear the danger or adjusts his posture to win his headers. 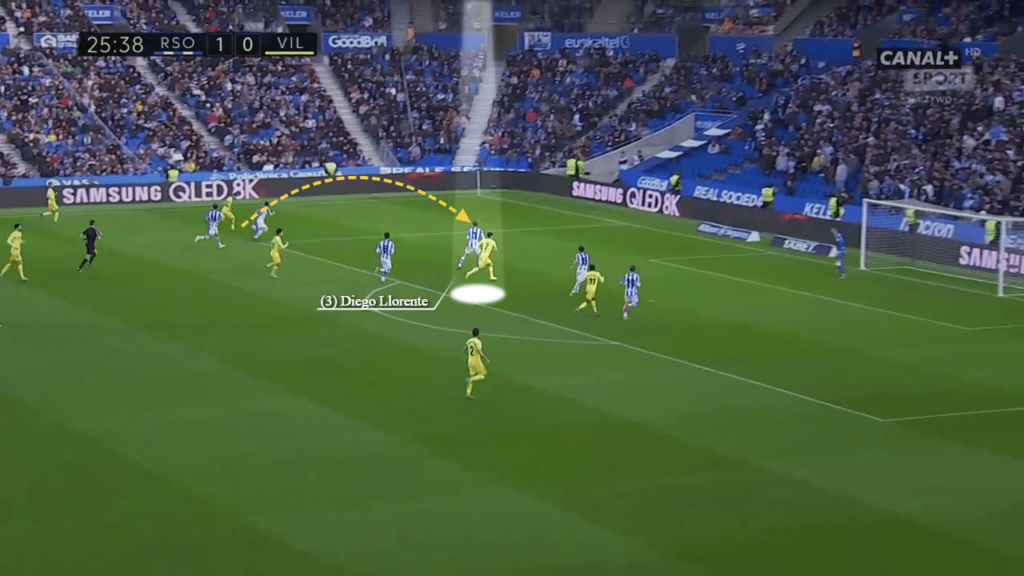 Keeping his spacing between his fellow defenders and remaining organised for the most part, it’s been impressive to see he and his colleagues all be on the same page. Moreover, when needed to step out, drop back, cover behind a defender who steps out or when required to support a teammate by taking on a blown marking assignment, Llorente typically chooses the right course of action to take. 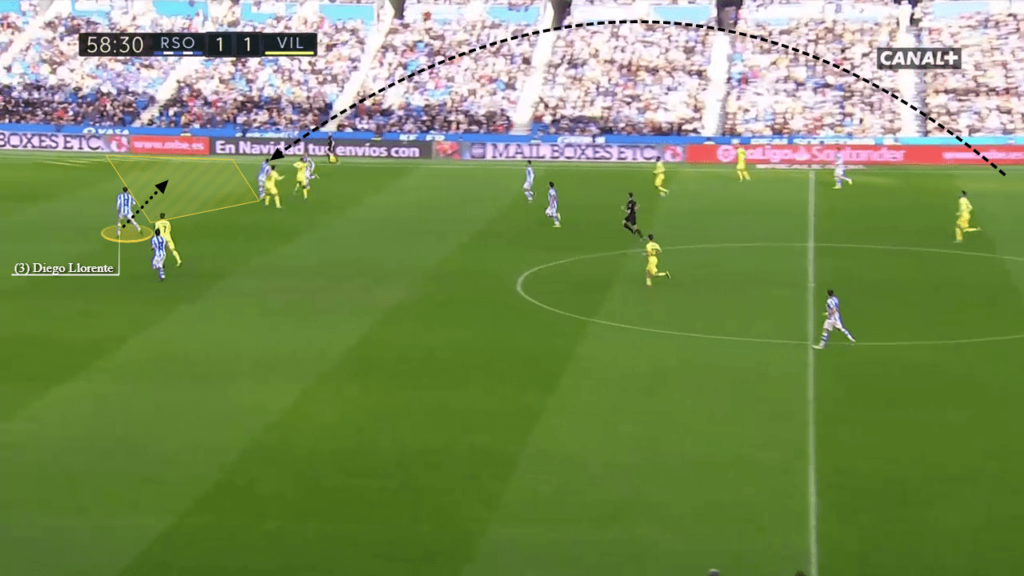 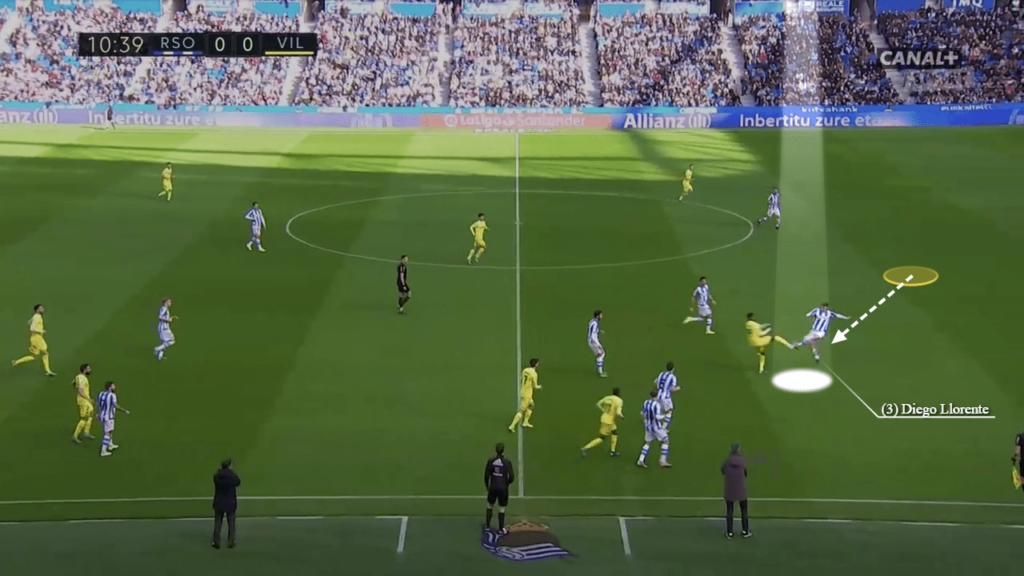 Stepping out with conviction to make a tackle

Very awake to pressing triggers like his man receiving in an open body shape or with their back to goal, plus if they’re about to receive an underhit pass or a pass out wide, Llorente looks to get touchtight so his foes struggle to execute cleanly. 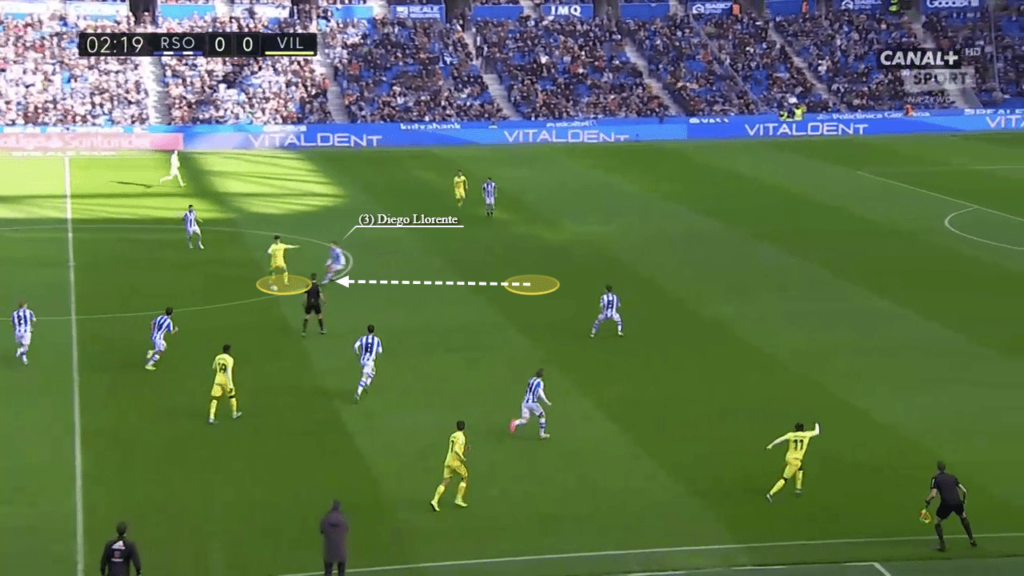 Stepping out as his man receives in an open body posture

Although he can sometimes get drawn out of position on occasion, be done for pace or be late on tracking his man when they come short, more often than not, he’s spot on with his timing.

Meanwhile, when defending 1v1, opponents haven’t found him too easy to bypass, for he uses his long legs, strong frame, good response times and positional awareness to slow down his man’s progress or chime in with an intervention. His toughness to beat is also present when challenging for aerial duels, where his imposing 186 cm frame, strength and timing means he wins 2.67 headers per game (with a roughly 60% success rate).

Switching the focus to his offensive output, and the former Real Madrid prospect’s extremely comfortable with the ball at his feet. An integral component of Imanol Alguacil’s philosophy to build out from the back, he’s been a standout instigating passing moves with his calmness, pass selection and accuracy. Using his admirable range and vision to find his targets centrally, wide or in the half spaces, there’s been a lot to like about his prowess here.

Not afraid to strike the higher risk passes that so often beat the press, how he’s hit some super chipped balls to colleagues, broken the lines with penetrative ground balls and has moved the ball quickly has ensured he’s been a valuable asset. 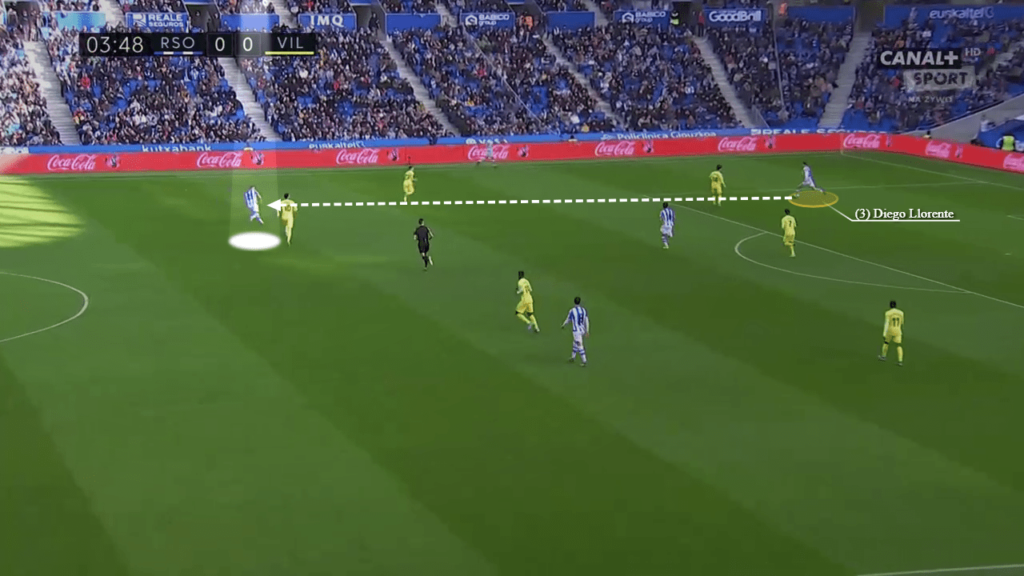 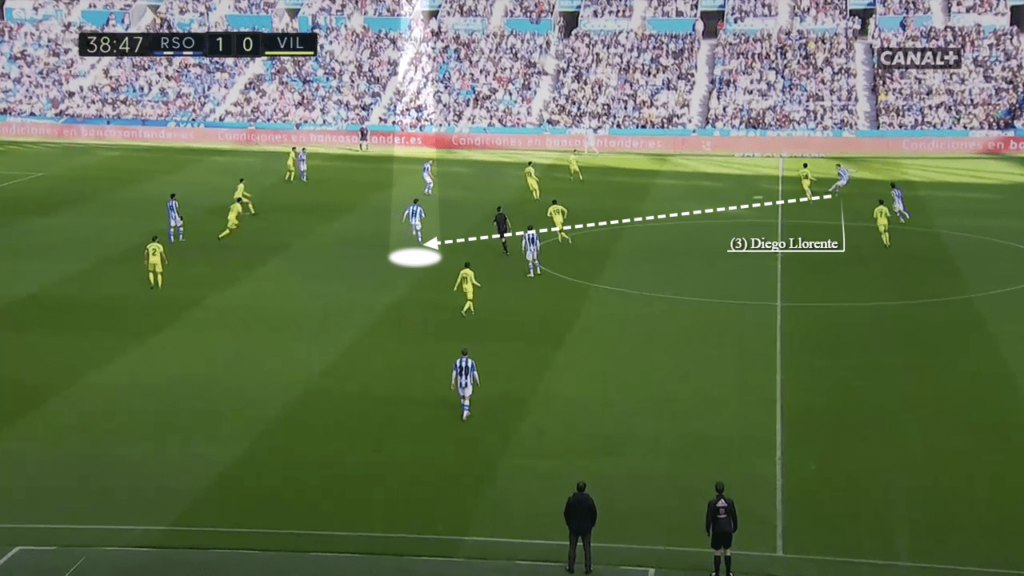 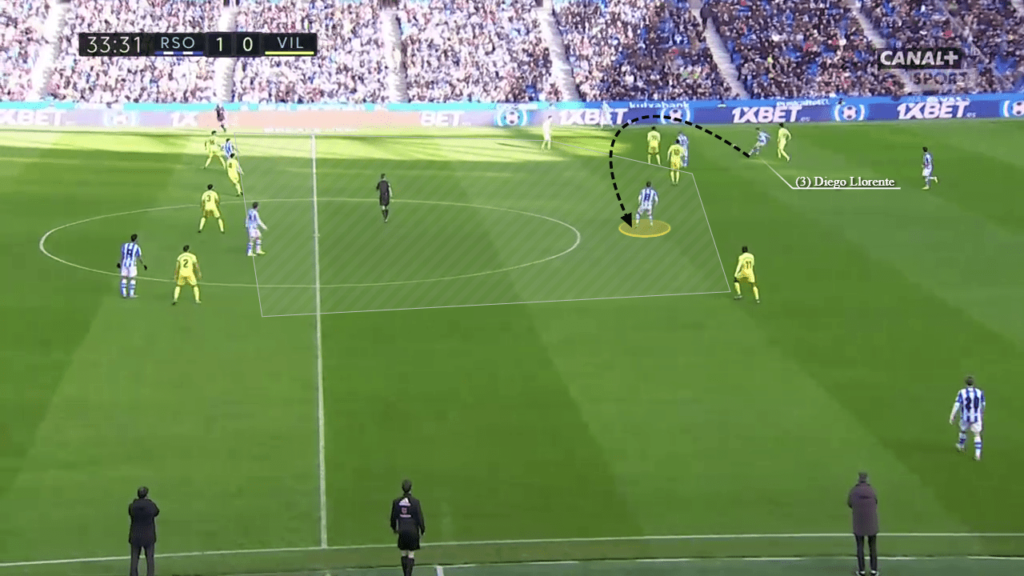 Clean, crisp and able to use both feet, Llorente’s vitally shown the presence of mind when the progressive option isn’t on, so he’ll instead coolly recirculate possession while his team waits for an option.

It’s also key how immediately after he passes the ball he’ll move quickly to offer himself as a supporting outlet to use if his teammates needs it.

What’s more, if the opportunity arises to dribble upfield into vacant spaces, he’ll take it, knowing he can gain territory and ultimately provoke a pressing action to draw one or more opponents out of position. This will then frequently leave a passing lane open or enable him to find the consequent free man to add momentum to passing moves. 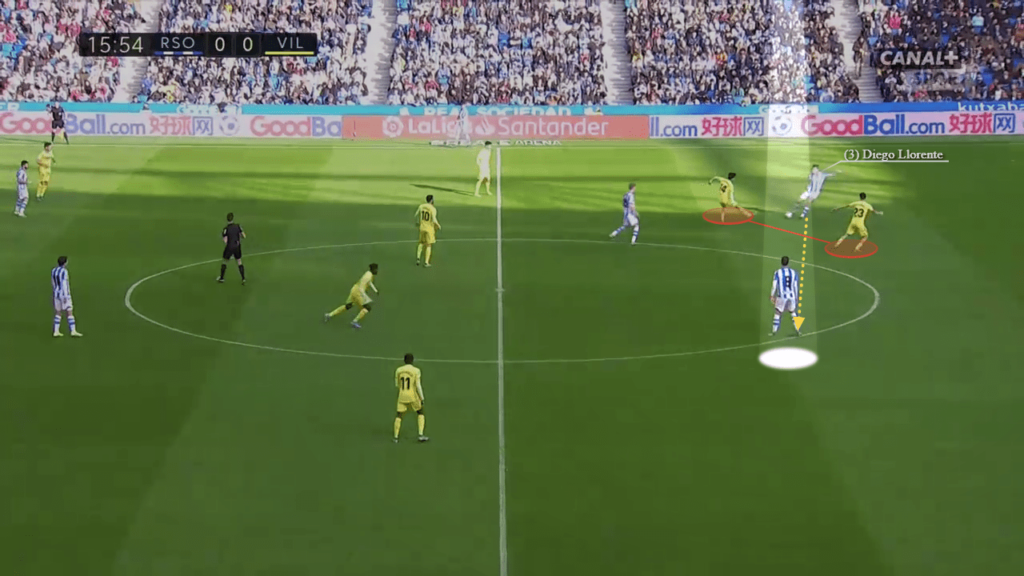 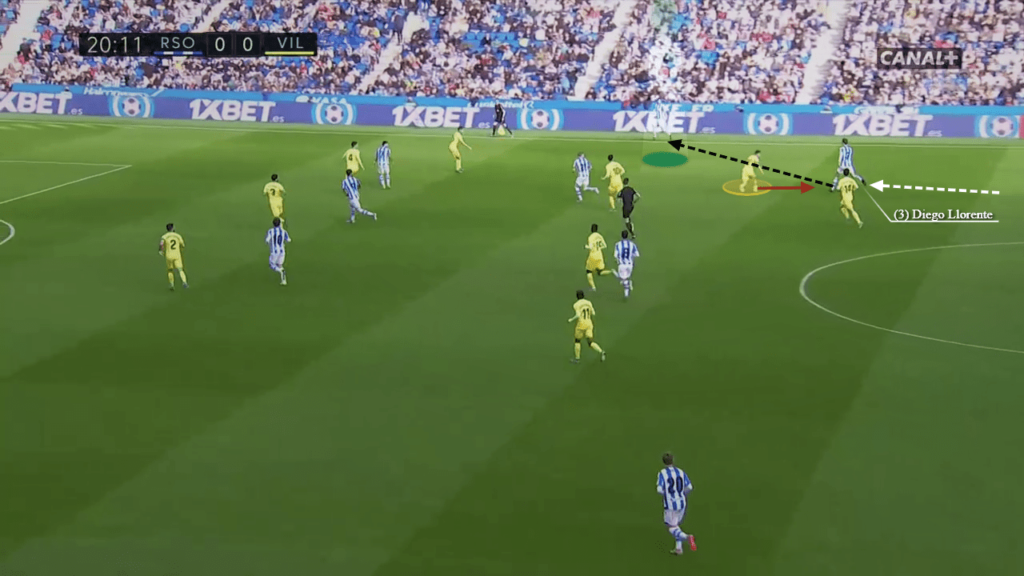 Dribbling upfield to then draw a man before finding his fullback

Ticking just about all the boxes wanted in a defender on both sides of the ball, it’s little wonder Monaco are joined by the likes of Liverpool, Tottenham Hotspur, Wolverhampton Wanderers and West Ham in being credited with an interest. One sticking point could be the €50 million release clause, which could prove a major hurdle in the current climate.

Set to face stiff competition for the talented and well experienced defender, watching how this story pans out will be absorbing, with Monaco hoping the Spanish connection between Llorente and Moreno will be crucial in their quest to secure his services.