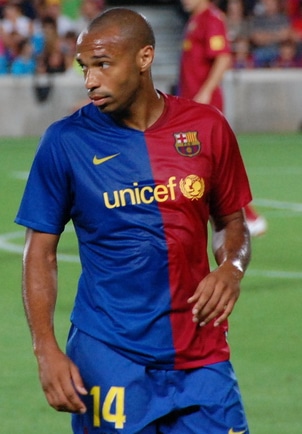 Thierry Henry has confessed that Pep Guardiola is the benchmark by which he hopes to measure himself as he begins his managerial career at AS Monaco. Henry worked with the Catalan during his time at Barcelona between 2008 and 2010 and although he spent longer and enjoyed his best years at Arsenal under Arsène Wenger, it is Guardiola whom Henry wishes to emulate.

“Pep is the reference, for me, I’m not saying for everyone. There’s no right or wrong; that’s the reference for me. We learnt how to play the game when I went to Barcelona under him,” said Henry at his first press conference since taking over the reins at Monaco from Leonardo Jardim. “The invention he had, he’s well ahead of the game, I saw it closely. You learn from people; they inspire you. But you also need to put your own little mix in it.”

Henry will take charge of his first game this weekend, when Monaco host mid-table Strasbourg on Saturday. The Ligue 1 giants have suffered a torrid start to the season thus far, winning only won of their opening nine games. They are currently languishing in 18th position, which is why Jardim departed the club last week by mutual consent. Henry has been drafted in to turn their season around, starting with Strasbourg.

The Frenchman has little managerial experience thus far, having only served on Roberto Martinez’s backroom staff for the Belgian national team for the last two years. However, he has a close connection to Monaco since he began his professional playing career there and helped the team to the Ligue 1 title in 1997. He had been strongly linked with the Aston Villa job in the English Championship – which has now been filled by Dean Smith – but when Monaco came calling, the emotional pull was too strong to resist.

“When the offer came it was quite logical; my heart talked. You know the connection I have with one club in London, but this is where I started,” he explained. “This club will always have a big place in my heart. So to be able to come here and start here again is a dream come true, I won’t lie. There’s a lot of work to do, as you can imagine, but I’m more than happy to be here.”