Why Augustin offers a viable option upfront for AS Monaco Finding minutes hard to come by since joining AS Monaco on loan in the summer from RB Leipzig due to Islam Slimani and Wissam Ben Yedder being in absolutely scintillating form, Jean-Kevin Augustin’s importantly found some traction in the last week.

Handed just his second start and fourth overall appearance by Leonardo Jardim last week for Monaco in their Coupe de la Ligue clash with Olympique Marseille, Augustin’s promising display vindicated his manager’s decision. Scoring a brilliant goal and playing a key role in his team’s second in their stirring win over Andre Villas-Boas’ men, he then backed this up by enjoying a solid cameo off the bench vs. Saint-Etienne.

When recently speaking on his gifted charge, Jardim made a point of highlighting what he brings to the team, stating: “He has not played much in the last three games. In Nice he started. He is a player with quality, physically strong. He wins a lot of times, he’s not a scorer like Ben Yedder. With his physique and movement, he can help to score. This is what is expected of an attacker.”

Demonstrating why he’s such a highly regarded prospect, who justifiably also attracted interest from the likes of Sevilla, Real Betis, Everton and OGC Nice in the summer, Augustin’s recent form has been a big positive for the Monegasques. Giving his team something different upfront and proving himself to be a viable alternative to Slimani and Ben Yedder, his dynamic skill set constantly asks questions of defenders.

The 22-year-old’s lethal runs in behind are a great place to start, for he strategically angles, curves and directs his bursts to gain separation from his marker to be a threat. Quick to recognise when a teammate has his head up and is in a position to spot him, he times his runs shrewdly so he can go forth unimpeded. Keen to exploit the blindside, the gaps between defenders or when his striking colleague attracts the attention of a nearby defender, Augustin’s swift to make his move to take advantage of any openings. Top blindside run in behind

Aided by his blistering pace that ostensibly means he’s nigh on impossible to catch when in full flight, and this only enhances his menace.

Augustin’s movement inside the box to get goalside of his man or hold back his runs has been another upside, for he instinctively scans where the most damaging areas to take up are and duly moves to supply an option. His goal against Marseille demonstrated this aptly, where he found a pocket of space to receive in before controlling the ball expertly and then applied his searing finish. Clinical finish to open the scoring vs. Marseille

Meanwhile, when the physical attacker drops deep, he’s proven competent in doing so too, where he’s connected play neatly and evidenced how well he can identify unoccupied spaces. Top job receiving between the lines

A key byproduct attached to this aspect of his armoury comes from how it generates room for teammates to exploit, as his deep runs or checks towards the ball draws defenders out of shape. This subsequently leaves gaps in the opposition backline that his fellow attackers or onrushing midfielders can take full advantage of. Smartly pinning his man to create space for Henrichs Augustin cleverly drops to generate room for a teammate

A powerful dribbler who relishes taking on opponents 1v1, the former Paris-Saint Germain youth product is certainly a tough man to contain. While he’s got some nice moves to beat opponents in slower build up, including some wicked changes of pace and direction and shoulder drops to cut inside, he’s probably at his most damaging when marauding forward in transition. In these situations, his explosive set of attributes ensures he’s a real handful with the ball at his feet against retreating, unset defences.

Gaining separation from his markers both on the dribble and with his movement, Augustin’s demonstrating to his manager how valuable he can be for Monaco both as a starter or off the bench.

Although he’ll have to patiently wait for his chances as he’s currently behind first choice strikers Ben Yedder and Slimani in the pecking order, if he can keep producing the goods, there’s every chance he’ll be granted more minutes on his path to becoming an integral component of this Monaco outfit. 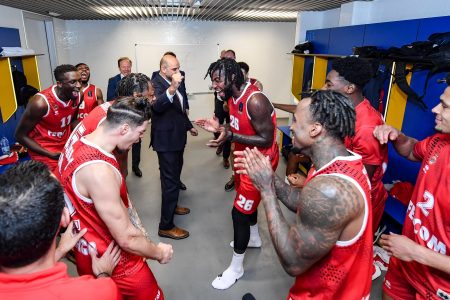