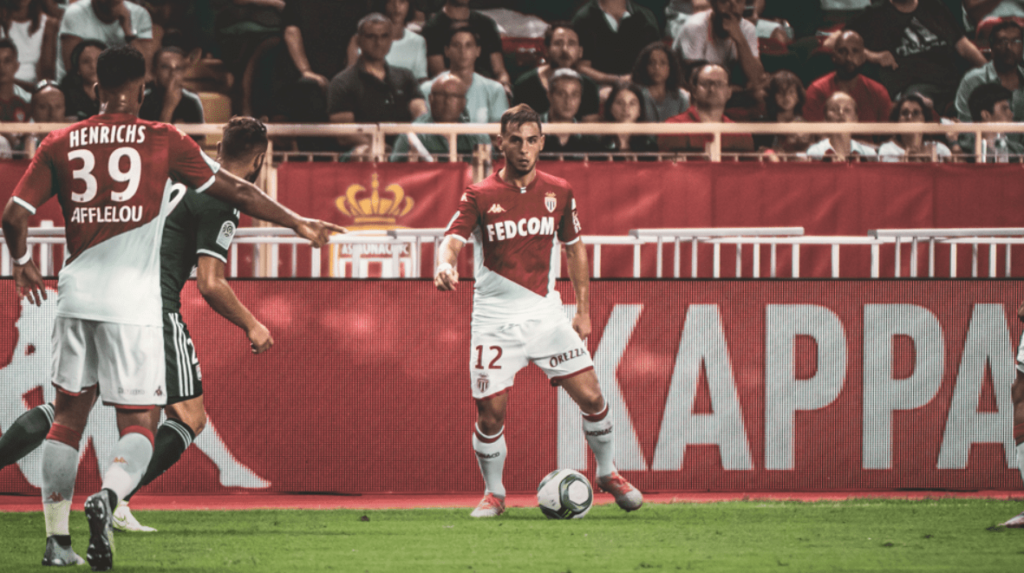 Although it hasn’t all been plain sailing for Ruben Aguilar since joining AS Monaco from Montpellier, as he’s already received two red cards and struggled to have the impact he would’ve liked, it was encouraging to see him prove his worth in his team’s thumping 5-1 victory over Lille.

Granted just his seventh league start by Leonardo Jardim for the must win clash against Les Dogues on the weekend, he didn’t disappoint on his way to supplying two assists and putting in an exceptional performance from his right-wing back post.

In what was unquestionably his finest outing in a Monaco jersey, Lille found him a formidable foe to handle on both sides of the ball. Defending with plenty of intensity, aggression and vigour, Aguilar helped set the tone for the home side with his pressing and hard-nosed approach.

So tough to beat in duels due to his balance, low centre of gravity, reading of the play and strength, the diminutive Frenchman undertook his stopping duties effectively. Whether it be marking Lille’s left back or left winger, Domagoj Bradaric or Jonathan Bamba respectively, Aguilar was wide awake to their presence in his designated area of operation, hardly giving them an inch. Regularly getting touchtight and reacting to triggers like an opponent receiving with their back to goal, this ensured they had minimal opportunity to execute their actions coherently.

Quick and boasting exceptional acceleration, the way he tracked runners in behind and into the box was another highlight. If an opponent nearby interchanged position or dropped into a teammate’s zone, it was important to note how he’d communicate this with a colleague so they were aware of this. His nous also transferred over to instances when his nearby central defender stepped out to follow their man, as he’d drop back and cover their position to ensure structural stability.

While his defensive output was of a high standard, there’s no doubting he made the keenest impact on the offensive end, with him running riot with his speed, dynamism and technical qualities.

To start with his movement, and the 26-year-old’s athleticism, in combination with his ability to time and coordinate his movement with his colleagues, were crucial factors towards his success. When his winger, Gelson Martins, tucked infield, Aguilar would overlap, and when he’d hug the touchline, this was the cue for Aguilar to overlap. 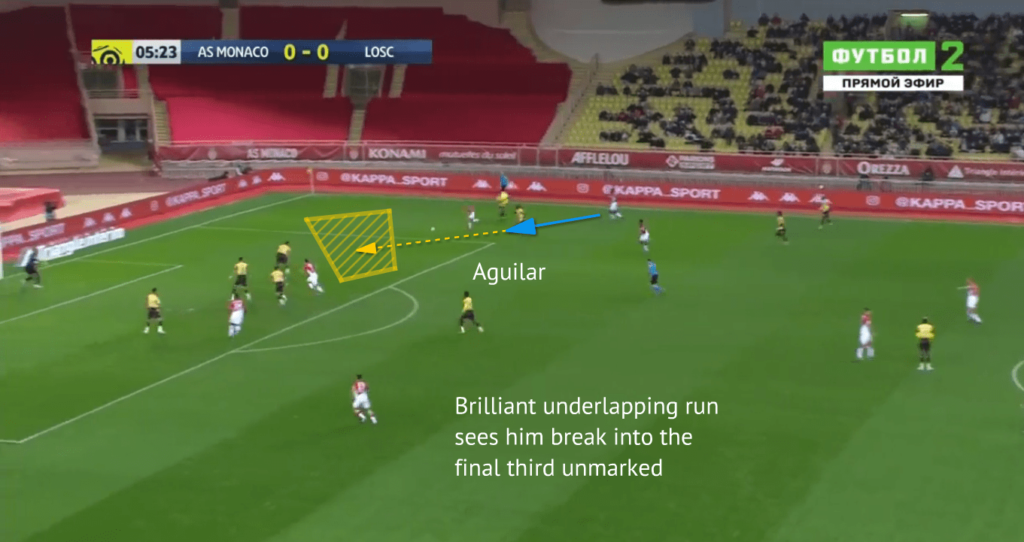 Fantastic underlapping run into the box

Powerful and determined, his relentless running and stamina saw opponents struggle to keep up with him, thus meaning he regularly stretched his opponents horizontally and vertically and got himself into good locations within the final third. From here, he could either keep dribbling, whip in a cross or fire in a cutback to place Lille’s backline under pressure. 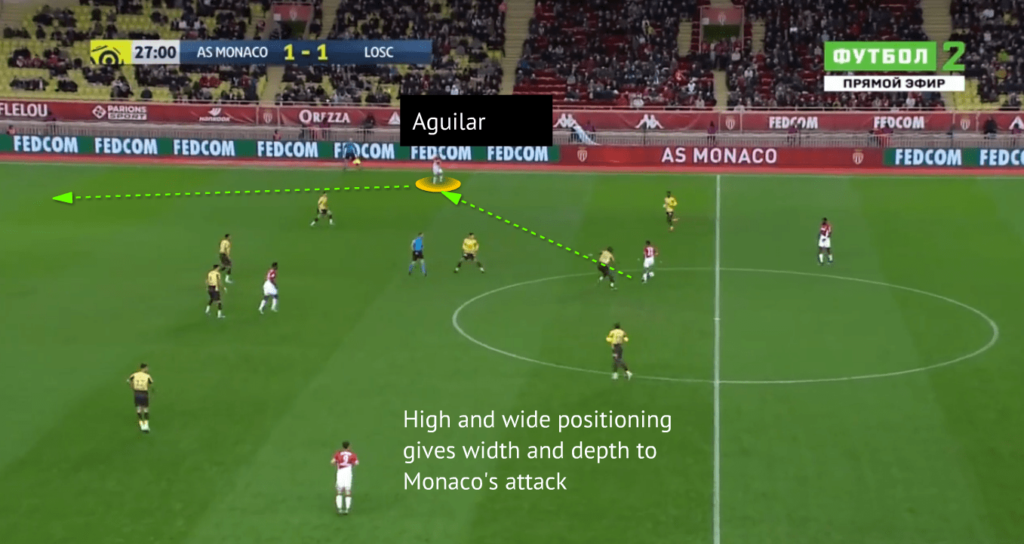 High and wide positioning gives width and depth to the attack

Indeed, his two assists offered a glowing testament to his capacity to get into wonderful areas and service his attackers. Firstly, he took advantage of the space out wide when Martins drew his man centrally before receiving the ball, as he then proceeded to whip in a masterful cross that was perfectly struck for Keita Balde to head home. Then, the second saw him maraud forward into the box unmarked, before having the presence of mind to coolly pinpoint Wissam Ben Yedder, who did the rest. 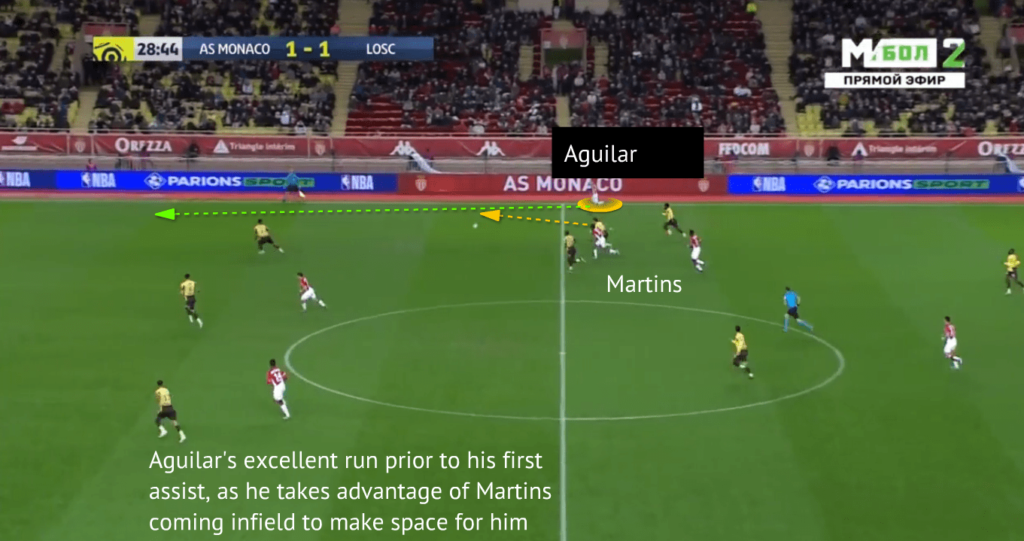 Wicked overlapping run prior to his first assist 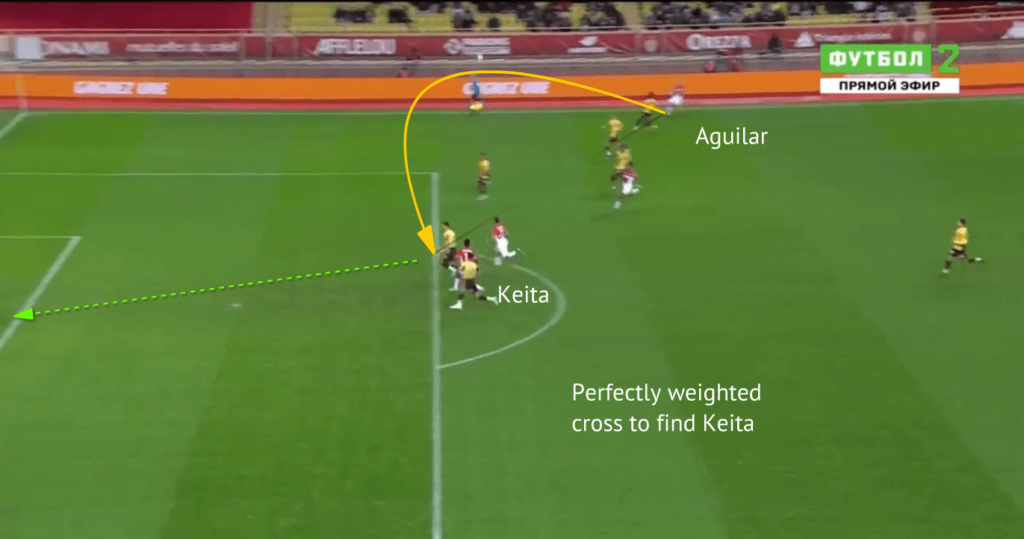 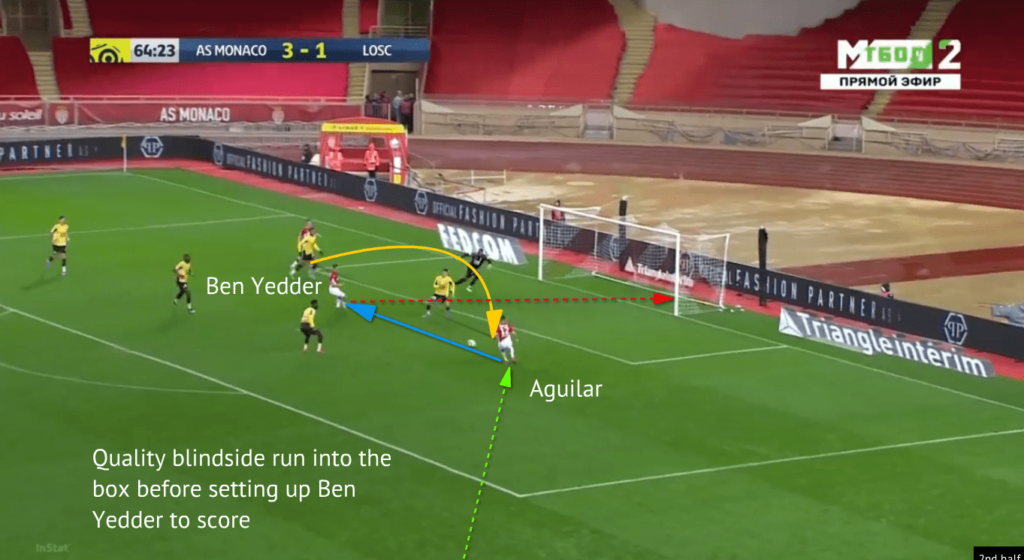 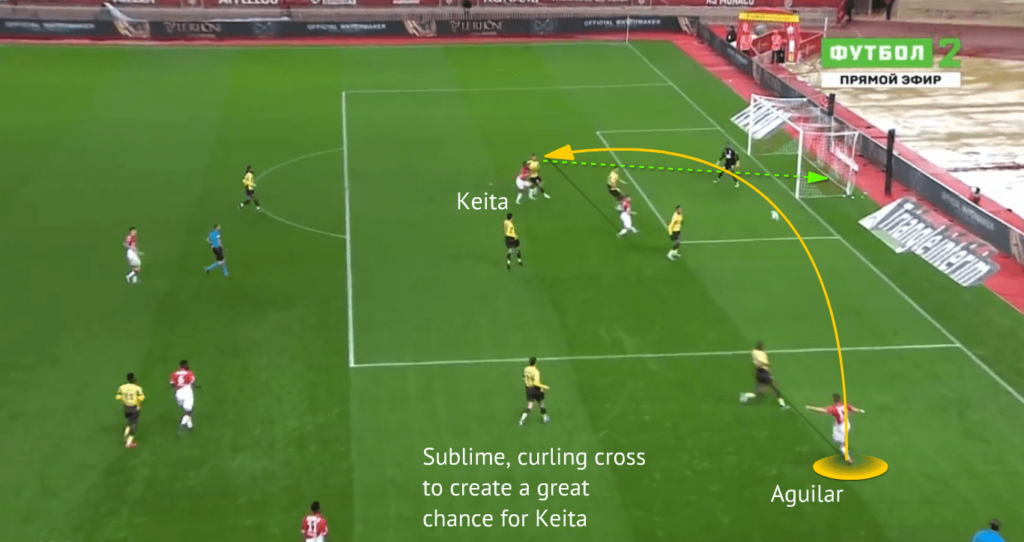 Wonderful cross to set up a fantastic chance

Also engaging in some positive combination play, including some neat one-twos and layoffs that he used to exploit the space behind his man when they pressed him, and playing some precise through balls, these were extra avenues he explored to give his team an edge. 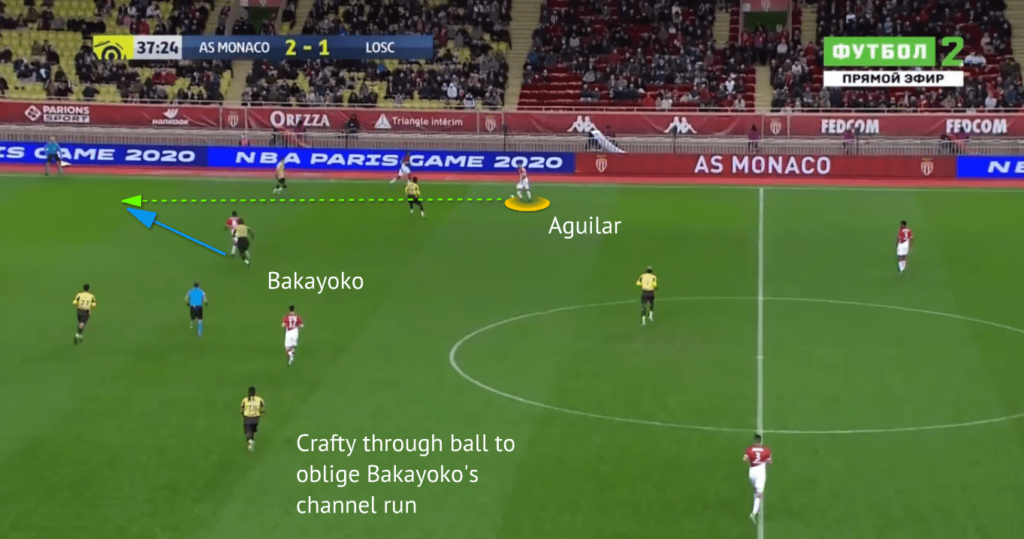 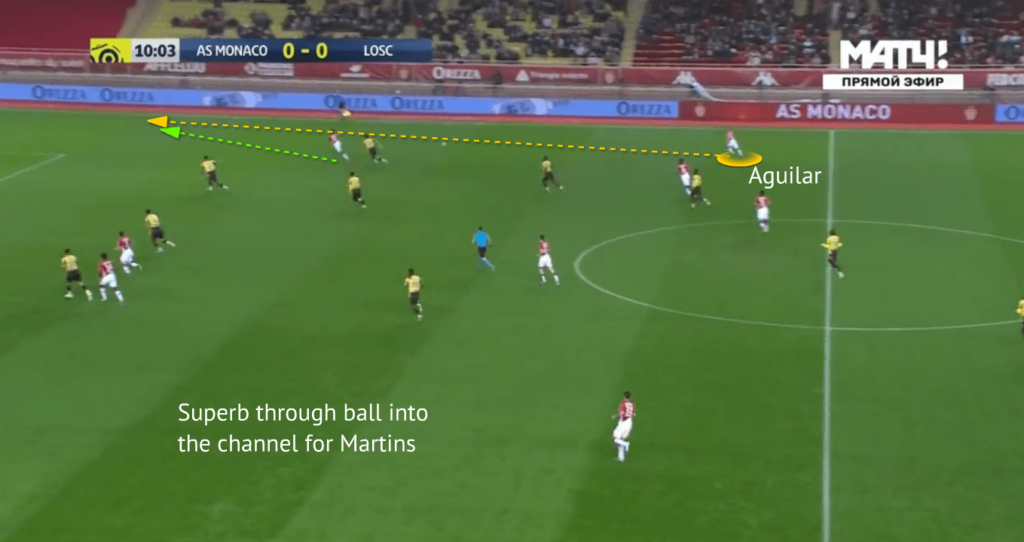 Aguilar’s incisive through ball into the channel

Showing great composure on the ball with his touch and control too, he dealt with high pressure situations admirably to find solutions, as his work with the ball at his feet was very accomplished indeed.

Upon examining his statistics, and these suitably illustrated his worth, for he completed five touches inside the box, three shot assists, two accurate crosses, two dribbles, two progressive runs, all six of his attempted passes into the final third and won five of his seven defensive duels.

Displaying precisely why he earned the reputation as one of Ligue 1’s finest wide defenders at Montpellier and why Monaco were so eager to spend €8 million on him in the summer, Les Monegasques will be hoping this will be the catalyst for him to really begin to stamp his mark on the French Riviera.