Masterful Tchouameni continues to thrive with AS Monaco

Energetic, authoritative and oozing class, Aurelien Tchouameni’s man of the match display against Bordeaux further underlined what an exceptional player he’s developing into.

Running the show against his former side, Tchouameni, who was fresh from receiving another call up to the French squad, played with maturity, discipline and intelligence on his way to shining in all phases of the game.

“We are very happy to have him with us at AS Monaco. He is becoming a real leader in this team as he did today in midfield,” insisted Niko Kovac after the 3-0 win.

“Bravo to him for his selection with the Blues. I’m going to speak with Didier (Deschamps), so that he doesn’t make him play too much (smile).”

Operating alongside talented youngster, Eliot Matazo, as part of Monaco’s midfield double pivot, Tchouameni led by example and set the tone for not only Matazo to follow but also for his team as a whole.

Forceful yet intelligent with the minimal stopping work he had to get through due to Monaco dominating large sections of the game, he chimed in with many key interventions. So athletic and reading the play coherently, this saw him cut out passing lanes into attackers, rapidly counterpress or get back to support his teammates to stop transitions and understand where best to position himself depending on the situation.

In addition, how he used his strength to unbalance opponents, long legs to reach in to recover the ball and aerial prowess to be an asset on set pieces or win second balls amplified his worth.

Once in possession, Monaco’s midfield maestro demonstrated his quality here too, for he gave his team control and helped dictate the tempo with his measured passing.

Striking his passes with confidence, Tchouameni’s ability to hit some line breaking passes to find the likes of Wissam Ben Yedder, Aleksandr Golovin and Kevin Volland in advantageous areas between the lines generated many promising openings. Moreover, the way he spread the play, recirculated possession patiently, engaged in some tidy combination play and launched crisp through balls in behind added to his threat.

A powerful dribbler and relishing every chance to drive forward with the ball at his feet, this compartment of his game was another highlight. Unfazed by incoming pressure and backing himself to keep possession due to his good touch, ball control and ability to shield the ball using his imposing frame, opponents found him a tough man to dispossess. The perfect example of this arose in the lead up to Monaco’s second goal, where he cleverly outfoxed two markers before pinpointing Ben Yedder, which kickstated the passage that led to Golovin scoring.

Meanwhile, his movement and positional sense played a valuable role as well, for this gave him the platform to link play by persistently offering himself as an option. Whether supporting wide attacks, strategically forming overloads during build up or offering an outlet underneath or behind the press, Tchouameni cleanly identified what spaces to occupy.

His aptitude here importantly transferred up the pitch too, where his awareness was vital in helping him get into encouraging shooting locations around the box from which he could then fire off shots on goal.

Indeed, his anticipation to quickly pick up the ball drop for his goal owed much to the aforementioned, with him reacting swiftly to set himself, thus meaning he could get adequate purchase on his ultimately successful shot.

How he pinned and drew markers towards him to open up central passing lanes into the feet of his attackers deserved mention too – something which is aptly depicted in the graphic below.

By the numbers, his 15 ball recoveries, 12 won duels, nine interceptions, three won headers, five shots, four accurate long balls (from six attempted) and eight accurate passes into the final third (from nine attempted) accentuated what a force he was.

Backing up his polished display against Real Sociedad in the Europa League with an immense effort vs. Bordeaux, the way Tchouameni continues to go from strength to strength has been a joy to watch. Named as Monaco’s MVP on their official website and in L’Equipe’s team of the week, this was further recognition of his accomplished efforts and was the perfect way to cap off his 60th match for Monaco.

When asked why he’s improving so rapidly and the reasons behind his meteoric rise, his answers gave an insight into his humility, strong work ethic and desire to keep learning, which have certainly been formidable pillars towards his success. “I think that in terms of consistency, whether during games or even in certain periods, I am more consistent compared to my debut here or even the start of last season. As the coach said, I am a curious person and I often ask questions, to constantly improve myself, to progress, whether in club or in selection elsewhere,” he explained.

“I know there has been a higher expectation around me. But my status hasn’t necessarily changed. The coach gives me the instructions in the same way as before. I just know I have more responsibilities now. I try to stay the same, not to change my way of being.

“I approach the matches in the same way. I play according to the coach’s requests and what is good for the team. When I’m in Monaco, I try to think as little as possible about the France team. Being an international is a different status but at a young age I still have a lot to learn.”

Heading into the international break in sparkling form and right on top of his game, Tchouameni will be hoping to stamp his mark for Les Bleus and replicate his recent performances for Monaco when given a chance.

Incredibly still just 21 despite playing like a seasoned veteran, the sky’s the limit for what the outrageously gifted Frenchman can achieve. 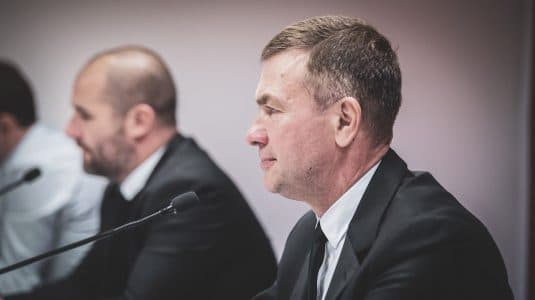