Two men who impersonated a French Minister sometimes using silicone masks have been jailed in Paris, after they duped several people out of more than €55m (£48m). They were charged over the impersonation of Jean-Yves Le Drian and the planned impersonation of Prince Albert II of Monaco.

The court found Franco-Israeli citizens Gilbert Chikli, 54, and Anthony Lasarevitsch, 35, guilty and sentenced them to prison sentences and paying hefty fines. Chikli faced the heaviest sentence of 11 years and a €2m fine, and Lasarevitsch 7 years and €1m.

The scheme, which took place from 2015 to 2016, involved fraudsters posing as Jean-Yves Le Drian, the then-Minister of Defence, to ask politicians and wealthy executives for financial aid for “secret operations carried out by the French state”.

Chikli and Lasarevitsch were considered the masterminds of the operations, whereas five other defendants faced lesser charges. One was released on Wednesday and four others received sentences ranging from suspended 15-month terms to five years.

As the sentence was handed down, Chikli shouted, “it’s a scandal. You should be ashamed.”

One would appear in video conferences behind a fake official desk complete with flags and a portrait of the then-President François Hollande, all the while wearing a silicone mask of Le Drian. More than 150 people were targeted, of whom three were successfully scammed. 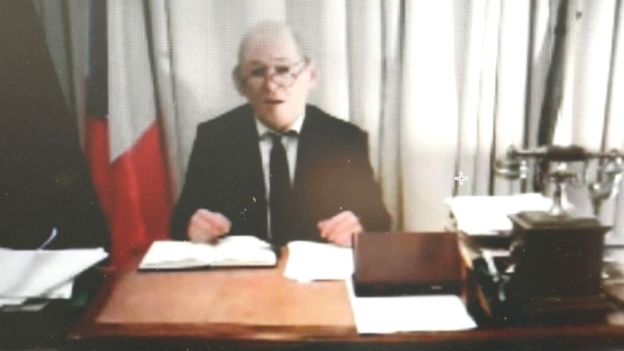 These targets included Aga Khan, the spiritual leader of Ismaili Muslims, who paid €20m across 5 transfers; İnan Kıraç wired €47m in what he believed to be ransom money for journalists held hostage in Syria.

Others targeted unsuccessfully were Ali Bongo, Gabon’s president, the Archbishop of Paris, the French Aids charity Sidaction, and the CEO of the cement company Lafarge.

Chikli was extradited from Ukraine and arrested in 2017 alongside Lasarevitsch. One defendant was solely charged for the suspected Prince Albert II impersonation.