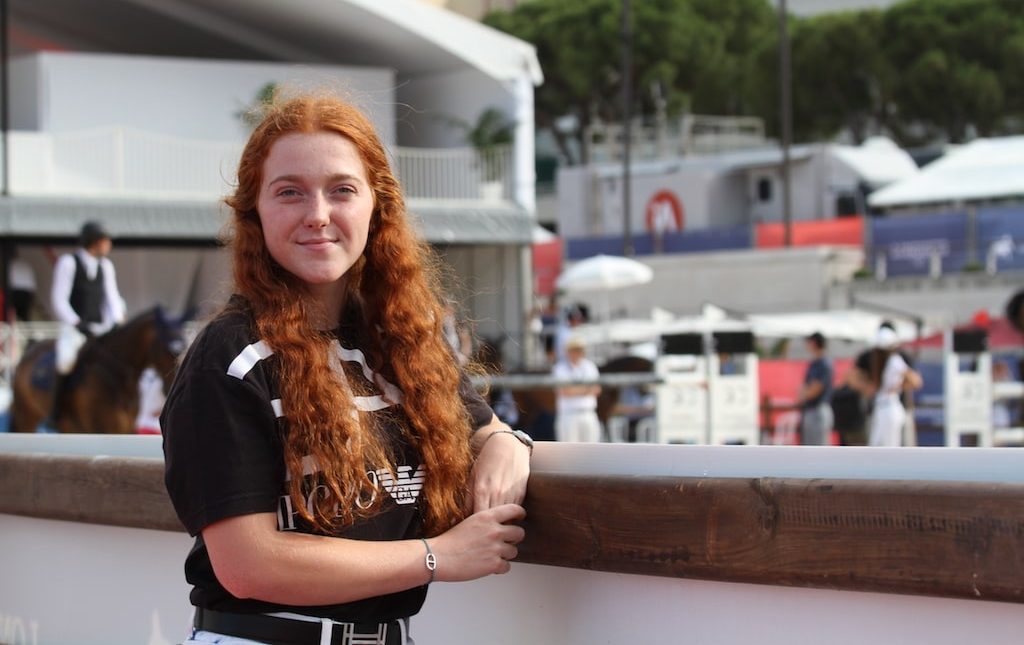 Almost 18 years old and having just passed her Baccalaureate with honours, Laura Gramaglia has not finished surprising us. Passionate about horses since she was a child, the Monegasque is preparing to compete in her first equestrian endurance world championships (U21) in September. Portrait of an athlete with a big heart.

It all began a few kilometres from the Principality, in the heart of the Villeneuve-Loubet riding club, nestled in a lush green setting of nearly 25 hectares. “She must have been a year and a half old,” recalls her mother, with a smile, as she recalls the fond memories of the escapades she enjoyed with little Laura. “I had a horse and I used to hold her in front of me in the saddle. I think I passed on this passion to her. Laura grew up in this environment”.

The photo (see below) that we were lucky enough to come by is proof of this. It shows Laura with her red curls in her mother’s arms. Sixteen years later, it is alone, on the back of Raya de Galonne, an experienced mare (14 years old), used to high level jousting, that Laura Gramaglia rides on backcountry trails, for long hours, over distances sometimes close to what is practised in cycling on the Tour de France routes.

Laura has a gentleness that allows her to be in harmony with the animal.

“I discovered equestrian endurance by chance,” says the young woman. “The day I tried it, I never stopped”. A demanding discipline, different from dressage, which consists of covering long distances (up to 160 kilometres) over periods sometimes approaching eight hours of racing. This impressed her trainer, Henry-David Guedj, a member of Team EFG Monaco.

>> READ MORE: Discovering the Children of the Equestrian Federation of the Principality of Monaco

“In life, I am also a martial arts teacher. I train every day. But the first time I did an equestrian endurance race of 120 kilometres, I was sore for almost a week,” he admits. “You can imagine what that means for a 16-year-old girl… That’s how impressive Laura’s skills are in this discipline.”

During her childhood, the graduate who is about to study at SKEMA Business School never missed an opportunity to ask her mother for toy horses. “Every time she lost a tooth, I had to give her a figurine,” she laughs. A passion that is reflected in her interactions with horses today. “Laura always listens to her mare,” says Henry-David Guedj. “She has a gentleness that allows her to be in harmony with the animal. This is important in endurance, because over long distances, you have to know how to guide the horse, without rushing it, by showing it where the obstacles are, such as roots or crevasses.”

A taste for entrepreneurship

A deep love for animals and horses, which today opens doors to the highest level. “I would like to make a career of it, but I remain clear-headed. Not all equestrian endurance competitions offer prize money,” says this talented designer, who has been working on a personal project for two years. “I would like to launch my own business. I have an idea, in the culinary world. But I prefer to keep it secret for the time being”.

Laura has managed to draw from a perseverance that I greatly admire.

In September, and after having already obtained very promising results in her discipline, the Monegasque rider is preparing to defend the Principality’s colours in the Netherlands at the U21 World Championships. “I am proud of the young woman she has become,” says Marie-Pierre Gramaglia. “Laura lost her father quite young, we both built ourselves up and she has managed to draw from a perseverance that I greatly admire.”

Now ready to pursue her sporting and professional career at the same time, Laura Gramaglia could become one of the figures of Monegasque sport in the years to come. In any case, the young athlete is giving herself the means to achieve this. “Laura follows an intense programme, with two physical training sessions per week in addition to a strict diet,” says her coach. “She also rides two or three times a week for long hours”. The price of success.

>> READ ALSO: Iñigo Lopez, Monegasque rider: “Why not compete in the Olympic Games one day?”