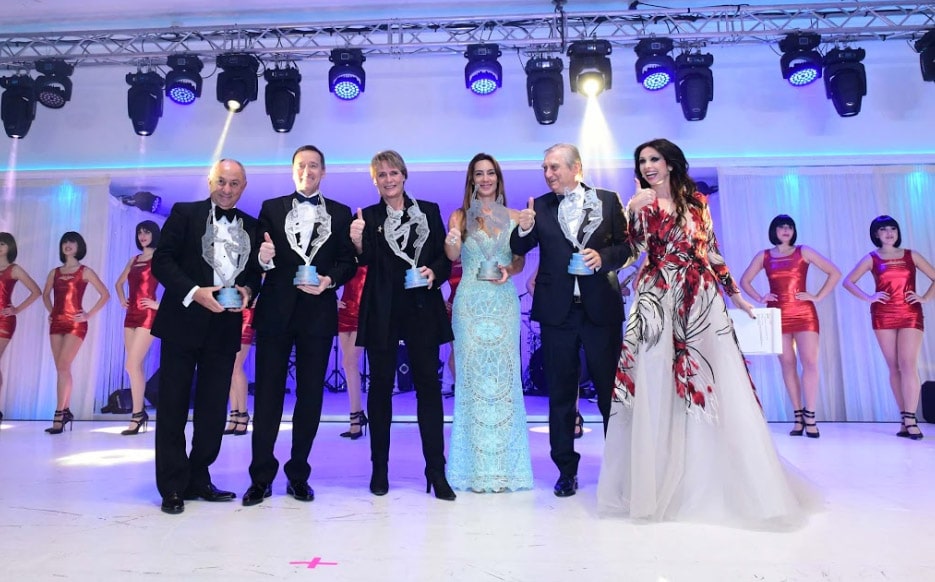 The great international event, the Monaco World Sports Legends Award, took place in Monte Carlo. It is for sport, and it’s finest champions. The Media Day was held on Friday 7th December while on Saturday 8th the 3rd Award Ceremony and Gala Dinner with Red Carpet were held in the Salle d’Or of the Fairmont Monte Carlo, situated in the famous bend of the Formula 1 Grand Prix.

It was an unforgettable evening, produced by Promo Art Monte-Carlo Production and bringing together sporting stars with entertainment, art, fashion and glamour to make the WSLA a unique international showcase and an exclusive VIP Red Carpet: the Oscars of Sport.

The event was presented by the international ballet star Lorena Baricalla, Ambassadress and Master of Ceremonies for the Monaco World Sports Legends Award.

For this 3rd edition, the list of those who received the World Sports Legends Award presented the greatest world sporting champions:

The WSLA Posthumous Award was given to the Brazilian, Ayrton Senna 3 times Formula 1 World Champion and one of Formula 1’s greatest legends.

Lastly, the WSLA Best Values for Community Support recognised Doctor Claudio Costa, the Italian doctor and founder of the Mobile Clinic in MotoGP that has saved the lives of many champions.

The prestigious Prize awards sporting champions, men and women, both active and retired, who have gained distinction not only for their sporting exploits but also for their example, which is an inspiration for the new generations.

The special prize “Best Sports Values” awards an athlete who stands out for an exemplary sporting gesture which embodies sport’s ethical and moral values, or to well-known people for their community support through sport.

The “Posthumous Awards” is conferred on great champions with legendary careers or to well-known people who operated in the sporting sector.

The Monaco World Sports Legends Award aims at promoting sport’s ethical and moral values as ideals to motivate others, especially the young, to excel.

It also benefited from the support of the Automobile Club of Monaco and the Monte Carlo Board of Tourism and Congresses, and as well as the partnership of the Sun Casino.

For the third consecutive year, Radio Monte Carlo of the Mediaset Group was the Official Radio of the WSLA.

The World Sports Legends Award’s Red Carpet is among Monte Carlo’s most prestigious and has become the place to be. Consequently, the event was attended by a fine array of world sporting champions, international stars and VIPs.

The Gala, conceived as an American-style show, included entertainment with performances by the corps de ballet, the orchestra, and the guitarist Massimo Borelli.

The first day of the programme featured The Media Day on 7th December. In the venues of the Fairmont Monte Carlo, and included the WSLA Talk Show “Sporting Stars: The Men or the Women behind the Champion” and “Show, Art and Fashion” hosted by the Ambassadress Lorena Baricalla; the Handprints Show for the creation of the champions’ handprints by artist Marcos Marin; and the Art Show put on by Century Time Gems, Official Partner of the event.

Then, the Official Press Conference was held in the late afternoon in the Salon des Princes at the prestigious Automobile Club de Monaco, followed by a cocktail.

Finally, the day concluded with the Awarded Dinner in the Automobile Club de Monaco’s exclusive and private “Cellier” (the Cellar) – a privileged place that can only be accessed by VIPs at an international level.

On 8th December the Awards Ceremony with a Gala Dinner-Show was held in the Salle d’Or at the Fairmont Hotel, preceded by the Red Carpet with Cocktail in the Crystal Gallery.

The prestigious evening ended with the After Ceremony Red Carpet and the WSLA Party at the Sun Casino.

The WSLA is an event which is enjoying ever greater success, and only two years since its inception, on its 16 social networks and web channels, the photos and videos of the Oscars of Sport attract around 4,200,000 views per year. Italy announces its roadmap out of lockdown