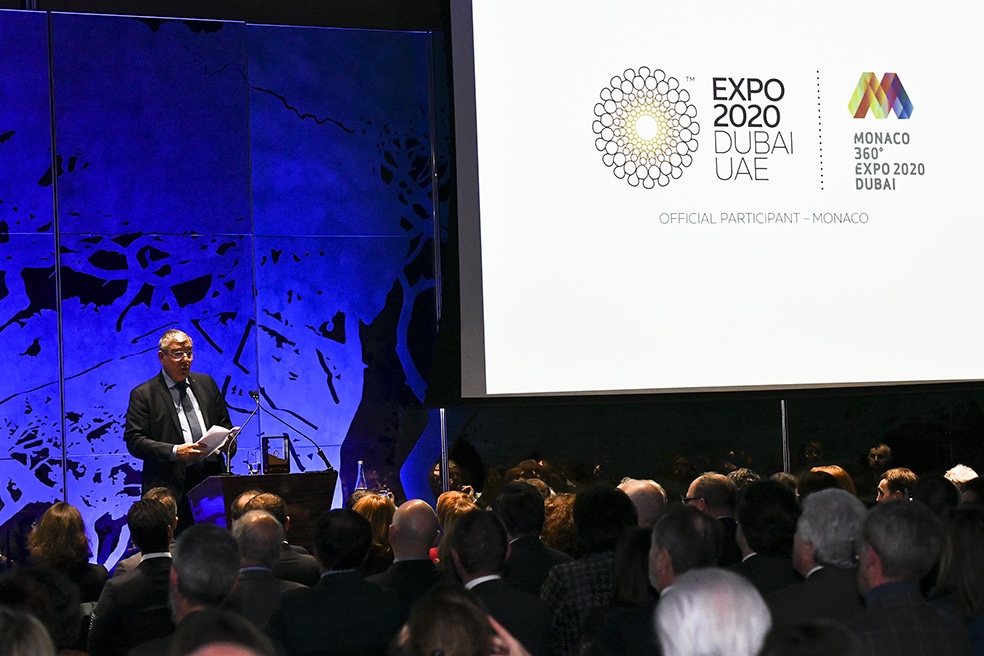 On Wednesday, February 27, in the presence of Prince Albert II and Sheikh Abdallah Ben Zayed Al Nahhyan, Mrs. Mireille Pettiti, President of Monaco Inter Expo and Albert Croesi, Commissioner General of the Monaco Pavilion in Dubai, presented the Pavilion which will highlight the Principality of Monaco at the next World Expo in Dubai in 2020, whose general theme is “Connect the spirits, build the future!”

With the theme “Monaco 360 °, a world of opportunities”, the Monaco Pavilion, which will occupy more than 1,700 m2, has been designed to surprise and fascinate. Built by Olivier Deverini in collaboration with the OOS agency, and led by the company Facts & Fictions, it will have a polygonal shape symbolising all facets of Monaco, including the commitment of the Sovereign Prince for the protection of the environment.

Thus, the Pavilion, thanks to its photovoltaic panels, will ensure its energy autonomy: it will also be equipped with a greywater recycling plant.

At the entrance of the Pavilion, visitors will be greeted by a large iconographic fresco on the history of Monaco. They will then enter the “Garden of Opportunities” composed of 6 stations: art and culture, science and research, Explorations of Monaco, protection of the oceans and biodiversity, extension at sea and innovation and technologies. In the centre of the garden, a kaleidoscope will immerse the public in the atmosphere of the Principality in 360 °! To make this pavilion live during the 173 days, the following entities have confirmed their participation: Prince Albert II Foundation, Princess Charlene Foundation, Monaco Olympic Committee, Monaco Scientific Center, Oceanographic Museum, Monaco Economic Board, Tourism Directorate and of Congresses, Mission for Energy Transition,

It should also be noted that a group of high school students from FANB will present a project entitled “The School of Tomorrow” and that Monaco Inter Expo will launch job offers for young students wishing to live an unforgettable experience by participating during 6 months at this extraordinary event!

In this regard, the line of clothing worn by the staff of the Pavilion will be designed by Ms. Pauline Ducruet.

Finally, the National Day of Monaco will be celebrated on Wednesday, November 13, 2020.