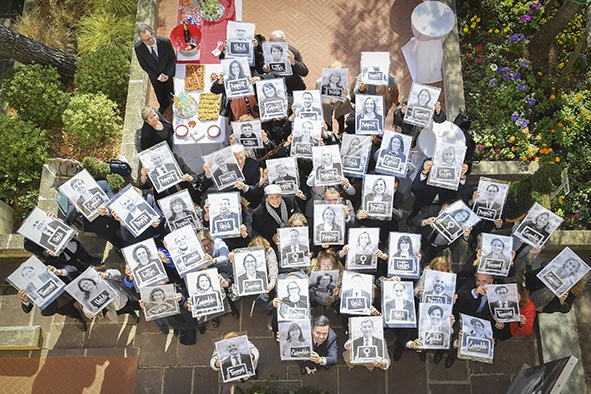 On the occasion of International Women’s Rights Day, Céline Cottalorda, Technical Advisor, Delegate for the Promotion and Protection of Women’s Rights, in the presence of artist Anthony Alberti, Mr One Teas, proceeded this morning to the inauguration of his photographic work displayed on the facade of the Ministry of State.

Composed of 76 black and white portraits, it honours all those who participate in the work of the Committee for the Promotion and Protection of Women’s Rights. “I was keen to highlight the women and men of the Committee but also those I have met and supported since its inception,” says Céline Cottalorda.

The partners of the operation have been associated, as well as the personalities representing the Monegasque institutional entities who, through this gesture, are committed to supporting equality between women and men, the theme of the day of 8 March.

The photographed people were invited to choose one of the slates, each bearing an inscription:

The Sovereign Prince has agreed to participate in this initiative. Along with the Minister of State, the President of the National Council, the Mayor of Monaco and the Councilors of Government-Ministers, all eager to contribute to the success of the operation #8MarsMonaco.

“My goal,” said the artist, “is to create real smiles from those who have chosen the values they want to represent.”

In order to reach a wide audience, the photographic work has been available in various media: in the press, on Monaco Info and on the social networks of the Prince’s Government under the title #8MarsMonaco.