Now back at AS Monaco again and happy in his surroundings, Tiemoue Bakayoko’s improved form’s been a real positive this season.

Rejoining the Monegasques after a challenging couple of years since joining Chelsea in 2017 for £40 million, where he struggled to cement his place and didn’t see eye to eye with the club, his return to Monaco has been the catalyst for him returning to a level resembling his best.

Having spent an encouraging campaign on loan with AC Milan last term, the experienced and battlehardened 25-year-old gave a fascinating insight into his time at Chelsea when speaking to Eurosport. “Playing in those two great clubs, [Chelsea and Milan], helped me develop, helped become who I am today. [But] I don’t really want to talk about Chelsea because I don’t want to get on their bad side,” he said.

“There are reasons [why it didn’t work out]. There are things that aren’t explainable. Things that will stay between me and them. It didn’t click, at least not how I wanted to. Yes, there’s a bit of disappointment, but sometimes in life there’s disappointment. But you need to carry on.”

Since being loaned to Monaco and reunited with Leonardo Jardim, who was such an instrumental figure in getting the best out of him during his first stint with the club, he’s wasted little time in becoming a key figure within the Portuguese tactician’s plans.

“He wins a lot of balls, brings balance to the team. He passes the ball well and wins his duels. That is Bakayoko’s role,” explained Jardim.

Providing structural security and shielding the backline sternly, the physically imposing and combative Frenchman’s been vital on the defensive end. Exercising sound judgement when to jump out and press, hold his post to block passing lanes, shift laterally, drop back or pick up marking assignments in his designated area of operation, he’s undertaken his duties cleanly. In addition, if a teammate is caught upfield or loses their man, his reading of the play ensures he’s awake to this and duly gets across to offer support to his team. Bakayoko reading the play smartly to chime in with an interception

His awareness also means he’s quick to pounce on loose and second balls to recover possession for his team, so they can attack again.

Applying his challenges with force and usually good timing, he’s done a fine job of breaking up attacks with his aptitude here. This aspect of his play accompanies his aggressive pressing and counterpressing too, which sees him react sharply to triggers like a pass into wide areas, a backwards pass or when anticipating a pass back infield when his target is in an open body posture or with their back to goal. By angling his harrying, this sees him importantly block pass lanes behind him with his cover shadow.

An admirable competitor in aerial confrontations too, he wins his fair share of duels by using his leap, judgement and strength to rise above his adversaries. Energetic, tenacious and extremely fit, there’s no doubting how vital his stopping efforts are to Monaco’s setup.

Bakayoko’s worth’s been just as keenly felt on the attacking side, where he’s played his part in connecting, constructing and breathing life into offensive patterns. Using his solid head scanning and movement, these have given him a firm platform from which to go about his work. Indeed, by knowing where his teammates, opponents and the vacant spaces are located in relation to the ball, he subsequently takes up promising positions to receive possession.

Aiding his team’s build up by generating numerical and positional superiorities, he’s helped form ideal triangular and diamond like shapes to offer good angles to be an outlet to beat the press. Serving as the free man as Monaco generate a 5v4 Helping create a 5v4 to progress the attack

Often serving as the free man and knowing how best to inherit possession due to his scanning, he identifies when to turn and control in one motion, protect the ball, play a first time pass or move away to gain separation.

Also on hand to support wide attacks, provide a good option for a backpass to reset attacks and embark on dangerous forward runs in behind when the opportunity presents itself, this has only amplified his threat. 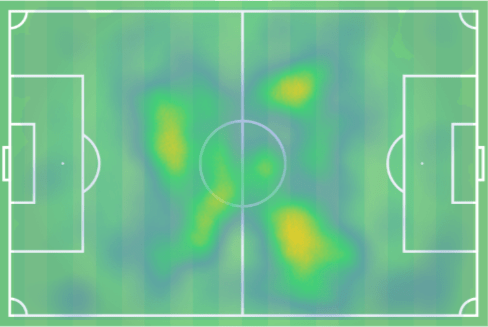 A powerful ball carrier, who remains composed and calm on the ball, watching him use his skills to beat his man and to buy time while executing his decisions has been a highlight. Using his acceleration, sharp changes of direction, smart shimmies, shoulder drops and wicked feints, he’s demonstrated his value in these instances.

Passing the ball with conviction and knowing when to play it safe or go for a more expansive pass, Bakayoko’s distribution has also caught the eye. Great at getting the ball into the feet of his more dangerous midfielders and attackers, on most occasions he’ll look to move the ball quickly to get at the opposition. Aside from recirculating possession purposefully while waiting for a weak spot in their foes’ setups, the way he’s spotted free colleagues and runners in behind efficiently has also warranted praise. Measuring and weighting his passes nicely, there’s much to admire about how he can hit penetrative line breaking passes into the feet of his attackers, unleash tidy through balls over the top, switch the play coherently, slide balls into the channel and combine accurately in tight areas. Fantastic through ball in behind Back in familiar surroundings and working under a manager who he enjoys playing for, Bakayoko’s return to the French Riviera is certainly looking like the perfect catalyst for him to return to his best after a couple of challenging years.

Francesco Grosoli: “Monaco is attractive thanks to its stable banking and financial system and its outstanding quality of life”.