“Drones often get a bad rep”: how Erwan Grimaud is flying Monaco to the future 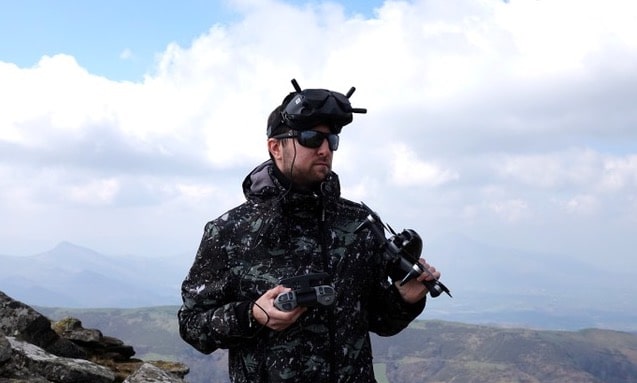 For Erwan Grimaud, drones aren’t just about capturing unique snapshots of the Principality. In fact, if there is one thing that the drone engineer and founder of MC Clic wants you to know, it’s that drones can be used for a plethora of purposes – including environmental protection.

It almost didn’t make it through the mist. But fret not, if a little shaken, the drone is doing well. “Humidity and electricity do not go hand in hand,” admits Erwan Grimaud with a smile. “Thankfully the drone wasn’t damaged when it came down, but it was soaked in moisture. We had to quickly dry the SD cards and the other hardware to avoid any lasting damage.”

The day Monaco was swallowed up by a cloud of sea mist, Erwan Grimaud was at the Oceanographic museum, busy filming the cult television program “Secrets d’Histoire” – or Secrets of History – hosted by France’s David Attenborough of the humanities, journalist Stéphane Bern. You might have seen the dreamlike pictures of the day on social media or on news outlets: Monaco covered in a thick porous mist blown in by the sea. When he saw the mist overtake the city, Erwan Grimaud did not miss a beat. He launched one of his drones, made it soar to nearly 200 metres and took a snapshot of the unique phenomenon. “I’m now waiting for the printed photo, which I will offer to the Sovereign,” he tells us.

MC Clic, a key player in the Principality

Alongside an interest in photography, Erwan Grimaud has always had a soft spot for model making, especially remote-controlled helicopters, a passion he caught from his grandfather. “When I finished university, I had no doubts about what I wanted to do: I was quite set on opening a model store that specialised in drones.” And so, MC Clic was born.

Fast-forward to a decade later, thanks to the support of private funds, his business has become a key economic player in the Principality. Grimaud admits that the venture was, at the beginning, very much a gamble: “When I started out, drones were practically unheard of.” MC Clic has dabbled in all facets of Monegasque life: From snapping the Prince’s Palace, verifying facades for architects and providing drones for public safety, to videography and coverage of world-renowned events such as the Grand Prix or the Monaco Yacht Club… In Monaco, MC Clic is almost everywhere.

Drones often get a bad rep because of people who don’t know actually how to use them, whether it is because they make them take off unexpectedly or lose them in the middle of a city due to poor piloting

“MC Clic holds 80% of the Monaco market,” informs us Erwan Grimaud. “We offer all kinds of drones, whether they are land drones or underwater drones, and we make them all ourselves.” Committed to his 5-people team, the thirty-year-old Monaco-native says has no intention of turning MC Clic into a big multinational. “My team feels like family, I don’t want to lose that aspect of the job.” However, this doesn’t mean that Grimaud does not have big plans for his business. To ensure its key role in the world of tomorrow, the shop has expanded to various countries, including Italy, Switzerland and the United Kingdom.

“Drones often get a bad rep because of people who don’t know actually how to use them, whether it is because they make them take off unexpectedly or lose them in the middle of a city due to poor piloting,” says Erwan Grimaud, who admits to having a ritual nano drone race with his girlfriend after working hours. “If you do not follow guideline rules when flying your drone, then yes, drones can be dangerous. For instance, it takes a professional to use them in a city.”

Will we tackle city traffic with drones in the future?

For Erwan Grimaud, drones should not be just a pleasurable pastime. “Drones are really a key technological advancement,” he stresses. “For instance, they can help relieve congestion in cities.” By mid 2022, MC Clic is expected to unveil a drone taxi. “It’s very much as if you were taking a bus from one point of Monaco to another.” If the project succeeds, in a couple years it may well be possible for a two-seater drone to take you from Port Hercule to Fontvieille in just a few minutes.

It’s important to have vision for the future, without ever taking human beings out of the picture

“It is important to have vision for the future, without ever taking human beings out of the picture,” stresses the founder of MC Clic. “Because I know so much about with these technologies, I am also very much aware of their shortcomings.” Is the very survival of human beings at stake ? “Creating a kind of artificial intelligence capable of replacing us would be quite the achievement,” teases Grimaud, who reassures us that artificial intelligence outwitting humans pertains, for the time being, only to the realm of science fiction. “We are a far cry away from that point and if it ever does happen, I will be long gone! In any case, drones are not meant to replace us; rather they are intended to lighten our workload wherever possible.”

Deep in the bowels of his workshop, Erwan Grimaud proudly shows us his latest brainchild. A work in progress, its peculiar shape is somewhat unsettling. The spider-drone, he tells us, is built to rescue people. “It is capable of reaching people stranded in remote areas or under earthquake rubble.” Erwan Grimaud, ladies and gentlemen, or a modern-day hero.