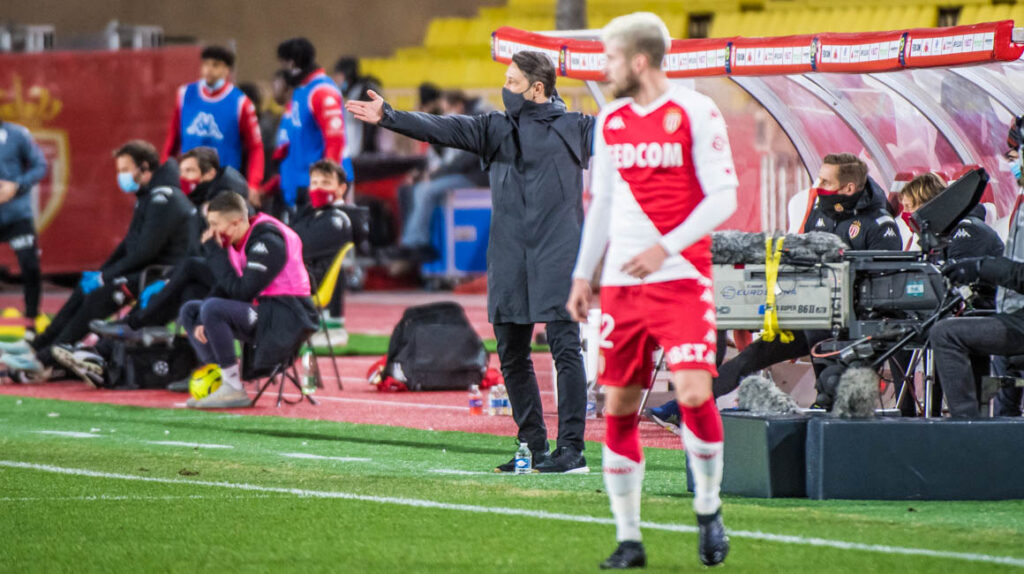 Seeing as Brest were predominantly focused on defending central areas in their organised block, AS Monaco found joy in exploiting wide areas with their flying wingbacks.

Using some interesting mechanics to make headway down the flanks, Caio Henrique on the left and Ruben Aguilar on the right benefited hugely from this approach throughout the 2-0 win.

Stretching the away side horizontally and vertically, their high and wide positioning added width and depth to attacks, as they offered an excellent outlet for switches of play. To generate the conditions to find them in such scenarios, Monaco would often initially direct their build up towards one side, which would subsequently force Brest to shift across. They’d then look to pass the ball back infield to a supporting central midfielder or central defender, who’d then immediately look for the booming diagonal switch to the far side.

From here, with help from the likes of Wissam Ben Yedder, Sofiane Diop and Kevin Volland pinning their markers centrally, the wingbacks could receive in oceans of space and in advantageous 1v1s to dribble upfield before supplying a cross or cutback.

Typically timing and directing their runs brilliantly, the duo notably embarked on some quality out-to-in runs into the area. These types of runs can be especially damaging due to how they exploit the blindside of opponents, who are facing the ball and are at a dynamic disadvantage over their ball facing, momentum gaining opponents.

Indeed, there were quite a few cases when the Frenchman and the Brazilian caused issues with these movements, with Aguilar’s run that helped earn the penalty that Wissam Ben Yedder missed a fine example.

Aside from marauding upfield on some wicked overlapping runs, it was good to see them execute slick rotations with their nearby attacking midfielders in Diop and Volland, which allowed them to underlap. Adding another dimension to attacks and creating dilemmas for markers on who to track, they were able to open up spaces to put extra strain on their adversaries.

In slower, more methodical build up play in the half space, the role of the wingbacks was very important too. Offering quality passing angles and options, they positioned themselves to support the ball holder or be able to receive underneath the pressure with third man movements. Regularly forming 4v3 or 3v2 overloads in diamond and triangular shapes, doing so enhanced their chances of breaking through Brest’s pressure.

The way they’d provoke the opposition fullback out to press them so the channel would open up for Diop and Volland to make darting runs into was another highlight.

Further upside could be extracted from their neat passing to either engage in neat combination play, recirculate possession while waiting for an option or fire in promising deliveries into the box.

An integral component towards the victory, Aguilar and Caio’s desire to get forward at every available opportunity, which often saw Monaco’s shape resemble a 3-2-5, continually asked questions of their foes while giving them so much offensive impetus.

By the numbers, the fact they combined to complete 14 touches inside the area, 10 successful dribbles, nine progressive runs, four accurate crosses, three shots and two shot assists demonstrated their impact.

Such an offensive force to be reckoned with, Monaco’s wingbacks yet again proved their class in this win over Brest, with Caio and Aguilar providing so much energy, intelligence and dynamism to Kovac’s team.

Now fully familiar with their roles in Monaco’s offensive 3-2-4-1 shape, expect them to continue their sparkling form, as the exciting, hard working wingbacks will be vital cogs in what looms as a captivating run home for the Les Rouge et Blanc.