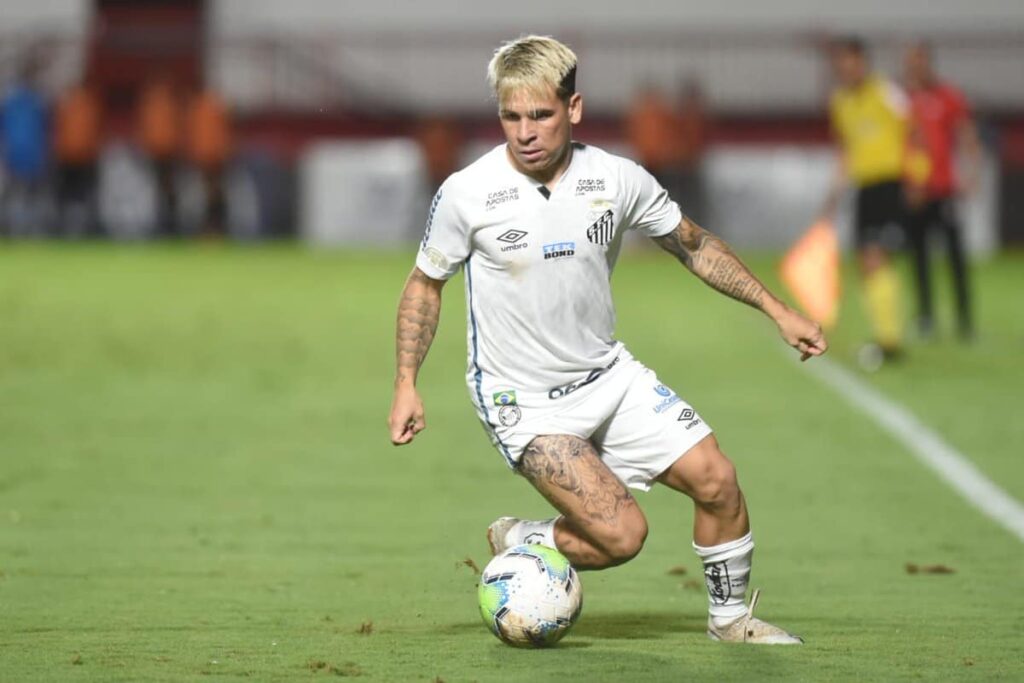 Having established himself as one of the most dangerous attackers not only in Brazil but in the whole of South America, Yeferson Soteldo’s justifiably attracted interest from a host of European teams.

Proving his class throughout the Brasileirao and during Santos’ memorable Copa Libertadores run, which sadly ended when they lost the final to Palmeiras, the Venezuelan has been a force to be reckoned with.

Such a fun player to watch who plays with swagger and confidence, he’s an unmistakable presence due to his bleached blonde hair, rolled down socks and diminutive yet stocky build. Usually deployed on the left wing at Santos, the Venezuelan international can notably play across the attacking line, including as a number 10, which ensures he offers his coaches tactical flexibility when deciding where best to play him.

Seeing as AS Monaco have been one of the clubs linked with him, he’d certainly be an interesting option for Niko Kovac. With Les Monegasques currently getting their width from their wingbacks in their 3-2-4-1 formation in possession, Soteldo would be used in one of the two central attacking midfield roles behind Wissam Ben Yedder if he were to join.

Ahead of what looms as a busy 2021/2022, as Monaco should qualify for Europe, he would add some vital depth and quality in these areas alongside Kevin Volland, Sofiane Diop, Aleksandr Golovin and Cesc Fabregas.

A masterful technician, who’s a joy to watch with the ball at his feet, he’s a real nightmare for defenders to handle. Possessing an exceptional first touch and Velcro like ball control, this, in combination with his low centre of gravity and incredible core and leg strength, provides him with a solid foundation from which to wreak havoc.

Balanced and adept at withstanding pressure, the 1.60 wizard is subsequently competent at weaving out of trouble with his blend of skill and strength. This serves him especially well when he drops deep with his back to goal, where he’ll usually be vigorously pressed from behind.

Another key to his effectiveness is how he performs frequent head scans so he knows what action to take. Knowing when to shield or protect the ball, turn away from the incoming pressure, roll his man or if he has time to instantly turn, this gives him the knowledge of where nearby opponents and vacant spaces are located.

In terms of beating his adversaries on the dribble, Soteldo certainly excels in this regard, for he has a crafty repertoire of moves to outfox his markers. These include Cruyff turns, stepovers, feints, shimmies, stop gos, drag backs and rapid changes of pace and direction.

The fact the fleet footed and quick thinking dynamo executes his skills at such a high speed and has a searing burst of acceleration ensures foes struggle to react quickly enough to stop him, even if they predict correctly what he’ll do.

As a result of his danger, he regularly draws multiple markers, which can vitally generate a free man, open a passing lane and generally unbalance the defending team’s defensive structure. Moreover, his prowess in this area has seen him importantly win free kicks in dangerous areas, plus gain separation from his man so he can fire shots on goal and find room to whip in crosses and cutbacks.

To continue on the theme of his technical qualities, and his creative and ambitious distribution sees him able to unlock defences and break lines effectively. Although he turns the ball over quite often due to him being overzealous at times, the positives far outweigh the negatives.

Astute at obliging runners in behind with precise through balls, striking incisive crosses, hitting penetrative passes into the feet of his fellow attackers, switching the play sharply and engaging in intricate combination play in close quarters, he has a pass to match just about any scenario. The latter deserves particular mention, as his lovely one touch passing and his array of back heels, dinks and flicked lay offs is extremely beneficial in breaking down deep sitting defences.

Meanwhile, his outstanding set piece taking ability is a huge asset too. Aside from striking some beautifully driven and curled corners and open play set pieces, he’s a massive threat when in shooting range, where he’s efficient at getting the ball up and over the wall to find the top corner.

While there’s room for improvement in his finishing, he’s proven he’s got the quality to score some classy goals, including stunning volleys, cool 1v1 finishes against the keeper and superbly placed curling finishes.

Bringing everything together with his movement, Soteldo intelligently finds space to help connect attacks and breathe life into them. Proficient at finding space centrally and in the half spaces, he drifts infield from his usual left wing station to offer himself as an option. In doing so, not only can he smartly find space between the lines to immediately threaten but also enjoy close connections to his attackers to combine with them or play them through.

It’s also been interesting to note how he frequently tucks infield and plays as an auxiliary centre forward when the ball is on the far side. This has ensured Santos can maintain a vital central option to occupy defenders and embark on cunning runs in behind. Surprisingly quick and excellent at timing these runs, once he sees an opening in between defenders, on the blindside of his man or if an opponent is preoccupied, he surges ahead.

Furthermore, how he uses stop gos, double movements and zig zags to break free of his man serves him well to exploit spaces behind defences and when attacking crosses into the box.

The way his indented positioning draws his man infield to manufacture space for his fullback and other attackers deserves mention too, which subsequently stretches the opposition rearguard while widening gaps between defenders that can be exploited.

Such an offensive weapon who can hurt opponents in a multiplicity of ways, his playmaking qualities, technical gifts and instinctive movement have made him a target of many in European football.

Citing Lionel Messi as one of his idols, the pint sized Soteldo gave an insight into his desire to keep proving his doubters wrong and how Messi helped give him the motivation to do so. “Everyone was talking about my height, that I was not going to be able to play football because of my size, because I was very small. Now I’m here, I got over it,” Soteldo explained to the official Copa Libertadores website.

“That’s for the young ones who are little too. They can see Soteldo and say, ‘I can too.’ I did that with Messi. I saw he was small, that he made it and I can too. I looked at him as another small guy and thought, ‘If he can become one of the best in the world, what’s to stop me making it?’ Besides, we had similar styles. I felt that, while maybe I wasn’t going to be the best, at least I could excel like him.”

Although Monaco already have some fantastic options in attacking areas, Soteldo would certainly give them something a little bit different in the final third. The fact he’d be available for a far cheaper transfer fee due to him playing in Brazil as opposed to in Europe makes the deal even more attractive.

Having worked under some intriguing coaches in recent times, such as Cuca, Ariel Holan and the iconic Jorge Sampaoli, who’s now at Marseille, he’d be well equipped to adapt to Kovac’s tactical demands.

Entering the prime of his career and with still vast room for development in his game, it’ll be a case of watch this space in the race to sign the outrageously gifted Soteldo, who appears destined to make the move to Europe sooner rather than later.