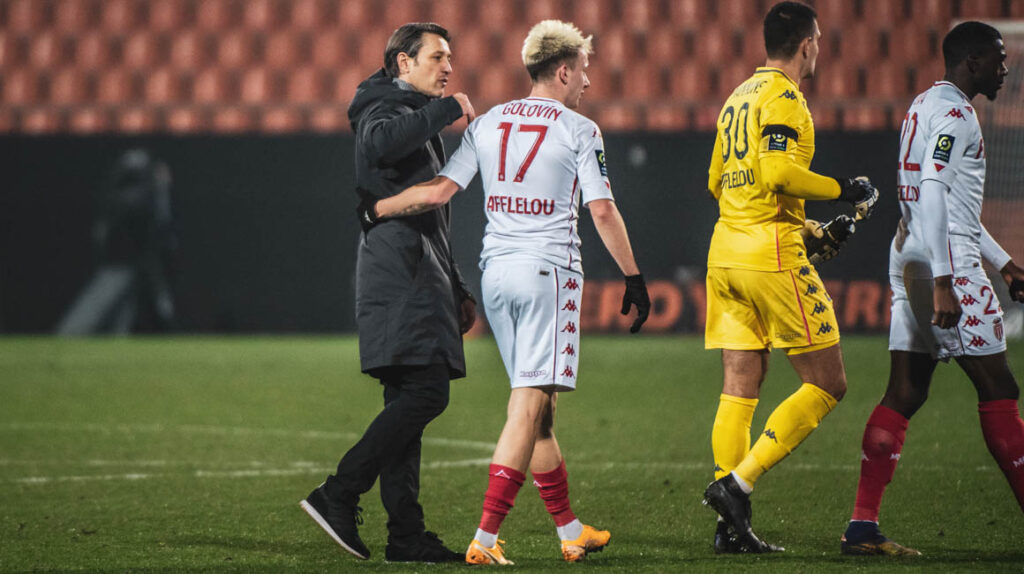 The benefits of having a fully fit and firing Aleksandr Golovin have certainly been apparent for AS Monaco in the last few months since he returned from injury in January.

Having suffered so many injury setbacks throughout his time with AS Monaco, one of which saw him miss over three months of this campaign, it’s been fantastic to see him stringing some matches together and finding form.

With the medical staff and Niko Kovac managing his minutes and workload brilliantly when he initially came back, this has paid off handsomely. Steadily integrated back into the team with game time off the bench while he got up to full speed, he made a major impact as a super sub by scoring against Lorient and supplying two assists vs. Marseille.

Kovac then handed him a start for the Nimes game, and the Russian star vindicated his decision by bagging a sensational hat trick and giving an assist, in what was a stirring man of the match showing.

Further assists have been produced against Brest (two), Saint-Etienne and Dijon, which have accentuated his quality.

His performance in Monaco’s most recent win against Dijon was full of quality and encapsulated what an asset he is to Kovac’s team.

Starting the match as one of Monaco’s two number 10s in their 3-2-4-1 (in possession), Golovin’s excellent movement and understanding with his teammates was crucial towards him wreaking havoc. So good at receiving between the lines while avoiding markers, this enabled him to receive possession in these dangerous central areas to cause problems for the Dijon backline.

On top of the above, it was positive to see how he exploited the channels when the opposition fullback pressed out, how he surged in behind, dropped into central midfield and rotated with his nearby wingback and attackers.

The way he strategically pinned and drew markers to open passing lanes so teammates could be found ahead was another positive. Doing so on countless occasions, his awareness and reading of the play certainly helped give the ball holder a progressive option while generating space for teammates to receive.

Moving to essentially operate as a right winger/wingback for the second half when Monaco had possession, a position he’s becoming familiar with, Golovin looked the goods here too. Adding width and depth to attacks while stretching opponents horizontally and vertically, his forward runs were a highlight.

He’d notably mix things up by interchanging with his nearby attacking midfielder in Cesc Fabregas, thus allowing him to receive infield to combine with his the attackers in close proximity or burst into the box with gusto.

In addition, from this post, he could be isolated 1v1 with his direct opponent and maraud into the box while exploiting the blindside of markers to attack deliveries from the opposite flank.

Meanwhile, on the ball, his class was evident throughout, with his technical wizardry bearing fruit on many occasions. Boasting elite ball control and a feather like first touch, this served as a fine platform from which to execute his actions coherently.

So good on the dribble, he avoided pressure superbly by twisting and turning out of danger by using his awareness and ultra sharp ball handling. Then, when it came to outfoxing adversaries, his array of maneuvers, including feints, stepovers, shimmies, drag backs and smart alterations in speed and direction allowed him to beat his man or gain vital separation.

His ball mastery effectively drew multiple markers, which would open passing lanes and unsettle the Dijon defensive setup to allow a free man to open up further ahead.

Full of ingenuity in his passing as well, the 24-year-old was excellent at creating chances and opening up the opposition. His through balls were certainly the key, for his vision, ability to weight his passes and accuracy shone throughout. On top of supplying Wissam Ben Yedder with a crafty assist for Monaco’s second, his incisive pass to oblige Ben Yedder’s run was the catalyst for the Monaco captain to win a penalty.

Further upside could be extracted from how he combined intricately in tight spaces by playing some sharp one touch passes and flicks, plus from how efficiently he switched the angle of attacks, crossed the ball incisively, struck some deadly set pieces and recycled possession if no progressive options were present.

Kovac would’ve been absolutely delighted with his ever improving defensive output too. Pressing aggressively and showing fantastic intent to regain the ball with his counterpressing after Monaco lost possession, he won back possession on multiple instances. The most notable case was when his fierce harrying enabled him to nip in to recover possession before he played in Ben Yedder to score.

A real game changer who’s capable of producing moments of magic very few in world football can achieve, it’s such a bonus for Monaco having him fully fit and firing.

Now the challenge will be keeping him healthy so he can continue to prove what a class act he is on his path to fulfilling his enormous potential.