Romain Goiran, a man mastering the art of bouncing back 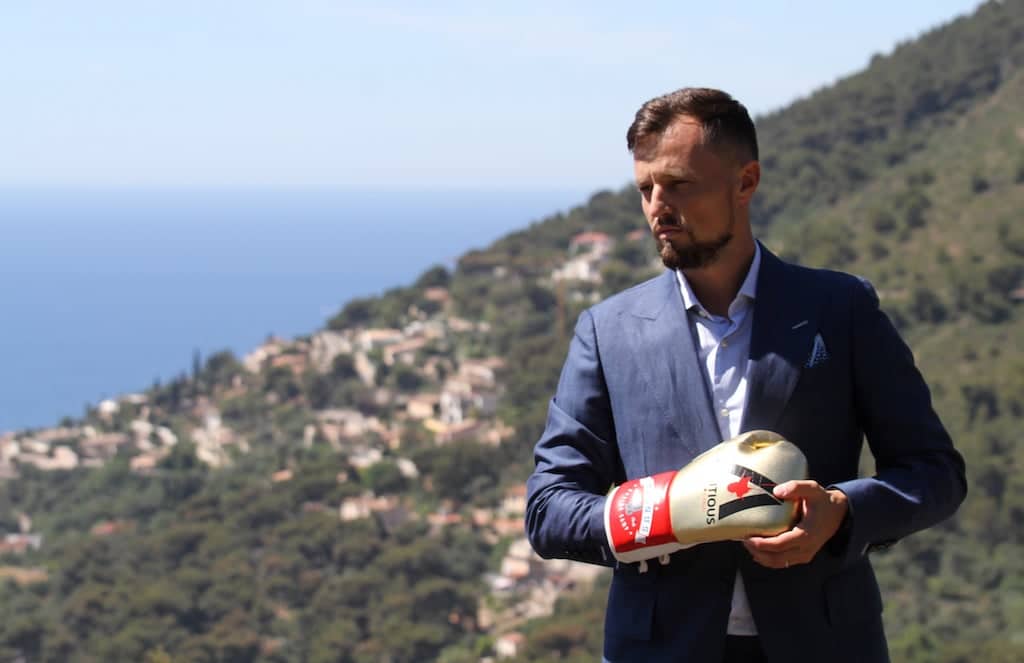 A familiar face in the Principality, coming from a family who settled in Monaco almost 200 years ago, Romain Goiran works closely with Louis Ducruet and is the father of a young son. At 33, he has already lived many lives, but this football and martial arts enthusiast is now trying his hand at promoting boxing.

His phone never stopped buzzing. After an hour spent chatting, notifications flooded his home screen. Romain Goiran leads a busy life, and for him, every minute counts. Since time is of the essence, after 60 minutes opening up to us, he had to get straight back to work and catch up.

“I learnt how to be rigourous. That’s what saves you when you’re lacking in motivation,” he says. “Do nothing? That’s not something I’m used to. I just can’t. Even on holiday, I can’t seem to manage it.”

A passion for doing deals

Since being a young boy, waking up at 6am and getting back home for 10pm is all this 33-year-old entrepreneur has ever known. Believe it or not, it was not the birth of his son that altered his work schedule. “It’s crazy just how much you can do, when you simply have no other choice. It’s all about organisation”.

And sacrifices too. In order to make his own dreams come true, refusing to be the side character in other people’s stories, Romain Goiran put his private life to one side. A compromise he does not regret. “Barbecues with friends, football games, it’s fun. Sometimes I miss all that. Success comes at a cost.”

I started doing business in my parents’ garage. I used to buy scooters and other items, then I would sell them.

Born in Monaco, a happy child, who went on to study at Charles III high school, the life of this boxing and football enthusiast first properly changed at age 15. “The school was not supportive. My interests changed.They pushed me to go to the Lycée Technique et Hôtelier de Monaco. But I wasn’t meant for that.”

Taking a knock and coming back stronger

“I started doing business in my parents’ garage. I used to buy scooters and other items, then I would sell them. I wanted my own pocket money. Me and my friends loved doing swops. It was our little game. We’d negociate, swap our things and have a right laugh.”

>> READ ALSO: Gildo Pastor, a man in love with motorsport

Barely 18, the youngster left college and tried his hand at lots of odd jobs. First a delivery man, then a bartender, before working as a guard at the Monte-Carlo Casino. “I had to spot the people who were underage. I looked about 14. People often asked if I was old enough myself,” he says, smiling. “But I quickly became a valet. I served guests. It was a great time. I met some incredible people and really enjoyed the nightlife.”

I didn’t necessarily have a good eye, but I knew how to spot interesting players.

Not long after, his father, who had just set up his own players’ agency, asked him to join him. Putting the night shifts behind him, he moved on to new horizons. “I was doing secretarial work. But I quickly began scouting out players. I didn’t necessarily have a good eye, but I knew how to spot interesting players.” Then the day finally came for him to sign his first player in an English club. “I dressed well so people would take me more seriously.” Since that day, nobody saw him in his suit ever again.

From football to fashion

Whilst his career slowly began to take off, Romain Goiran continued to network, crossing paths with one particularly significant individual: Jean-Marie de Saint Ange, founder of the fashion house Saint Ange. In Monaco, this resourceful youngster found an empty gallery. Bingo. The brand could now set up in the Principality and Romain became their manager. “Until the day I ran out of stock, I had to sell extra-large clothes to guys who took a size small.”

Thinking back on the memory makes him smile. However, at the time, he had an expensive rent to pay. Fortunately, he was still making money from being a sports agent. Added to this was the money he earned after winning the “Prix de la Jeune Chambre Économique” in 2015 with his invention Youdome: a big, dome-shaped scanner capable of measuring all parts of the human body. So clever was his invention, it caught both AS Monaco and the Monte-Carlo ballet’s attention.

One day I came back to our offices, and everything was gone.

“Everyone playing for AS Monaco used the device,” he says. “We’d just won the young enterprise award. We’d signed our first partnerships, but…the past is in the past, I don’t have time to dwell on it. In life, you have to move forwards all the time.” Despite not focusing too much on the past, he has been unable to forget this moment.

“One day I came back to our offices, and everything was gone.” His business partner at the time, who he wasted no breath naming, had betrayed him. Left with no job and no money, the Monégasque refused to give up. After a short break working at the l’école des Révoires in Monaco, the co-founder of Youdome returned to the world of business. He would make his comeback with Ambitious Monte-Carlo, specialising in sport management.

>> READ ALSO: “Drones often get a bad rep”: how Erwan Grimaud is flying Monaco to the future

Then, the opportunity to reunite with the man who gave him his first boxing lessons, at just eight years old, came along. The man in question? Jean-Marc Toesca, former Palace Guard and well-known boxing coach. “We started with Tiémoué Bakayoko. His brother wanted me to look after him. To do well in the ring, a player has to be mentally strong.”

Florentino Luis and Gelson Martins came to train with us several times.

Between boxing, yoga and qi gong, the French international is back at the top of his game, returning to his former glory. Players for AS Monaco are knocking on his door. However, the health crisis has forced Ambitious Monte-Carlo to find a new home. Now, the company is based in Beausoleil, on a tennis court in Romain’s father’s second home.

In this giant tent are a boxing ring, belts, and an autographed Florentino Luis shirt. “They came with Gelson Martins several times this season.” Whilst working as a private consultant for Louis Ducruet, Romain Goiran is taking on the challenge of bringing boxing back to life.

“We bumped into each other at an event, but we already knew of each other. I told him to come and train at 39 Monte-Carlo. Now, we’ve been working together for a year and a half.” Hired to manage the interests of Princess Stephanie of Monaco’s son, Romain Goiran is also about to experience his first event in his new role as a promoter.

With “Chill Out On The Bay”, a boxing gala organised on a private beach in Calvi (Corsica), initially planned for last December on the terraces of the Monaco Yacht Club, this Monégasque promoter is taking his first step on a brand new path. “I don’t know where all this is going to lead me.”