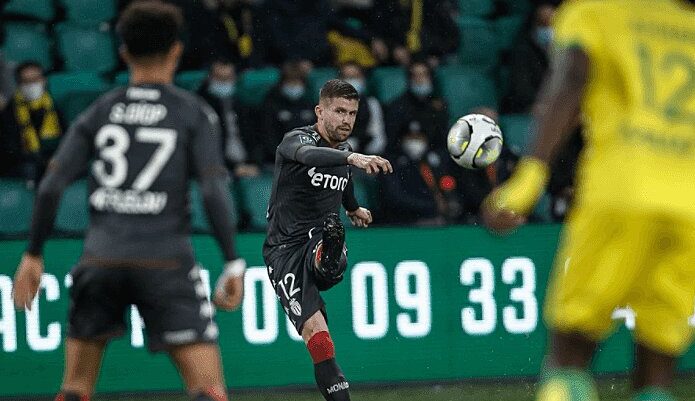 With AS Monaco missing many key attacking players for their match with Nantes such as Aleksandr Golovin, Wissam Ben Yedder, Jean Lucas and Krepin Diatta, new manager Philippe Clement opted to deploy Caio Henrique as his number 10.

Despite being in unfamiliar confines away from his usual berth as a left wing back or full back, the Brazilian adjusted smoothly to his new role. Vindicating his manager’s faith through his strong body of work, Clement was full of praise for the former Atletico Madrid man when speaking after the match. “In the absence of a few attackers, we had to be creative,” Clement explained.

“Jean Lucas had only had two leg workouts since his return, so I tried to put Caio in a position that is not necessarily usual for him. I think he did a very good job for the team in this role. We will see in the coming weeks what solutions are available to us in the sector, but I found it very interesting between the lines. I had spoken with him about it before the game, and he told me that he had already played in this position when he was younger.”

Transferring his attributes over nicely to his attacking midfield role, he looked very comfortable indeed operating in these more heavily populated areas of the pitch. The fact he’s composed on the ball, reads the play well, moves so intelligently and has a tidy first touch and ball control were certainly vital towards his success.

While he combined intricately in close quarters with neat combination play, slid some crisp through balls in behind, struck some enticing set pieces and carried the ball with intent, there was no doubting his movement was the highlight of his performance.

Aware of where his opponents, teammates and vacant spaces were, his scanning of his surroundings, in combination with his relentless work rate, saw him constantly find space to operate in. Forever causing dilemmas for his adversaries due to him always altering his position, defenders struggled to settle into a rhythm of how best to stop him.

Whether dropping deep into midfield to connect play, exploiting space between Nantes’ defensive and midfield lines, pushing wide or into the half spaces or bursting in behind, he continually posed a threat.

It was important to note when he checked towards the ball or pushed wider that he formed vital 3v2 overloads to ensure his team could progress upfield smoothly. Supplying his colleagues with a vital option while affording himself time once receiving, the benefits of his movement here were key collectively and individually.

Moreover, how he remained awake to the likes of Gelson Martins or Sofiane Diop drawing their opponents out of shape so he could angle runs down the newly vacated channels was encouraging. In addition, it must also be said his partnership with Kevin Volland, who was operating at centre forward, was full of upside, for they dovetailed superbly to conjure openings for one another.

The most prominent examples of their relationship came through shrewd opposite movements, where one would drop deep and the other would run in behind, and how they’d pin markers so either man could exploit gaps to run into depth or freely receive between the lines. The way they subtly rotated positions was valuable too, which further complicated things for their foes.

The interchanges Henrique executed with his wingers were notable too, for they generated indecision for their markers and disorganised the Nantes backline while allowing them to use their attributes in differing areas.

Rapid to pick up on and pounce when he saw gaps to run in behind, this aspect of his output gave Monaco an additional threat. Often positioned on the shoulder of the last man, his smart acceleration and run timing ensured he posed much danger to give his teammates a viable option in behind. Stretching the Nantes backline and adept at gaining separation, the graphic below demonstrate his aptitude here, which was a pleasant surprise.

Persistently buzzing around and finding pockets of space all over the attacking third, Clement deserves credit for trying out Henrique in this unique role. Adapting so well to the task at hand, the Brazilian’s efforts warrant plenty of praise as well, for he transferred his skills wonderfully into the number 10 slot.

Whether or not we see him in this post again remains to be seen, but nonetheless he certainly proved to Clement he can fill in to help his team if need be. And in the process showcased what a complete and intelligent footballer he is.