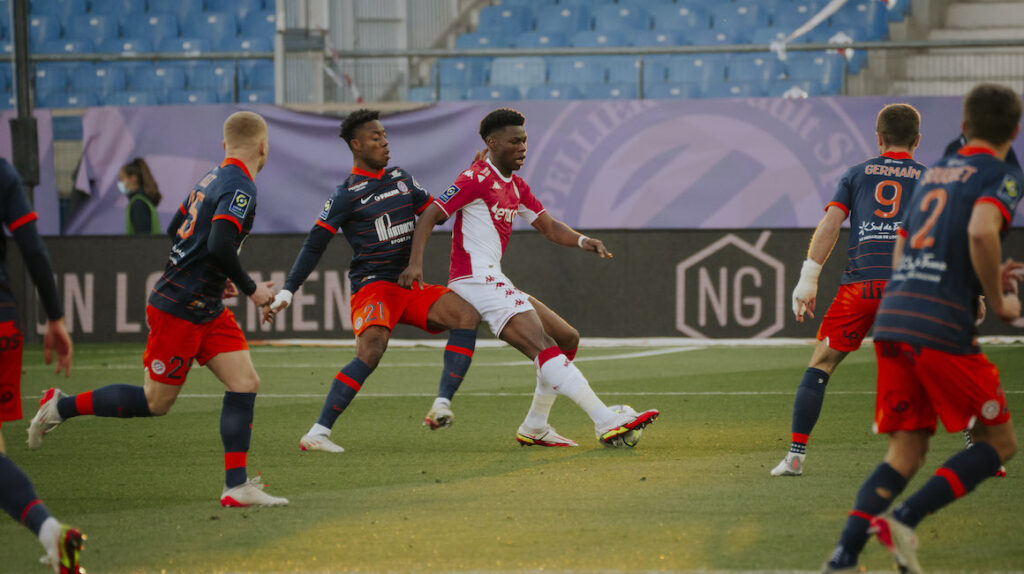 Despite AS Monaco falling to Montpellier 3-2, Aurelien Tchouameni delivered yet another masterclass to further outline why he’s regarded as one of the elite central midfielders in Europe.

Stationed at the base of Philippe Clement’s midfield, the French international shone brightly on both sides of the ball, with his energy, reading of the play, tactical intelligence and technical skills proving key.

Getting through a power of work defensively, there was much to admire about his output in this phase. By anticipating what was about to unfold and being aware of his surroundings, this allowed him to cut out attacks, chime in with interventions, pick up loose balls and support his colleagues.

So physical and athletic, the way Tchouameni covered a huge amount of ground and was strong in his duels were further keys to his success. His tracking back was especially important, for he’d frequently race back to fill in at centre back when Axel Disasi or Guillermo Maripan followed their marker deep or wide. The below graphic illustrates this aptly, where he gives Monaco structural stability as Maripan is drawn out.

His tireless efforts were also evident in his pressing. Showing fine judgement and decision making, he’d pick his moments when to press a ball-near Montpellier midfielder if they were in position to get involved or if he needed to drop back and support his backline by being the extra man to help regain second balls or win headers.

To focus on his aerial prowess, he excelled in this area too, with his leap, capacity to quickly pick up the ball’s flight, bravery and balance crucial towards him winning the majority of his duels. Not only was his work here vital in winning second balls, it also helped Monaco deal with set pieces on both ends, crosses into the area and prevent dangerous flick ons from happening.

By the numbers defensively, his 16 ball recoveries, six interceptions, four won headers and the fact he won seven of his nine defensive duels punctuated his stopping worth.

Meanwhile, his output on the offensive end was of a similarly high standard. Controlling and dictating plenty of Monaco’s possession phases from his deep sitting role, the 21-year-old’s passing and movement ensured he played an integral role in helping his team progress up the pitch.

Altering if he dropped deep between or alongside his central defenders, plus just beyond them, behind Montpellier’s first line of pressure, his varied positioning allowed him to get on the ball with time and space. Forming key 4v2 or 3v2 overloads in build up, these greatly enhanced Les Monegasques’ attempts to bypass the press while letting him breathe life into attacks.

Tchouameni’s movement saw him offer assistance for Monaco’s wide attacks as well, with him giving them a plus one to achieve numerical and positional superiority to recycle possession infield, switch the angle of attacks or embark on one of his driving dribbles.

Keeping things ticking over with his passing over short, medium and longer distances, he showed how smartly he could connect passages, move defences or create promising situations with through balls and line breaking passes.

His wonderful assist was a prime example of his passing qualities, which saw him whip in a perfectly weighted chip to oblige Wissam Ben Yedder’s run so he could head home Monaco’s opener.

Offering a threat with his ball carrying and strategically timed forward runs to get into shooting range or in areas to thread imaginative passes too, this added to his menace.

Completing 76 of his 83 attempted passes and accurate with 14 of his 16 passes into the final third, this, in combination with his four dribbles, three shot assists and two shots, illustrated his danger.

Praised by his manager after the match and named in L’Equipe’s team of the week, it was positive to see him receive recognition for his multifaceted performance.

Acting as an organiser, creator and a destroyer depending on the phase of the game, Tchouameni once again showed off why he’s such a complete midfielder. All that was missing was Monaco getting the victory to cap off a superb night’s work from the gifted Tchouameni.