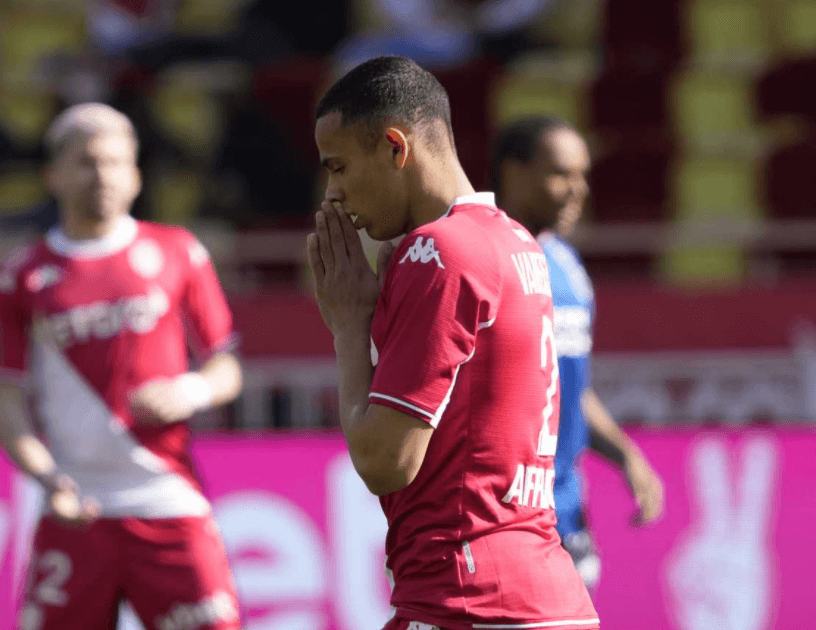 Vanderson continued his promising start to life with AS Monaco by putting in his best performance yet against Lorient on Sunday.

Having impressed in cameos off the bench, most notably against Montpellier, where he scored a spectacular volley, Philippe Clement handed him his first start against Lorient. And the man who joined in January from Gremio didn’t disappoint, producing an excellent showing from his right wing post.

Unquestionably one of Les Monegasques’ most dangerous players, the Brazilian starlet, who made his name at fullback, caused plenty of problems for the Lorient backline.

To start with, his progressive passing was a source of offensive impetus for the home side, with him sliding some measured through balls in behind to his fellow attackers and nearby fullback in Djibril Sidibe. The graphics below indicate his prowess here, with the first seeing him draw three opponents before pinpointing Sidibe and the second seeing him oblige Wissam Ben Yedder’s run after expertly finding space.

The way he combined neatly with his teammates in close quarters was positive as well, for his quick exchanges helped to unbalance the Lorient backline to create some useful openings.

Vanderson’s incisive movement was undoubtedly the standout aspect of his time afield, however, with this ensuring he occupied dangerous positions both to help him individually and the team collectively.

While he was named on Clement’s team sheet as a winger, he played most of the match in more central areas either in the half spaces or in zone 14 between the lines of the opposition’s midfield and defence.

There were many advantages in doing so, with his indented positioning pinning his man to create acres of space for Sidibe to overlap into for starters. This ensured Sidibe could stretch Lorient’s backline and fire in deliveries from wide while allowing Vanderson to be an option to support his teammate or run into the box.

Picking his moments when to drop towards the ball, his ability to receive between the lines was key in luring out defenders, allowing him time to execute his actions and ensuring he could combine with his attackers in close proximity to quickly shift their foes’ shape.

The presence of Jean Lucas (alongside Vanderson and Sidibe) in wider areas and the half spaces was also important towards destabilising their adversaries and forming 3v2 overloads. Effectively pushing into these zones from central midfield, Lucas assisted Monaco to progress smoothly into the final third by giving them numerical and positional superiority.

Vanderson’s nuisance was amplified further by his damaging bursts into the box. Showing good timing and awareness, he was especially good when attacking crosses when the ball was on the opposite flank. Using his dynamic advantage over his more stationary trackers who found it difficult to monitor his blindside runs, his fourth minute chance arose due to the aforementioned.

By the numbers offensively, his six touches inside the box, five accurate passes into the final third, two shots and one shot assist depicted his strong output.

Full of energy on the defensive end too, he pressed and counterpressed effectively to stifle many Lorient passages or stop them from developing into something dangerous.

Although not forced into a huge amount of stopping work due to Monaco dominating possession, he still deserved credit for his application when called into action, which was demonstrated by the fact he won all five of his defensive duels, made three interceptions and triumphed in three aerial battles.

After another encouraging effort by the gifted youngster, he once again showcased what a shrewd signing he is. Clearly adapting nicely to life on the French Riviera, his recent comments on his move and assimilation underline the importance of having some familiarity when undertaking such a big switch. “I know people who went through Ligue 1 and who spoke to me well about this championship. I was not in direct contact with Caio Henrique and Jean Lucas before my arrival here, but they have been a great help since my arrival, for my adaptation and on a daily basis with the group,” he said.

Rated extremely highly by sporting director, Paul Mitchell, his words on the player upon his arrival certainly ring true following his swift start. “Vanderson is a modern player, an attacking fullback who likes to project himself forward,” Mitchell explained.

“He already has a great experience with more than 50 professional matches in the Brazilian championship and was very coveted in the Premier League as in Serie A. We are sure that he will have a future in the Brazilian selection and are therefore very happy to welcome him. This is a very big potential for the future. I think we have to give him time to adapt to our championship. But I think it can have a real impact in the very near future.”

Already staking his claim for a starting berth just seven appearances into his Monaco career, all the signs are there he’ll cement his place sooner rather than later.

Growing with every passing week and being managed perfectly by the club, the coveted Brazilian will definitely feel he made the right choice in joining Monaco in January, for everything has gone to plan so far.