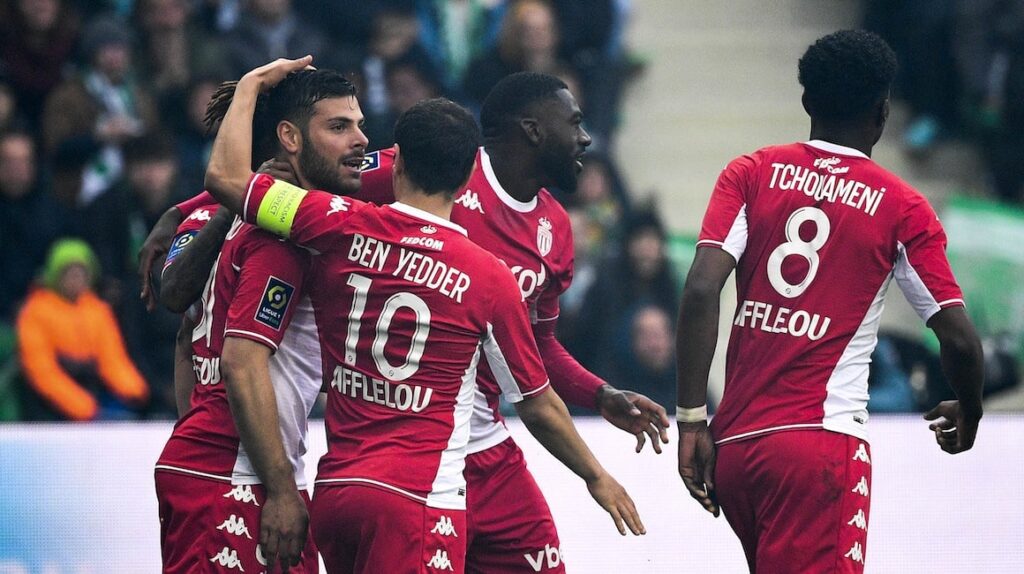 AS Monaco backed up their outstanding win over OGC Nice in the derby by recording a crushing 4-1 victory vs. Saint-Etienne.

Picking almost the same starting lineup for the third consecutive match except for Gelson Martins replacing Ruben Aguilar, Philippe Clement’s decision to opt for continuity paid off yet again, as Monaco opened the scoring in the 23rd minute after a wonderful move that Wissam Ben Yedder capped off with a classy finish.

Les Monegasques then instantly doubled their lead when Kevin Volland scored just two minutes later to stamp their authority on the clash. Despite their dominance, Wahbi Khazri halved the deficit when he punched home his penalty that arose after an unfortunate Aurelien Tchouameni challenge just before the interval.

Coming out for the second half eager to keep imposing themselves on Les Verts, Monaco were rewarded for their intent, albeit with an element of fortune, when Timothee Kolodziejczak diverted Ismail Jakobs’ cross into his own net.

Although an untimely interruption occurred when a section of the home crowd let off some fireworks into the sky, Monaco remained unfazed even though play had to be paused for 30 minutes. Settling back into their groove swiftly, Monaco made it 4-1 in the 77th minute, with Myron Boadu next to get his name on the scoresheet when he latched onto Jakobs’ precise delivery.

Flexing their muscles and asserting their dominance, there was no doubting Monaco deserved all three points, in a match where they emphatically outplayed their adversaries.

“We started the game well, with two chances in the first three minutes, then two goals before half time. Unfortunately we conceded a goal from the penalty spot, but we managed to score the third, which was very important. Then there was a break and it’s always difficult for the leading team, because they have to stay focused and come back into the game with a lot of energy. I’m very happy with my players because they handled it well and I’m very happy to have scored four goals, although we could have scored even more,” Clement explained.

He then added this on Monaco’s frontline, who are firing on all cylinders at present, stating: “I will even speak of a trio, because Myron Boadu scored again. Kevin has progressed a lot physically, he no longer has pain and is back to his best level. He works very hard for the team, provides assists and scores goals. He is always positive and plays for the team which benefits the players around him.

“Wissam has been very important to us over the last few months with his many goals and his contribution to the game. Myron is becoming more and more the player I want to see. He’s still a young player, who needs to work, but he has the qualities to score a lot of goals. This competition is very beneficial and my players must remain very focused for the four finals that we have left to play.”

Moreover, to further illustrate what a force to be reckoned with they’ve been during their swashbuckling six game run, they’ve scored 15 goals while only conceding five. Very impressive indeed upon considering they’ve faced the likes of Paris Saint-Germain, Nice and Rennes in this stretch.

Angers on the horizon

Moving into outright third in the standings following this latest triumph, the final Champions League qualification spot is now well and truly within reach.

Next up for Monaco is a tough matchup with Angers at the Stade Louis II, where they’ll be desperate to extend their remarkable winning streak to seven.