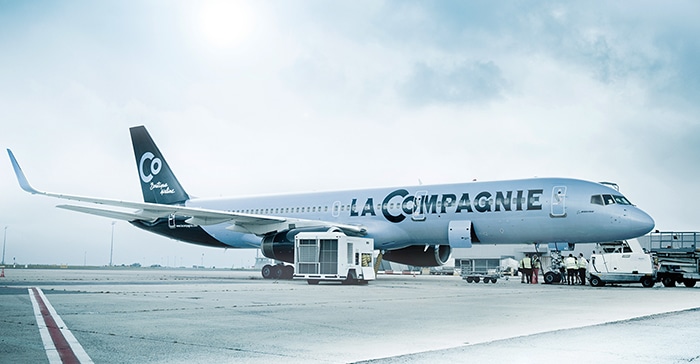 French airline La Compagnie recently announced that they will provide a new summer New York-Nice route for $1,200 per roundtrip business class ticket. Flights will begin in May.

La Compagnie is a relatively young French airline (founded in 2013) that offers an all-business class cabin on all of its flights. For the moment, the airline serves only the Paris-New York route. The brand new trans-Atlantic New York-to-Nice route will begin service on May 6, 2019, and feature the same high-level service that La Compagnie is known for.

The East Coast-to-French-Riviera connection will fly five times a week between May and October on the airline’s brand new pair of fuel-efficient Airbus A321neos (operational in April 2019). Pushing the bar ever higher, flyers can enjoy complementary noise-canceling headphones, personal use iPad Pros, in-flight WiFi, Caudalie dopp kits, seats that convert to flat-lying beds and a two-course meal. The meal is curated by Michelin-starred chef Christophe Langrée. Each flight will carry between 74 and 76 passengers depending on the aircraft.

Business class at a better price-point

Far from being a low-cost airline (La Compagnie’s NYC-Paris roundtrip costs between $1,200 and $1,500 or 1 060€ to 1 325€), the service is a novel proposition that is certainly less expensive than equivalent business class offerings. By less expensive, we mean thousands of dollars less expensive… Finding an option beneath $2,000 is a feat in its own right. Though the $1,200 round-trip rate only goes to the first 1,000 La Compagnie travelers, the flight will jump to a very competitive $1,500 for subsequent travelers.

La Compagnie issued this statement in reference to choosing Nice as their newest destination: “The airport has significant premium traffic from and to the United States.” The choice became “obvious” for La Compagnie, which seeks to give its travelers access to “an alternative offer of a 100% business class plane at the best price. On the ground in Nice, they will enjoy, as they do in Newark, access to Business Class lounges and fast check-in to facilitate their boarding and travel experience.”