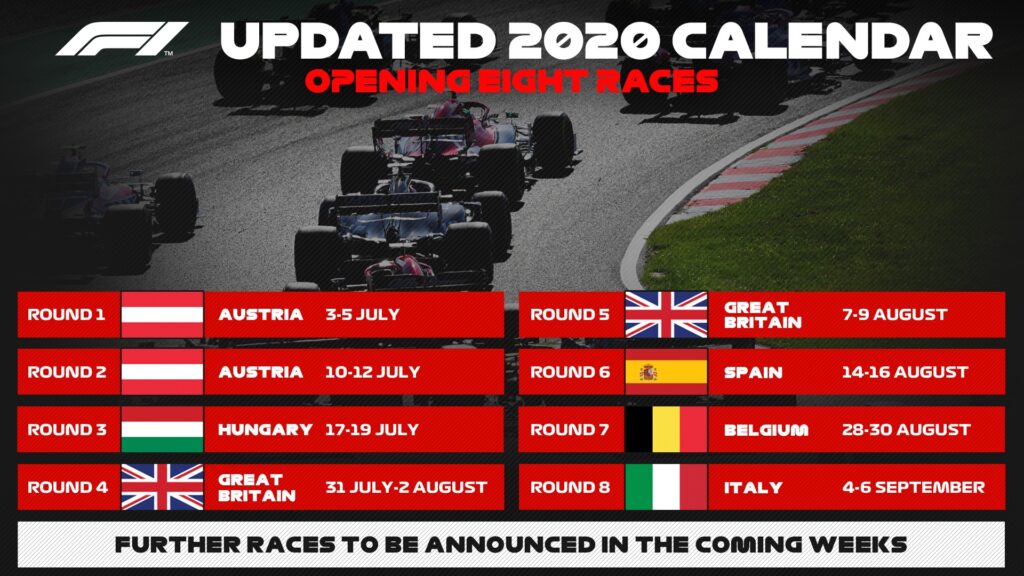 After several weeks of uncertainty, the International Automobile Federation (FIA) has announced the dates for the first eight races of the 2020 season. They will take place in Europe from July to September.

Formula 1 just received the green light. The first eight meetings, exclusively European, were announced on June 2nd by the FIA. Due to the cancellation of GPs in Australia, Monaco (which will return next year), the Netherlands and France, two circuits will now host several races: Spielberg in Austria and Silverstone in Great Britain.

The world championship will, therefore, start on July 5th in Austria on the Spielberg circuit, which will host a second race on July 12th. The drivers will then travel to Hungary on July 19th, Great Britain on August 2nd and 9th, Spain on August 16th, Belgium on August 30th and Italy on September 6th. For health reasons, these races will take place without spectators.

The following dates will be announced in the coming weeks, “due to the current international evolution of the COVID-19 situation,” specified the FIA. The organisation hopes to be able to organise a total of 15 to 18 races. In other good news, the F2 and F3 will also return in July.

I welcome the restart of @FIA @F1 World Championship. Unprecedented #COVID19 crisis, unprecedented actions to resume the championship in the best possible conditions: congratulations to everyone who made this happen. Looking forward to the 1st race in Austria. I will be there! https://t.co/GzsrckRzcW

The FIA is the governing body of world motorsport and the federation of the world’s leading motorsport organisations. Founded in 1904, the FIA, with its headquarters in Paris, is a non-profit association, bringing together 240 national automobile and sports organisations from 144 countries on five continents. Its member clubs represent millions of motorists and their families.