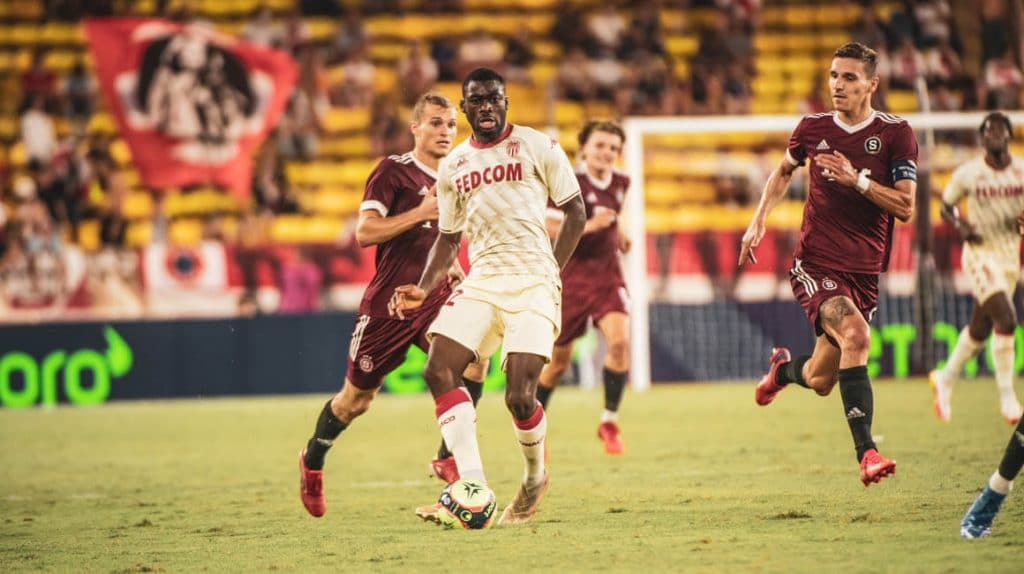 Youssouf Fofana was certainly one of AS Monaco’s standout performers during their pulsating 2-2 derby draw with OGC Nice.

Operating in his usual central midfield station alongside Aurelien Tchouameni, the 22-year-old produced an accomplished showing on both sides of the ball.

Up against Christophe Galtier’s high flying Nice team, who have begun the season in fine style, Fofana held his own to limit the effectiveness of their rivals. Engaging in an intriguing midfield battle with Nice’s midfield duo of Mario Lemina and Pablo Rosario, he was arguably the standout operator in this zone of the pitch.

Imposing himself defensively, the former Strasbourg starlet demonstrated sound judgement and good decision making to undertake his actions successfully. Doing an efficient job of both controlling space and picking up markers when they ventured into his designated area of operation, Fofana’s positioning and awareness helped him immensely.

In addition, how he shrewdly situated himself to block passing lanes into the likes of Calvin Stengs, Amine Gouiri or Hichem Boudaoui was notable and helped protect the centre of the pitch.

Timing and angling his pressure well, he picked his moments to pounce when certain cues arose such as an opponent receiving with their back to goal or in an open body posture, plus when a sloppy or underhit pass was on its way.

Forceful and strong in his duels, opponents found him a tough man to overcome due to his size and languid frame. Using his arms and long legs to both unbalance trackers or nip in to regain possession, Fofana’s ball winning capabilities were so valuable for his team.

Chiming in with nine won duels, seven ball recoveries and two interceptions, Fofana’s stopping output was at a high level.

Flexing his muscles offensively too within Niko Kovac’s customary 3-2-4-1 attacking shape, Fofana was a regular threat. Finding space smartly to get free of trackers, he did a neat job of receiving possession behind the back shoulder of opponents so he could immediately turn and drive upfield. As can be seen in the image below, it’s important to note how he receives the ball between two foes, before marauding into the vacated space he knew was there as a result of his scanning.

Typically venturing higher than his midfield partner, Fofana took up some promising areas between the lines and in the final third. Directing his damaging forward runs wisely, the speedly, long striding Frechman posed a key option for teammates to use in and around the box.

Indeed, his intelligent positioning was actually the catalyst for Monaco’s opener, where he coolly inherited position high up, turned his man and fired a slick pass to Wissam Ben Yedder to put the wheels in motion for Aleksandr Golovin’s goal.

Also supporting build up, pinning and drawing adversaries to open pass lanes into his forwards, swapping sides with Tchouameni and staggering his position to cause opponents dilemmas on who to monitor him, Fofana’s spatial awareness and understanding was a major positive.

Once on the ball, Fofana’s ability to break the lines with his passing was vital in breathing life into attacks as well. Striking some measured balls to bypass one or more opponents and engaging in some crisp exchanges in close quarters, his forwards could then get on the ball in favourable locations to wreak havoc.

Moreover, by hitting the odd piercing through ball, switching play sharply and recycling possession competently added to his worth.

By the numbers in an attacking sense, the fact he completed three dribbles, made 30 of his 38 passes, struck four accurate passes into the final third and was fouled five times punctuated his polished effort.

Yet again proving why he’s one of the brightest young central midfielders in Ligue 1, the ever-improving Fofana vindicated his manager’s decision to start him for this colossal clash. Having dropped down the pecking order and fallen slightly out of favour at the beginning of the season, Fofana deserves tremendous credit for knuckling down and regaining his spot in Kovac’s plans.

Possessing an excellent attitude and always eager to hone his craft, it was fantastic to see Fofana, who often gets overshadowed by Tchouameni, stand up and be counted on the big stage.