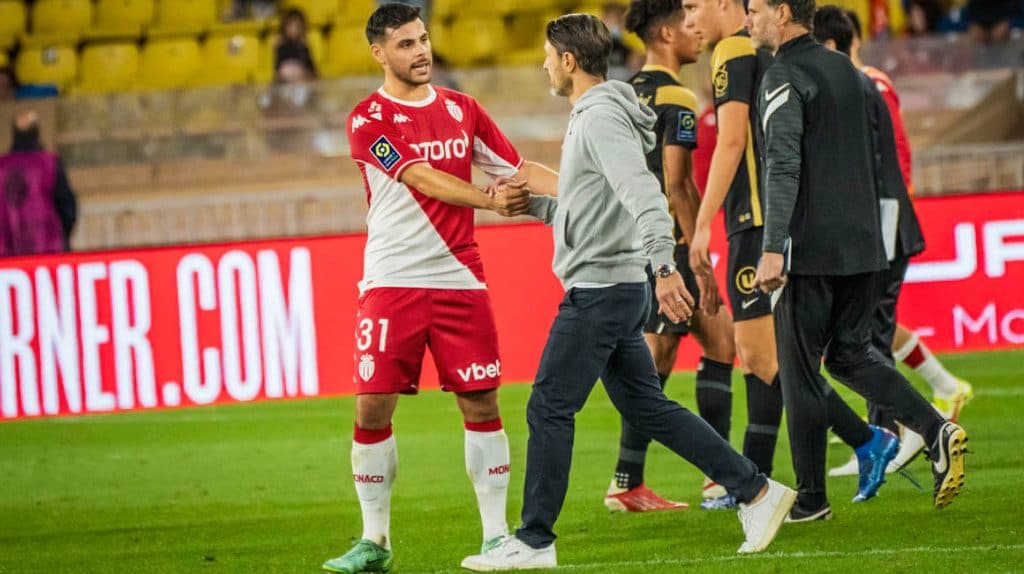 Fully firing and back to his best, Kevin Volland’s masterclass was instrumental in AS Monaco’s crushing 3-1 triumph over Montpellier.

Having not looked at his sharpest and down on confidence so far this season, this was a timely and brilliant return to form by the German.  Named in L’Epuipe’s and Ligue 1’s team of the week, plus voted MVP on Monaco’s official website, gaining such accolades was a fine reward for his exceptional output.

Persistently scanning his environment so he knew where nearby defenders and his teammates were situated in relation to the ball, this gave him the knowledge he needed to find vacant spaces. Especially damaging when receiving between the lines of Montpellier’s midfield and defence, he constantly evaded his markers.

With defenders wary of stepping out to Volland due to not wanting to leave gaps for Wissam Ben Yedder or Gelson Martins to exploit in behind, oceans of space were available to Volland. Factor in how well he positioned himself so he could be accessed directly and not in the cover shadow of a Montpellier midfielder added to his threat.

Granted freedom to drop deeper centrally and wider in the half spaces, the way he helped form overloads was crucial towards Les Monegasques progressing through the thirds. Connecting play superbly in the middle and final thirds of the pitch, there was much to admire about his spatial awareness.

By shrewdly interchanging with Martins out wide, Volland was able to mix things up and further compound issues for his foes in keeping tabs on him. In addition, by getting on the ball on the wing, he could be isolated and use his 1v1 skills or embark on late blindside runs into the area while allowing Martins to underlap.

So good on the ball, his blistering forward forays were a joy to watch. Blessed with a slick first touch and ball control, once in possession he expertly evaded markers with some wicked spins away from danger, neat feints and nifty alterations in pace and direction.

Adapting his receiving posture so he could instantly get away from the pressure or protect the ball, getting these fundamentals spot on was another key to his success. It also deserved mention how his low centre of gravity and immense core and lower body strength assisted him in riding challenges and winning fouls.

It was fitting that his clever movement was an essential element for two of Monaco’s goals. The first saw him smartly angle his run between defenders into the area to latch onto Caio Henrique’s cutback before applying a cool finish.

Then, for their third, the way he astutely received possession between the lines served as the catalyst for breathing life into the attack that led to Martins scoring.

Meanwhile, his passing was another highlight, with him animating attacks and ensuring things ticked over nicely for the home team. While his magical outside of the boot crossed assist for Ben Yedder, which drew comparisons to Ricardo Quaresma’s famous technique, was the clear highlight, there was much more to admire about his distribution.

Be it linking play coherently in close quarters with some delightful one and two touch passing, spreading the angle of attacks or striking some splitting through balls to oblige runners in behind, Volland’s class caught the eye.

Now up to four goals and four assists in 17 matches for Monaco in all competitions, the former Bayer Leverkusen star will be hoping this sterling body of work will truly kickstart his season.

Boasting so much quality, which he emphatically showcased last season on his to notching 17 goals and eight assists in Ligue 1, Volland certainly silenced his critics on Sunday.

The challenge will now be maintaining this sort of level. If he can, there’s no doubting Monaco will continue their rise up the table, for when he’s at the peak of his powers, he’s one of the elite attackers in the entire French top flight.