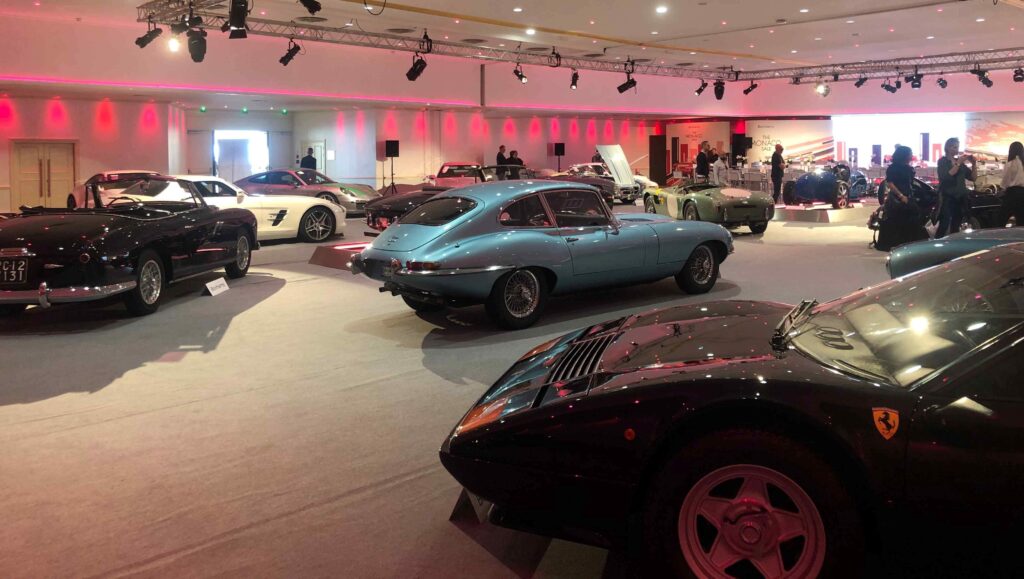 The “Les Grandes Marques à Monaco” auction organised by Bonhams will take place from 13 to 15 May. The dozens of cars in the sale are on display at the Fairmont Monte-Carlo Hotel. The editorial team at Monaco Tribune has made a selection for you. Here are five models that will be going under the hammer this weekend.

One of 292 models built at the time. Designed in the early 1980s, it rapidly became a limited edition. There are two different versions, “Sport” and “Komfort”, referring in particular to the vehicle’s interior. When it first came out, it was the fastest legally produced car in the world. René Metge and Dominique Lemoyne won the 1986 Paris-Dakar Rally in their Porsche 959. Estimated sale price: €1.4m – €1.6m.

SEE ALSO: On your (Top) Marques- the supercar show is back

This car belongs to Alfred “Fredy” Zurbrügg. If that name doesn’t ring a bell, the previous owner’s might. On the set of the 1971 movie Le Mans, international star Steve McQueen invited one of the cooks on the set to choose a car. Alfred “Fredy” Zurbrügg replied: “I don’t have a driver’s licence”. Steve McQueen insisted and Fredy chose the Jaguar out of the cars that were bought to make the film. 52 years later, here it is, as new, for sale. Estimated price: 250 000€– 350 000€.

Certainly the most expensive car on offer in this auction. Far from the current models, this almost 100-year-old Bugatti has had dozens of different owners, from France to the United Kingdom by way of many racing circuits. Because the Bugatti Type 35 is in fact a racing car. It won more than two thousand competition victories with its different models: Type 35, 35A, 35C, 35T, 35B, 37, 37A, 39 and 39A. Estimated price: €2M – €3M.

A car with an almost aggressive appeal. In the mid-1960s, Ferrari introduced a more luxurious look to its cars. The 275 GTS boasts wide comfortable seats and a varnished wooden dashboard. This model was driven by Jean-Pierre Beltoise, winner of the Monaco Grand Prix in 1972. Estimated sale price: €1.4m – €1.6m.

This last model is more recent and you are probably more familiar with it. A beautiful, rather “classic” sports car, the Porsche 911. 991 copies of the 911 R were produced, and this is number 532. This powerful model, unlike its predecessor, the GT3, was fitted with a brand new manual gearbox. Porsche only offered and sold the 991 models built to its “favourite customers”, much to the disappointment of many. Estimated price: 300 000€– 400 000€.

Auctions sound pretty exciting, but how do they work?

“The bidding often starts at 50 or 60% of the vehicle’s original price,” explains Paul Darvill, Bonhams’ European Sales Director. Prices will gradually go up as bids are placed and according to a precise scale. For cars in this price range, the auctioneer will ‘raise’ the bids by €10,000 at a time. “An auction is also an event, it’s also a show […] It would not be interesting if someone were to win with a single very high bid”, he adds. “Some cars have a reserve price and will not be sold if they do not reach it. Those without reserve prices must and will be sold, regardless of the final bid.”

How to take part, how to pay

Potential bidders need to register beforehand. Identity card, address, sometimes a letter from the bank to verify the funds… the checks on potential buyers are quite detailed. Once registered, bidders can take part directly in the room, by telephone, by internet, or by a written bid. Careful though, if you ‘win’ a car for €400,000, you have to add 15% of the amount as a commission for the organiser, in this case Bonhams. Depending on where the lot is from, taxes may also apply.