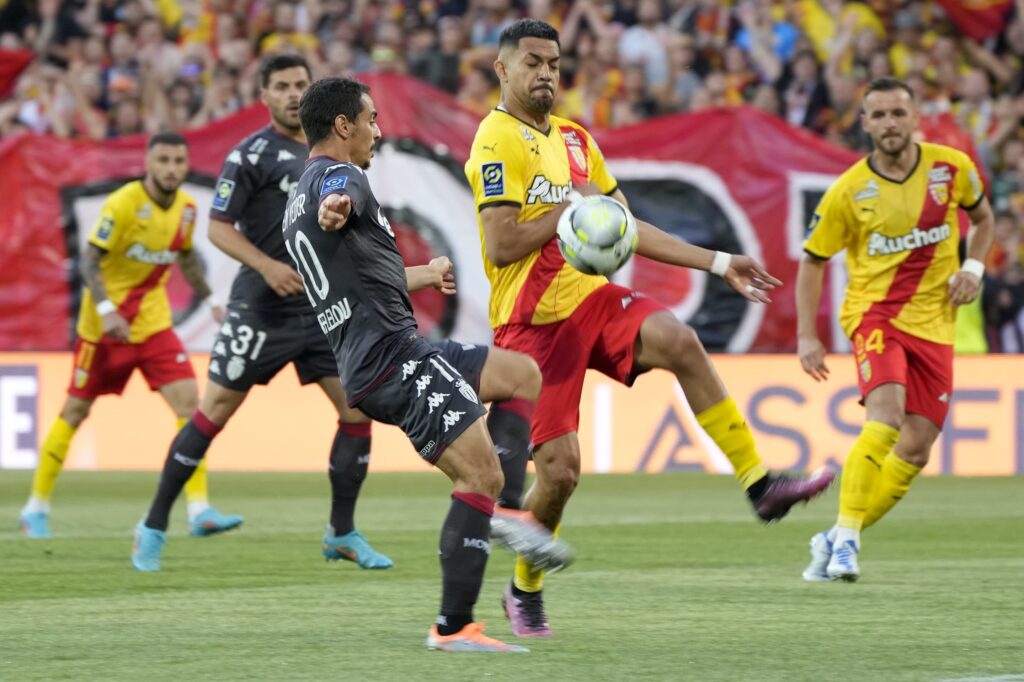 Although AS Monaco ultimately achieved their aim of finishing on the podium to secure a Champions League place, Lens’ late leveller means they’ll now have to progress through the preliminary playoffs instead of gaining direct entry, which they would’ve done if they’d won.

Under the watchful eyes of travelling club president Dmitri Rybolovlev and 1000 Monaco fans that made the trip to the Bollaert-Delelis, Monaco were immediately put on the back foot, as Lens raced out of the blocks in front of their home fans. Unleashing a slew of dangerous attacks in the opening 20 minutes that forced Alexander Nubel into some smart saves, Les Sang et Or quickly asserted themselves on the match.

Lens eventually rewarded themselves for their thunderous start when star wingback Jonathan Clauss’ cross deflected into Przemyslaw Frankowski’s path to give them the lead following a handling error by Nubel.

With the score 1-1 at the interval, both teams came out for the second stanza with gusto by producing some solid openings that were ultimately unfruitful. It would, however, be Monaco who went ahead, with the masterful Wissam Ben Yedder finding the back of the net just after the hour with a typically clinical finish.

Ahead 2-1 with 30 minutes to play, Monaco’s backline were smartly repelling Lens’ attacks and holding firm, as they appeared destined to obtain their 10th straight victory. But just before the final whistle blew, Lens delivered a dagger to the heart of Monaco, as Ignatius Ganago scored in the 96th minute to make it 2-2.

“The disappointment is great, but above all there is a lot of pride for my players, my staff, our leaders and our supporters,” Philippe Clement stated afterwards.

“This feeling of pride is much greater because in recent months I have seen a team of winners, who always want to take the three points, like today’s game, with a lot of commitment and character in difficult times. I’m sure we’ll bounce back, because in the second half of the season we’re the team that took the most points (40 points – 12 wins, 4 draws, 3 losses), with a ten game unbeaten streak to finish.”

The Stade Louis II held a special watch party for the Monaco supporters, who were eager to cheer on their team. Despite Monaco falling behind early, the nervous watching Monegasque supporters regained their voice when Badiashile levelled.

Then when ASM took a 2-1 lead thanks to Ben Yedder’s goal, provisionally ensuring the club’s direct passage to the Champions League, it was an incredible sight to see the stadium really roar into life.

During the last twenty minutes, the supporters chanted the name “Wissam” (the hero of this season), as the inspirational captain looked like he’d propelled his team into second.

But with Lens scoring in the last minute of added time, it was sheer disillusionment for the Monaco faithful, in a game where the last seconds put an unfortunate dampener on the night.

Positive finish deserves to be celebrated

Even though it wasn’t the ending Monaco were after, the upside attached to their amazing close to the campaign far outweighed the negatives. After all, the scintillating run of form they embarked on to win nine of their last 10 was nothing short of remarkable to even put them in contention for UCL qualification.

Having ultimately achieved their aim of finishing in the top three while facing plenty of adversity along the way, once the dust settles, an overriding sense of positivity will surely emerge.

Indeed, this was something Aurelien Tchouameni aptly explained in his post-match comments. “We are obviously very disappointed. When you look at the face of the game, we were seconds away from finishing second in Ligue 1. Unfortunately, the scenario was not in our favour, it’s the drama of football,” he noted.

“Tonight was not for us, maybe tomorrow it will be. We are not losing our runner-up position tonight. We had to do a big “run” to find ourselves where we are, so it’s still positive overall. We have come a long way.

“A few months ago, if we had been told that we would finish in this position, few people would have believed it. It is very good what we have done. We would have liked to have had better, but it’s already positive to be on the elite podium again (the 29th time in the history of the club, a record in France).”