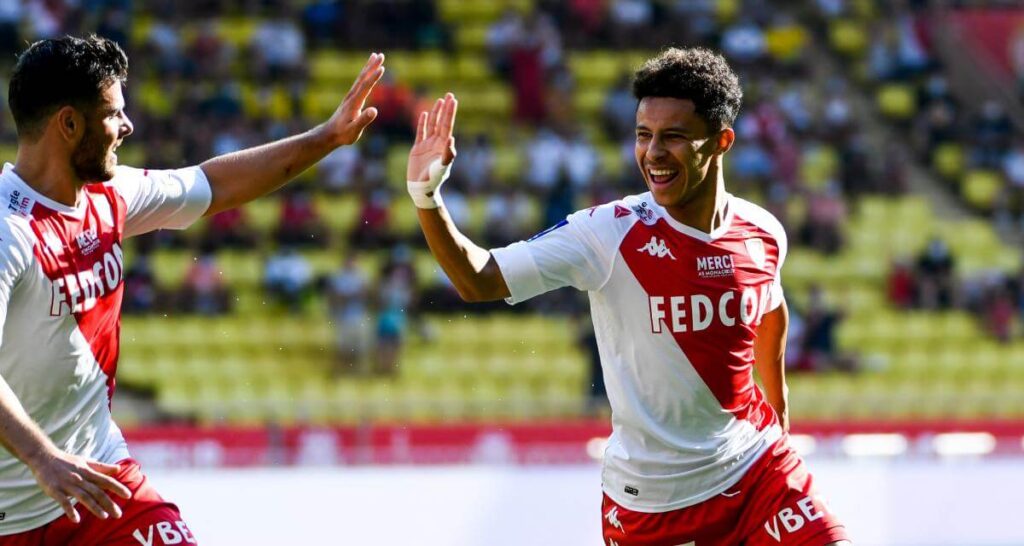 In a game full of milestones that saw AS Monaco win their 1000th Ligue 1 match and Cesc Fabregas play his 800th professional game, Sofiane Diop marked the occasion with a fine performance.

Putting in an excellent all-round display, Diop hardly put a foot wrong throughout the 2-1 win over Nantes, as he bagged his first goal for the club and even earned himself a place in L’Equipe’s coveted team of the week.

Operating in central midfield alongside Fabregas and Aurelien Tchouameni, Niko Kovac granted him plenty of attacking freedom to push up and impact in the final third. Displaying his excellent spatial awareness and knowledge of where best to position himself, his movement was an integral aspect towards his success.

Beginning with his powerful upfield runs, Diop was rapid to exploit the open spaces within the Nantes backline between central defenders or in the channels. Once noticing a trigger like Wissam Ben Yedder dropping deep, which drew his defender with him, or a Nantes fullback getting drawn out, Diop pounced. By doing so, this maintained depth to attacks while further unbalancing the Nantes backline.

His runs into the box were always vital, for these late arriving surges were so difficult to track. Diop’s crafty run into the area served as the catalyst for his beautifully taken goal, where his back post run saw him create a 3v2. Although the deflected cross favoured him, this certainly allowed him to be well placed to finish with aplomb.

The diminutive midfielder’s contribution didn’t end here in this regard, for he checked towards the ball smartly, before linking play with some neat one time passes and flicks while generating overloads in central areas. In addition, the way he ventured wide and into the half spaces to manufacture 5v4 or 4v3 numerical superiorities was key in Monaco progressing upfield.

Also rotating coherently with his teammates, performing some nice opposite movements, shrewdly drawing opponents to open passing lanes and finding spaces between the lines, his movement was the cornerstone of his fruitful match.

So comfortable on the ball and adept at withstanding pressure, the technically gifted 20-year-old was also excellent with his dribbling and passing. Scanning his surroundings keenly so he knew where nearby opponents and the vacant spaces were, this meant he could adapt his body posture to protect the ball or turn instantly. Factor in his slick first touch and control, and this amplified his worth, which saw him embark on some damaging forward runs.

Showcasing his razor sharp handling in tight spaces, neat repertoire of feints and body swerves to outfox his man and smart accelerations and decelerations, Diop was efficient at beating or gaining separation from his man.

Progressing in his passing and always looking to hit vertical or diagonal balls to his attackers, his intent was great to see. Not only did he strike some incisive passes into feet, but he also found teammates in between the lines, in the channels and in the half spaces. Getting his accuracy and weighting spot on, this meant his targets could smoothly control possession to then execute their actions.

Moreover, by striking some good switches of play, neat through balls, combining expertly in tight zones or by calmly recirculating possession when the higher risk option wasn’t viable only added to his effectiveness.

Keeping things ticking over and keen to make things happen, Kovac was full of praise for both he and Willem Geubbels when asked about Diop’s performance.  “Sometimes as a coach you are lucky,” he said.

“This is the result of the hard work they have put in over the past two months. This is what I tell all the young players in this squad: if you give your maximum every day in training, you will play. I hope that these goals will give them the motivation to give even more of themselves. Well done to Sofiane and Willem.”

By the numbers, the fact he completed 63 of his 70 attempted passes, 10 of 12 passes into the final third, four progressive runs, four accurate long balls, two successful dribbles and two touches inside the box illustrated his worth.

With competition for places in Monaco’s midfield fierce, Diop definitely staked his claim to his manager in the absence of Aleksandr Golovin and Youssouf Fofana for a regular starting berth with his accomplished body of work.

Hoping he can use this display as a platform to kick on, observing Diop’s progress will be intriguing in his quest to cement a spot in Monaco’s first choice eleven.