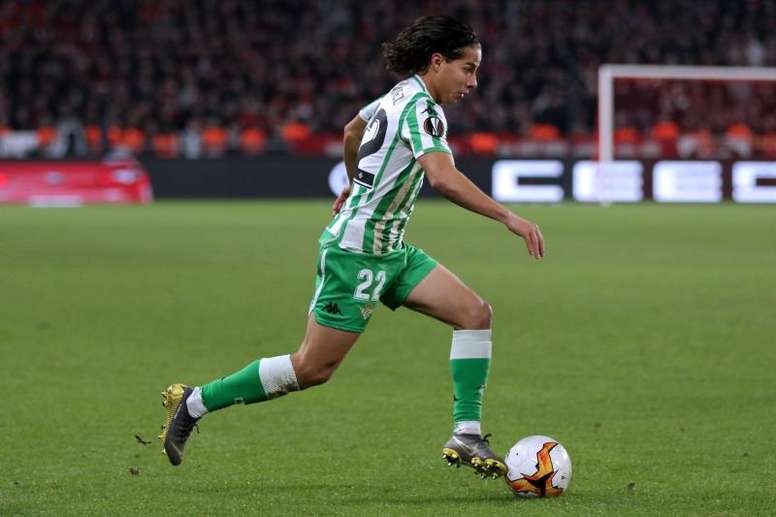 Since announcing himself at Real Betis by scoring a dramatic equaliser in a 3-3 draw against Rennes in the Europa League back in 2019, Diego Lainez has struggled to truly stamp his mark with Los Verdiblancos.

Having joined Betis from Club America for a sizeable transfer fee estimated to be around €15 million, many expected the remarkably gifted talent, who was dubbed the “Mexican Lionel Messi” due to his dribbling wizardry and diminutive stature, to make huge waves in Europe.

With competition for places fierce, his inconsistency and the fact Betis have changed their manager frequently, he has been unable to gain traction as he initially desired. When Manuel Pellegrini took over in the summer, it was hoped his fortunes would be on the up, especially considering the Chilean tactician’s comments at the start of the campaign. “He is a player in whom I have a lot of confidence,” Pellegrini told Marca.

“He is young and he still has to improve some aspects of his game, but every time he enters he shows dynamism and an ability to do different things with the ball.”

Unfortunately, however, Lainez hasn’t won over Pellegrini, who’s only granted him five La Liga sub appearances totalling 64 minutes. As a result, reports are suggesting a move away could be on the cards, with AS Monaco among the interested parties.

An exceptionally talented attacking midfielder who can operate both centrally and out wide, he’d certainly bring some extra quality and depth to Niko Kovac’s options. Capable of creating moments of magic with the ball at his feet though his dribbling and passing, he can be a real game changer on his day.

Relishing every opportunity to drive his team forward on the dribble, he gains vital territory while provoking pressing actions from one or more markers, which can importantly produce space for teammates. Moreover, when 1v1, his vast array of maneuvers to outfox his foes, including feints, shimmies, stepovers, nutmegs and roulettes, ensure he’s a nightmare for defenders.

In addition, his razor sharp turns and ball control, in combination with his slick changes of pace and direction, compounds issues for his opponents. The fact he’s so good at receiving on his back foot to turn opponents and adjusting his receiving posture to protect the ball are also highlights.

So comfortable under pressure to boot, little Lainez shines in close quarters and when harried, as his elusiveness and guile means he can weave out of danger or win fouls.

Creative and progressive in his passing, his imagination and incision is an asset when breaking down deep defences. Able to break the lines, strike measured through balls in behind (on the ground and in the air), switch the angle of attacks and engage in rapid combination play, he’s excellent in carving out openings.

The way he disguises his passes with his body and eyes, which tricks defenders, before then hitting his pass to a different target is a joy to watch. By hitting sweet crosses and cutbacks, plus diagonal passes to dropping attackers or midfielders between the lines has been key too, which move blocks horizontally and vertically, these are further strings to his bow.

Tying it all together with his movement, Lainez finds space neatly between the lines, in the half spaces and when dropping into midfield. In doing so, he astutely forms overloads to enhance his team’s chances of progression while destabilising the opposition block or so he can receive freely to turn and dribble.

Although not something he does all the time, his crisply timed runs in behind can be a handy weapon that surprises defences so he can pop up in excellent scoring positions.

A quality byproduct of his movement comes from how it draws markers out to manufacture room or opens pass lanes for teammates to exploit.

Having worked under some brilliant tactical minds at club and international level in the form of Quique Setien, Pellegrini and Gerardo “Tata” Martino, he’d certainly possess the knowledge to adapt to Kovac’s philosophy.

Former Mexico national team manager, Juan Carlos Osorio’s comments back in 2019 illustrate how highly he’s rated. “He is currently the greatest talent of Mexico,” he gleamed.

“Diego is a smart player, very skillful, a real left leg, fast with the ball on his foot and very strong in the one-on-one. Diego has the speed of Finidi George and Marc Overmars and is a true creator of the game,”

Blessed with so much talent and still just 20, time is definitely on Lainez’s side, but he’ll want to choose his next destination carefully, for he’ll need to find a home where he can get regular minutes to stamp his mark in Europe.

Whether that’s at Monaco or elsewhere, only time will tell.