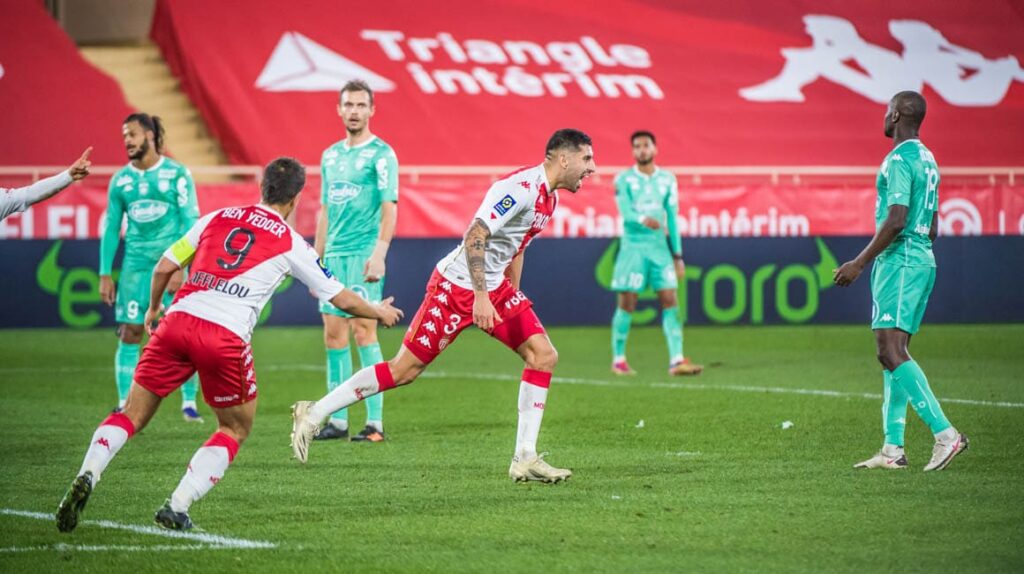 Having started the 2020/2021 as a backup to then first choice central defensive partnership in Axel Disasi and Benoit Badiashile, it’s been impressive how Guillermo Maripan’s emerged as an undisputed starter for AS Monaco.

Since being afforded an extended run in the team, which began in the middle of December, Maripan’s emphatically repaid Niko Kovac’s faith through his exceptional performances. “I wasn’t playing a lot but I continued to work hard out of respect for my teammates, for the staff and for the club. This is something that was close to my heart. I wisely waited for my chance. When I had the opportunity to play, I knew how to seize it. I continue to train to be the best I can be.

“I had some difficult times at the start of the season. This period was a real lesson for me because I did not feel well physically. But, I worked hard to get back to my best.”

Going from strength to strength in the last month especially, he’s been an integral component towards Monaco’s incredible recent run, which has seen them win eight straight and go through all of January without dropping a point.

Before mentioning his defensive exertions, his offensive contributions deserve huge praise. Having recorded four goals and an assist in his last seven matches, this has amplified his worth. Such a weapon on set pieces, an area Monaco excel in, the Chilean powerhouse has offered a brilliant target for the likes of Aleksandr Golovin and Djibril Sidibe to locate. Picking up the ball’s flight path quickly and remaining concentrated, this, in combination with his supreme heading ability, size and strength, ensure he’s a nightmare for defenders to deal with.

Maripan’s attacking output importantly extends beyond the aforementioned, for his passing and ball carrying prowess have benefited Monaco’s build up immensely. On top of recirculating possession coherently and moving the ball quickly, the way he’s struck some exceptional defence splitting balls has been a real highlight.

Whether breaking the lines to pinpoint the likes of Wissam Ben Yedder, Kevin Volland and Sofiane Diop, hitting searing switches to find the wingbacks and playing incisive through balls to oblige runners in behind, his range and execution has been a joy to watch. The below examples, including his sublime assist for Volland vs. Lorient, depicts his class in this area.

Always keen to put the opposition under pressure with his dribbling, if there’s a chance to drive forward, he’ll take it. Wanting to not only gain territory with his ball carrying, but also to provoke a press to subsequently create a free man, Maripan’s comfort and confidence on the ball has shone.

Meanwhile, in terms of his defensive output, there’s been much to admire, for he’s undertaken his work with assuredness, clarity and intelligence.

A fine reader of the play and very awake to opponents’ movement, this helps make up for his lack of pace, allowing him to anticipate scenarios unfolding to be well positioned to stop opposition passages. Aggressive at monitoring his man when they drop deep, where he’ll get touchtight so his man can’t turn him or control cleanly, this makes life tough for his foes while generating that vital perceived pressure. Then, when attackers burst in behind, Maripan reacts quickly to get on his bike to track them and use his arms to impede their momentum when possible, which helps cover over his lack of speed.

Positionally sound and aware of his surroundings, this has seen him adjust his body admirably when managing crosses and cutbacks, where he tailors his position depending on the type and location of delivery. In addition, how he chooses when to hold his post, step out, drop back, shift across or cover a teammate adds to his worth.

Partnering exciting youngster Badiashile in the heart of defence, his experience, leadership and organisation skills have been a big benefit, for his regular communication and gesturing has helped ensure his colleague and defensive line in general remain compact and in shape.

Timing his tackles and interventions well, he blends force and smarts to regain possession sharply on his way to winning 100% of his tackles and committing just 0.44 fouls per game. Never afraid to get stuck in, his approach admirably sets the tone for his teammates to follow.

Standing an imposing 193cm and possessing sound judgement, Maripan’s accomplished in the air too, as he wins a good chunk of his battles to clear the danger and help his team recover crucial second balls.

It’s been impressive to note how effectively he’s nullified some of Ligue 1’s finest marksman, such as Kasper Dolberg, Gaetan Laborde, Andy Delort and Dario Benedetto, with him keeping them quiet during Monaco’s terrific run.

Another testament to his exceptional form arose from the fact he was named in Whoscored’s (a renowned football statistics website) team of the month for January, which is compiled by comparing the best players in Europe’s top five leagues.

Thriving on both sides of the ball, Maripan’s rise to becoming a starter has certainly been one of the highlights of the campaign for this exciting Monaco.

Now his challenge will be to keep up his high level in the all important second half of the season, as Monaco hope to finish the season in style.