Resurgent Disasi crucial towards Monaco’s recent solidity at the back 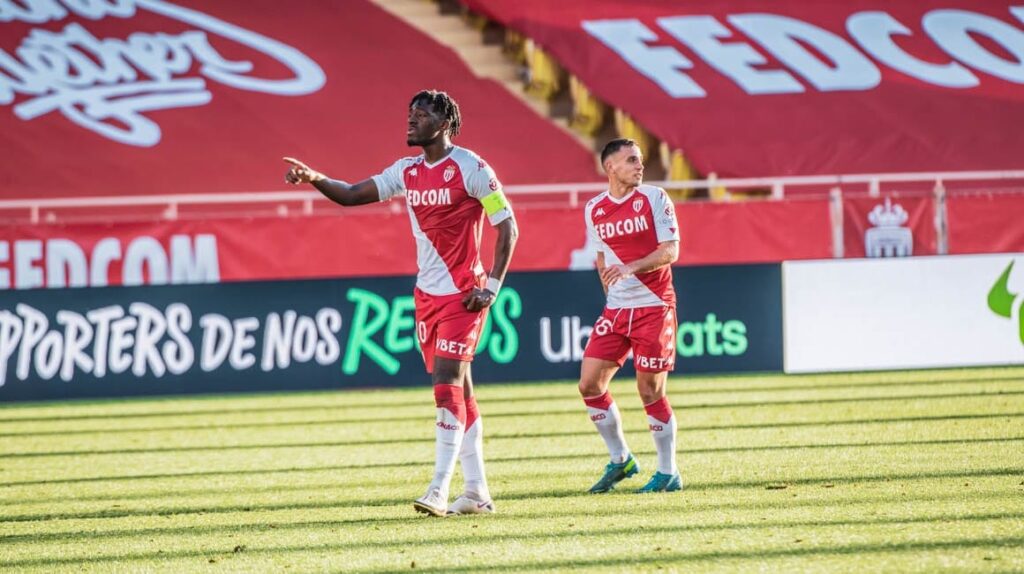 Axel Disasi’s determination and commitment to prove his worth to AS Monaco boss Niko Kovac has seen his fortunes improve dramatically over the last month.

Having joined from Reims for €13 million, the tremendously gifted central defender made an immediate impact for Les Monegasques by scoring on debut against his former side in a 2-2 draw. As the weeks passed by he maintained his starting spot alongside Benoit Badiashile, but following two red cards and some unsatisfactory defensive efforts, Kovac opted to choose the more experienced Guillermo Maripan ahead of him.

In addition, the Croatian tactician’s decision to change the system to a 3-2-4-1 in possession around the turn of the year saw Kovac regularly leave him out, opting to use Maripan, Badiashile and Djibril Sidibe as a third centre back instead. This meant Disasi had to be content with a place on the bench, only to receive sporadic substitute appearances.

Importantly, however, he kept his spirits high through this challenging period, as his patience and hard work eventually paid off. Granted a start in Monaco’s colossal clash with Paris Saint-Germain, he repaid Kovac’s decision to choose him by putting in an exceptional display. Crucial towards Monaco’s 2-0 victory, the 23-year-old’s contribution was integral towards his team keeping a clean sheet and shutting down the electric Kylian Mbappe.

This masterful display against the champions has certainly been the catalyst for his upturn in form and getting regular minutes, for he’s started four of Monaco’s last five games. “In the case of Axel (Disasi), who performed well against PSG, even if he has played less lately. He is a central defender, but we have seen that in 4-4-2, I am quite comfortable to align him in the right lane at the full back position, in a hybrid pattern,” Kovac explained on his situation.

Needing to adapt to operating as a central defender in possession and a right back without the ball, his comments on his role made for intriguing reading, stating: “I must have played two or three games at this post with Reims. Unlike the central station, there is a lot more racing and playing volume to be had. I’m learning, it allows me to discover another job. Basically, I am a central defender. The biggest difference is when you lose the ball, you have to put in a lot of effort.”

He then gave some interesting insight into how he coped not playing as much as he would’ve liked. “I didn’t give up and kept working,” he asserted.

“There is a personal questioning as well as with the coach. I was patient while I waited my turn. You have to give your all to stay on the pitch. The coach spoke to me, he maintained the confidence he had in me, and told me that he was aware of my qualities and sooner or later my luck would come.”

And it certainly has, with the imposing stopper yet again illustrating his class on the big stage throughout Monaco’s 0-0 draw with table topping Lille.

Vital in helping Monaco keep their fourth clean sheet in five matches, Disasi undertook his duties with authority and confidence. Operating at right back when defending, Disasi did a fine job of limiting Timothy Weah and later Jonathan Bamba’s impact, for he made excellent decisions to combat their threat.

Remaining concentrated and alert, he was quick to get touchtight to his markers when they dropped deep with their back to goal, as this served as a trigger for him to press aggressively so they couldn’t turn and dribble. Then, when they attempted to surge in behind, he reacted smartly to get on his bike and track their runs. The fact he’s so strong and possesses good pace certainly helped him too, allowing him to outmuscle, unbalance and keep up with Lille’s tricky, multifaceted attackers.

The way he dealt with 1v1 situations was also notable, for he took up balanced body postures, aiming to usher his opponents away from the centre and pounce when he could win back possession. Showing good reaction times while using his smart agility and long legs, this combined to see him pose as a formidable foe to beat on the dribble.

Standing a towering 190 cm and boasting a quality leap, the former Paris FC youngster held his own in aerial duels against his more diminutive opponents. This was especially handy when helping his colleagues deal with deliveries into the box both from open play and set pieces.

Getting his positioning spot on, it was important how he’d tuck infield when the ball was on the far side, in order to keep the defensive shape horizontally compact, which minimised the gaps between defenders for Lille to exploit.

Showing his excellent leadership capability, Monaco’s vice captain, who’s also worn the captain’s armband on occasion, illustrated this with his regular communication and gesturing with his teammates. The best examples of this arose when he and Ruben Aguilar would crossover marking duties when their markers switched positions. Dealing these scenarios with clarity, the pair dovetailed effectively so they didn’t lose markers, which is easy to do due to the chaos such quick rotations can cause.

Exercising sound judgement and always awake to surrounding danger, Disasi’s stopping work was once again at a high level on his way to making five ball recoveries and four interceptions.

Meanwhile, on the attacking side, Disasi did what was asked of him by passing the ball coherently and driving forward on the dribble when the opportunity presented itself.

Dropping infield to form Monaco’s back three in possession, not only did this give them cover in case of a turnover, but it also meant the home side could enjoy a 3v2 overload vs. Lille’s first line of pressure.

As a result, Monaco could circulate the ball crisply before waiting for an opening for one of the wider centre backs, Badiashile or Disasi, to carry the ball upfield into the vacant half spaces. As shown in the graphic below, his dribbles even at times enabled Monaco to develop 4v3 overloads out wide to help his team progress through the thirds. This numerical superiority, in combination with Lille not always pressing high also meant Disasi had time and space to pinpoint his passes. The powerful defender subsequently struck some wicked crossfield diagonals and line breaking passes to his attackers between the lines.

Calm and composed on the ball, Disasi completed an impressive 68 passes, as he proved valuable in Monaco’s desire to build out from the back.

Feeling more and more comfortable in this unique role he’s fulfilling within Kovac’s system after a period of adaptation, Disasi is fully aware of how beneficial this strategy is to help Monaco remain more secure. “We see that thanks to this new system, we can better control the opponent. We don’t give up a lot of chances,” he said.

“It’s good for the rest of the championship. We were strong lately, but now even more so. All this goes through work and discussion on a daily basis in training. We protect each other, we are well balanced all over the field.”

In brilliant form and back playing consistently again, you can guarantee Disasi will keep working tirelessly to maintain his place in the side. Offering so much on both sides of the ball, this campaign will have taught him so much and will arm him with vital experience in dealing with setbacks.

Handling being dropped manfully and continuing to strive to do his best, Disasi has clearly regained his manager’s trust as he’s now being fully rewarded for the exceptional attitude he displayed when he was out of the team.