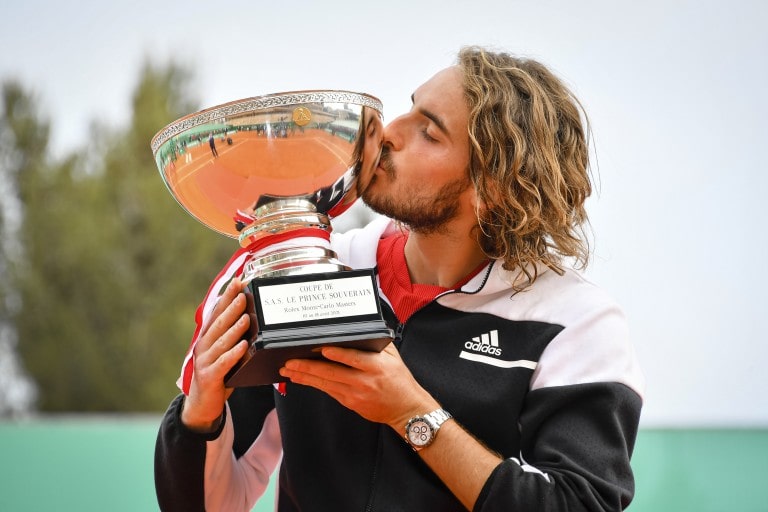 The Greek won the Monte-Carlo Rolex Masters this Sunday afternoon, defeating the Russian Andrey Rublev in straight sets in the final (6-3, 6-3).

Falling to his knees and throwing his hands in the air, this is how Stefanos Tsitsipas (ATP n°5) reacted just moments after winning match point at the Monte-Carlo Rolex Masters. Going down in history, his name will now be added to the list of all the other players to have won this prestigious tournament, as he replaces Italian Fabio Fognini as the reining champion. A superb run throughout the entire week, the Greek never once dropped a set. The 22 year old has now won the most illustrious title of his career: his first ever Masters 1000 tournament.

Up against Andrey Rublev (ATP n°8) and his killer forehand, the member of the Mouratoglou Tennis Academy delivered a stunning performance on the clay. Winning in straight sets (6-3, 6-3), Tsitsipas was finally able to come out on top in a Masters 1000 tournament, having fallen at the final hurdle in previous years: in 2018, he lost to Rafael Nadal in Toronto and in 2019 Novak Djokovic defeated him in Madrid.

“The best week of my life”

Knocking out Nadal in the quarter finals, the Russian seemed disheartened by his previous matches, two of which went to three sets, one against Nadal and the other against Roberto Bautista Agut in the third round. “I felt very tired after all the matches I played. But today, Stefanos was simply better than I was,” revealed the Russian, gracious in his defeat. “I feel a mixture of emotions. Of course I am pleased with my week and my journey, but I’m sad that I wasn’t able to show my true self and what I was really capable of in the final.”

All smiles, the Greek, who trains year round at the Mouratoglou Tennis Academy in Sophia Antipolis, was clearly delighted to have been crowned the winner. “This has been the best week of my life,” he beamed proudly. Having already won 21 matches this year, and suffered only five losses, he is now looking forwards to Roland-Garros, where he dreams of taking Rafael Nadal’s crown. Whatever happens, his season is well and truly underway.