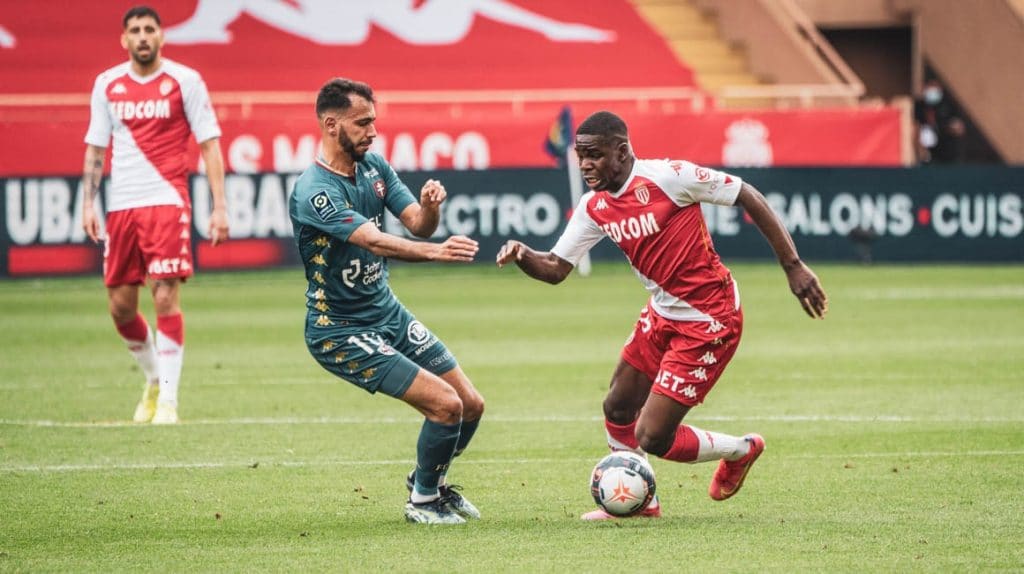 Eliot Matazo’s exceptional debut goal in Ligue 1 was enough to give AS Monaco victory over Reims, as the youngster repaid his manager’s faith once more by putting in a strong shift.

Handed just his third league start of the season and 12th appearance in all competitions, the Belgian put in an encouraging shift in his more advanced attacking midfield station. Despite being in a different role to his usual central midfield slot, he adapted impressively, transferring his skill set effectively into this somewhat unfamiliar post (which he has, however, played in before).

Full of tenacity and intensity, he applied his defensive qualities efficiently higher up by engaging the opposition with his aggressive pressing. So fast to accelerate and predict when his opponent was about to inherit a pass, he moved sharply to close them down. It was also important to note how he angled his pressure to use his cover shadow to block passing lanes behind him, thus compounding issues for opponents by limiting their options.

The way he tracked back to support his defence and quickly counterpressed immediately after possession was lost, helped stop Reims from getting too much traction into attacks down his side. Sharp to respond to loose balls and to anticipate the ball drop, this saw him regain possession for Monaco frequently.

Meanwhile, in terms of his offensive output, he got stuck into his work with similar success. Combining neatly in close quarters with some neat one touch lay offs and flicks, this helped him link play with his fellow attackers, central midfielders and wingback, Caio Henrique. Although he wasn’t hugely progressive with his distribution and made the odd imprecise pass, he usually got the fundamentals spot on to move the ball tidily.

Carrying the ball powerfully and at speed, his driving forward runs were certainly a feature of his play. Be it in transition situations or in methodical build up, once he knew he was in space, he’d burst upfield swiftly. Relishing any space afforded to him, his forward rampages offered a different threat to place the retreating Reims backline under pressure.

Indeed, his magical goal was a fine encapsulation of his work on the ball, where he picked up the ball from inside his own half before instantly charging forward. Jetting across the turf with gusto, by the time he’d travelled 50 yards, Matazo spotted Wissam Ben Yedder to his right, who he duly passed to. The 19-year-old then continued his run into the box while escaping the attention of multiple markers to coolly finish Ben Yedder’s accurate return pass.

On top of his incisive run for his goal, his movement continued to be a key aspect of his 64 minutes afield. Frequently occupying good areas to be an outlet for his teammates between the lines of the opposition midfield and defence, Reims found him an elusive man to keep tabs on.

Seeing as the Reims’ defenders were unwilling to step out to him, clearly wary that Ben Yedder would be alert to this, Matazo often found space to operate in. Very awake to move behind the back shoulder of opposing midfielders so the ball holder could have a free passing lane to him, his timing was excellent.

It also warranted mention how he’d often receive in forward facing body postures so he could immediately receive the ball and carry his momentum forward, which is far more advantageous than getting the ball back to goal.

Due to his central positioning, this left oceans of space for wingback Henrique to add width to attacks and attract an opponent. When this happened, Matazo would regularly then make a run into the channel or in behind to be an option. The Belgian and Brazilian would mix things up by interchanging positions, as Henrique would underlap while Matazo pushed wide to add some variety.

If the ball was on the far side, there were many scenarios when Matazo looked to make blindside runs into the box as the defenders tucked in centrally. In doing so, he gave himself a dynamic advantage over his more stationary, ball watching adversary to attack any deliveries.

In what was another promising outing by the classy prodigy, he further underlined to Niko Kovac that he can be relied upon when called upon. It was particularly notable how smoothly he adjusted to playing in this unfamiliar role in the absence of some key attackers, showing his tactical flexibility.

With Kovac having previously stated how impressed he is with Matazo’s progression, attitude and work ethic, the Croatian would’ve been suitably impressed once more, in a match where the youngster’s goal and all-round contribution made a real difference.