Manon Fleury on cooking sustainable dishes for a healthier planet 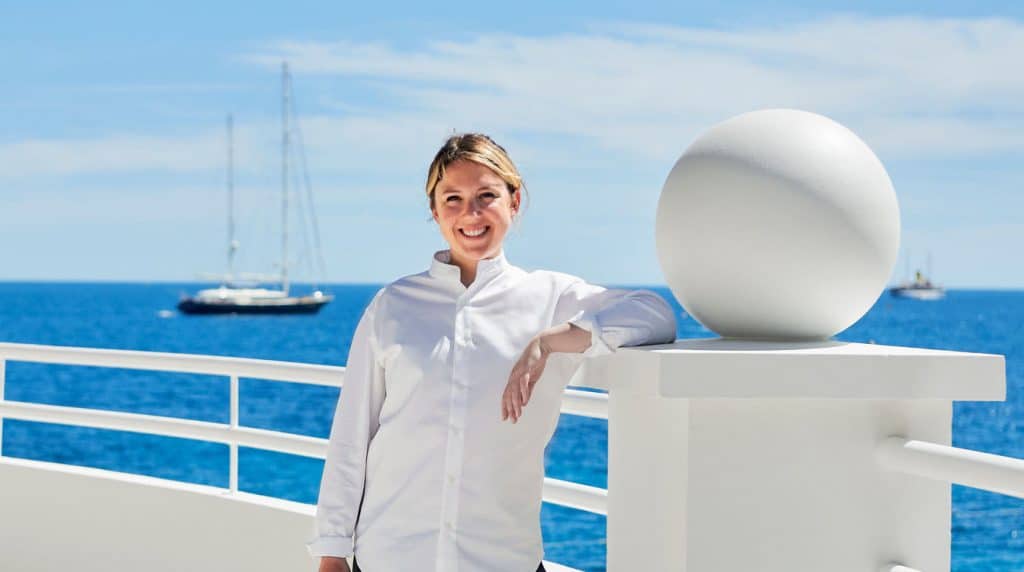 Manon Fleury is the Principality’s new culinary prodigy. Taking over Elsa’s reins, the Michelin starred restaurant at the Monte Carlo Beach, at the end of May 2021, this chef let us in on the secrets behind her culinary ethos, her desire to revolutionise the industry and what makes Monaco a unique place to work.

At just thirty years old, Manon Fleury is heading up one of Monaco’s finest restaurants. Elsa, her “haven of peace”, can be found right at the edge of the Principality, overlooking the turquoise waters of Roquebrune and offering guests an organic, local cuisine based on zero waste. A fresh perspective on cooking, this chef strives to make the most of every single ingredient, refusing to throw anything away.

A graduate from the prestigious Parisian school Ferrandi, Manon Fleury came to Monaco after working in the United States and spending a year at the head of the Parisian restaurant Le Mermoz. Diligently vying for women’s seats at the industry’s table, Monaco Tribune met up with the woman inspiring sustainable change in her kitchen.

Less than ten percent of chefs are women. Do you feel a certain responsibility?

Yes, and that’s exactly why it’s important to give woman a voice in this industry. We’re underrepresented. Management, for example, is very important to me. Through my own work, I want to show that you can be a woman and have a job with a lot of responsibility, but also lead a completely normal life at the same time. We need to be able to show young girls who are getting into cooking that it’s possible for them to succeed.

Using arbitrary authority in the kitchen has been seen as the best method over the years, and that’s where this idea that kitchens are a very military environment comes from.

What is your ethos in the kitchen?

I want my chefs to feel comfortable. There are so many kitchens where that’s not the case though. Chefs come to work with a pit in their stomach and there’s a lot of stress and a real power imbalance. Before broaching the question of gender, for me we need to look at changing the power dynamics in the kitchen.

How do you do that?

We need to stop using arbitrary authority, which has been seen as the best method over the years, because that’s where this idea that kitchens are a very military environment comes from (laughing). I really focus on communication and I try to show our teams that we can also make mistakes and have problems. I’m hoping to create a trusting environment where our teams feels like they are able to make progress. I like guiding my chefs, taking them with me and encouraging them. Seeing my chefs progress and take on more responsibility is one of the most satisfying parts of my job.

What mark do you hope to make on Monaco?

Creating this trusting environment is exactly what I want to do.

Who has inspired you?

Pascal Barbot, from Astrance in Paris, is someone who has inspired me a lot. He took the time to properly show me the ropes and really taught me how to engage with food. I think that’s the problem in a lot of kitchens nowadays, we just teach things instinctively. But for me, there is a whole other side to learning. It’s more about focusing on your ingredients, asking yourself how you envisage the end result and how exactly you’re going to cook what’s in front of you etc… Cooking requires a certain awareness. That’s what I’m trying to pass onto my teams.

TV programmes don’t show what the job is really like

You fenced a lot as a teenager and reached a very high level. Have you found any similarities between the sport and your job?

(Laughing) Of course. Both involve a lot of adrenaline and I love that! It’s that idea of pushing past your limits and doing more than you think you’re capable of. But what’s also great about cooking is that you get to make other people happy.

Do you still fence?

No. Because I used to do it so much, I don’t think I could bear to just do it as a hobby. It’s because I’m so competitive, which is something that’s very important for cooking though.

If we don’t have producers that do amazing work behind the scenes, then there’s nothing left in the dish, there’s no story.

… so for you cooking is another competitive sport?

Yes and no. In the kitchen, first and foremost, you have to be a team player. TV programmes don’t show what the job is really like. Of course, there’s a bit of stress, as we do have to send out 25-30 plates in two hours, and they all have to be hot and taste good, but that can’t come at the expense of others in the team. Cooking remains a team sport.

Tell us about your organic kitchen gardens.

For me, it’s the virtuous circle that ensures the restaurant works and that we are able to pass on a story and a message to our guests. If we don’t have producers that do amazing work behind the scenes, then there’s nothing left in the dish, there’s no story. It’s completely empty, it’s like cooking with nothing. It’s actually our producers that dictate what we’ll cook. And as for creativity, it’s ten times better because you have specific ingredients you have to work with. At the moment, we’ve got broad beans, asparagus etc… and that’s what we’ll cook with.

I think that we’re really lucky to have such a cosmopolitan clientele. People from many different cultures live in Monaco and it’s interesting to see what they think about your cooking. Earlier a guest said to me, “it’s great that you have your own style…”, you couldn’t give me a greater compliment than that, having a style at 30 years old, that’s impressive!

It’s true that it’s a huge compliment, Monaco’s diners are very spoilt by local restaurants, they must be demanding.

Guests come to Elsa because it’s so tucked away, it’s a haven of peace that’s far from the hustle and bustle of central Monaco. And our cooking is inspired by our surroundings. It’s light, nothing too complicated. I’d have a completely different menu if I was cooking, let’s say, in the Hôtel Hermitage. We’ve adapted to being by the sea, and it’s a very inspiring place for us, as it is for artists and musicians too.