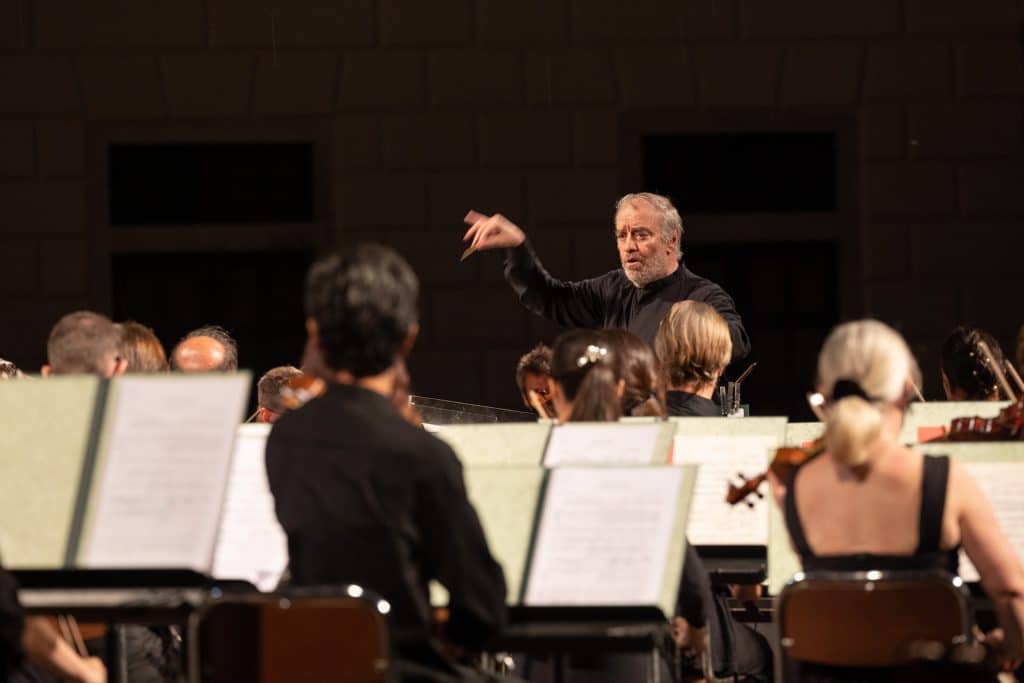 Right before the first summer concert at the Prince’s Palace, Monaco Tribune had the chance to meet world-renowned conductor Valery Gergiev. We interviewed the maestro about the art of conduction, what makes an interpretation successful and why he enjoys performing in Monaco.

He ambles in and shuts the window of the sobre palace room that has been converted into a dressing room. The pastiche of strings and winds playing away in the distance is at first muffled, then disappears completely.

“He wants to reach music,” tells us Didier de Cottignies, the artistic director of the Monte-Carlo Philharmonic Orchestra, when, earlier that day, we tell him that we will interview Valery Gergiev. “He wants to reach its soul.”

Gergiev speaks quietly, speaks slowly, always speaks of music before he speaks of himself.  “I have to stress that I am not talking to you as someone very important,” he says half-way through our interview. “I do not want to speak as someone who has given many great concerts. Certainly yes, I have performed all around the world. And I do it because of my love of music, in my own modest way.”

Conductors are different from one another. There are no rules written about what makes a conductor good.

But, whether he likes it or not, Gergiev is indeed “someone very important”. Valery Gergiev was born in Moscow in 1953 and has a career that spans over four decades and five continents. He is now the general and artistic director of the Mariinsky theatre in St. Petersburg, as well as the chief conductor of the Munich Philharmonic, amongst other appointments. Praised for his recordings of the Russian repertoire, Gergiev is known for occasionally conducting with a toothpick.

What is the role of the conductor?

In a perfect scenario, the conductor somehow inspires the orchestra, which then inspires the public. It is also good if the conductor is energetic throughout the concert, for sometimes it can happen that together with energy comes poetry and beauty. But conductors are different from one another. There are no rules written about what makes a conductor a good conductor.  It is also important to understand that the conductor himself does not play. He must make his presence felt through the orchestra.

Orchestras quickly recognize if the conductor is full of music, or if his work stays on the surface and their collaboration will not amount to much.

What makes an interpretation of a piece stand out?

The best artists bring something new, something unusual, sometimes something radically unusual, to a piece. Sometimes, it works, and they are immediately recognised. Other times, the reputation of an interpretation grows slowly, and the conductor’s recognition is gradual.

How do you approach your work?

When I come to the orchestra, I simply think about the composer. If you start to think about how you can please the orchestra, then you will not be fully successful. You cannot blame your mistakes on the composers. The best way to be understood by the musicians, by the public, and by colleagues is to demonstrate your love, your deep interest, and your deep understanding of the piece you are conducting.

What qualities should a conductor have?

Orchestras normally never make mistakes. They quickly recognise if the conductor is full of music, or if his work stays on the surface and their collaboration will not amount to much. You can’t just make some emotional movements with your hands and close your eyes – that’s not how it works. So, to answer your question, you must come modestly but confidently. You must be respectful but demanding. In my experience, what makes a conductor a conductor is a big combination of qualities.  You must be emotionally generous. You must be rigorous. You must have dramatic power. Unfortunately, you need a combination of all these qualities. And then, of course, you must be able to interpret of at least 20 to 30 composers.

From Diaghilev to the French composers, Monaco was a fantastic place for classical music. It was known all over Europe as a cultural centre, and that is why, I think, musicians want to perform here.

How has your conducting style changed over the course of your career?

Well, I move less than before. I still think of how to influence the sound of the orchestra. How to put enough energy into it. I also think about colours, the colours of the music, and how to express them through my direction.

You have come to Monaco many times. What is performing at the Prince’s Palace like?

Thank goodness not only the buildings are beautiful, but also the atmosphere and the acoustical comfort here are outstanding. This is a very sincere opinion. I think that Monte-Carlo and its residents are blessed that they can sometimes enjoy music in this beautiful setting. I also know that the musical tradition here is very important. From Diaghilev to the French composers, Monaco was a fantastic place for classical music. It was known all over Europe as a cultural centre, and that is why, I think, musicians want to perform here. We want to do something to refresh these golden memories. At least for me, I think that is important. Diaghilev and the Ballet Russes were from the Mariinsky and I am very honoured to be here in my capacity as the director of the Mariinsky.

He walks away as soberly as he came in. The concert will later be cancelled because of torrential rain that sets in only a few minutes into the Prelude of Debussy’s “L’après-midi d’un fauve.” Perhaps, as he walks away, he already knows. Perhaps, he has been looking at the sky, pewter-like.