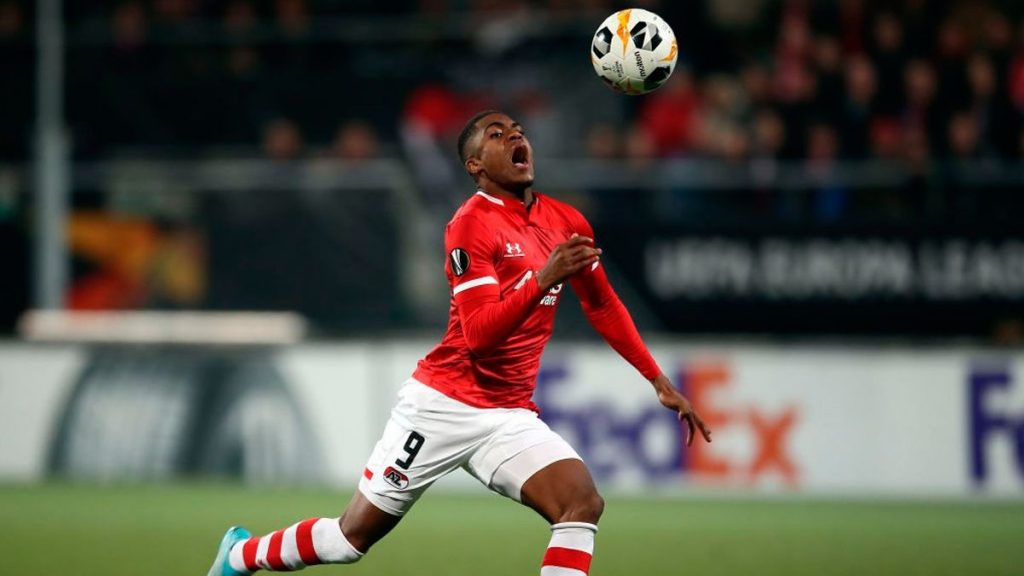 With the transfer window now in full swing, rumours and innuendo have been firing in from all over the place.

AS Monaco certainly hasn’t been immune from the speculation, for a host of players have been linked with the club in recent weeks. The latest piece of news doing the rounds are reports claiming Monaco are interested in bringing in tremendously talented Dutchman Myron Boadu.

Having risen through the highly regarded AZ Alkmaar academy, the centre forward rose to prominence during the 2019/2020 campaign, where he registered an impressive 14 goals and eight assists over his 24 Eredivisie matches.

Bursting onto the scene impressively, Boadu quickly earned a call up to the senior Netherlands team, where he enjoyed the perfect debut by coming off the bench to score the opener in a win over Estonia.

Coming into the 2020/2021 season full of confidence, Boadu surprisingly endured a challenging first six months of the season, which saw him muster just six goals in his first 21 league games. But the 20-year-old importantly turned things around by bagging a hat trick against VVV-Venlo and a brace vs. Feyenoord to reverse his fortunes.

Boadu’s uptick in form subsequently meant he finished the season with a very respectable 15 league goals, which put him in contention to make Frank de Boer’s Dutch squad for the Euros. Despite ultimately missing the cut, Boadu still proved his worth by catching the eye at the Euro U21 finals with his double against a star studded France side underlining his quality.

Seeing as Monaco have been credited with an interest, he’d be an extremely astute acquisition, for he’s a player with huge potential and who already boasts so many of the desired attributes required in the modern game.

Despite his tender years, the Dutchman is a wonderful finisher, who can find the back of the net from a wide array of scenarios. Two footed and remaining composed, this is valuable when he’s confronted with 1v1s against the keeper and high pressure instances.

Be it scoring drives from outside the box, instinctive first time finishes from close range, excellent placed finishes into the corners, smart dinks or rebounds using his quick reactions, he has a finish to match most situations.

A fine reader of the play who evades markers effectively to gain separation and pick up the ball’s trajectory, this enhances his menace.

Technically proficient and comfortable on the ball, there’s a lot to like about his ball carrying and passing. Blessed with rapid pace and thriving when being isolated vs. an opponent and in transition sequences, markers find him a nightmare to contain. Upon factoring in how he uses his close control, feints, shoulder drops and nifty alterations in pace and direction to outfox his adversaries duly adds to his danger.

His prowess with the ball at his feet importantly helps him link play smartly on either foot with his back to goal, as he crisply combines with nearby teammates using incisive flicks and one touch passes. Moreover, even though his passing isn’t his most striking attribute, he’s supplemented the aforementioned with some handy through balls, crosses and line breaking passes.

Tying everything together with his movement, this elevates his game to another level. A master at picking his moments when to drop deep or burst in behind, this keeps defenders on their toes and places constant doubt in their minds.

Timing when to pounce, it’s impressive to see how he identifies when to get on his bike when there’s space to be exploited, with this coming particularly handy when running in behind and into the box. Awake to when gaps open up between defenders centrally and in the half spaces, plus when his marker is preoccupied, he does a fine job of peeling off their back shoulder and targeting openings.

A good user of dismarking movements such as double movements and zig zags, this vitally unbalances opponents to give him the separation he needs to embark on his runs unimpeded. The fact he curls and angles his runs to remain onside or to expose the blindside of opponents further punctuates his aptitude in this regard.

Due to his dangerous presence, Boadu regularly draws or pins markers, which has proven valuable in creating space for teammates or to open passing lanes into advanced areas. As he illustrated at AZ when parlaying with Calvin Stengs especially, once he’s familiar with his teammates’ tendencies and has forged an understanding with them, this makes him even more troublesome for opponents.

Always keeping his adversaries guessing, Boadu’s capacity to drop deep, run in behind and target good areas inside the box have ensured he contributes proficiently in build up and in supplying a target in and around the final third.

The only real downside to his game is his lack of aerial threat even though he stands at 1.81 cm and has brilliant athleticism. But this is something that can be worked on in time, with him sure to improve in this regard down the line.

Set for an exciting future at both club and international level, there’s no denying he’d be a terrific acquisition for Les Monegasques. And one who’d benefit immensely from working alongside not only Niko Kovac, but also the likes of experienced forwards Kevin Volland and Wissam Ben Yedder.

With many options to choose from and much to consider, many will be keenly awaiting his decision on where he’ll be plying his trade next season.