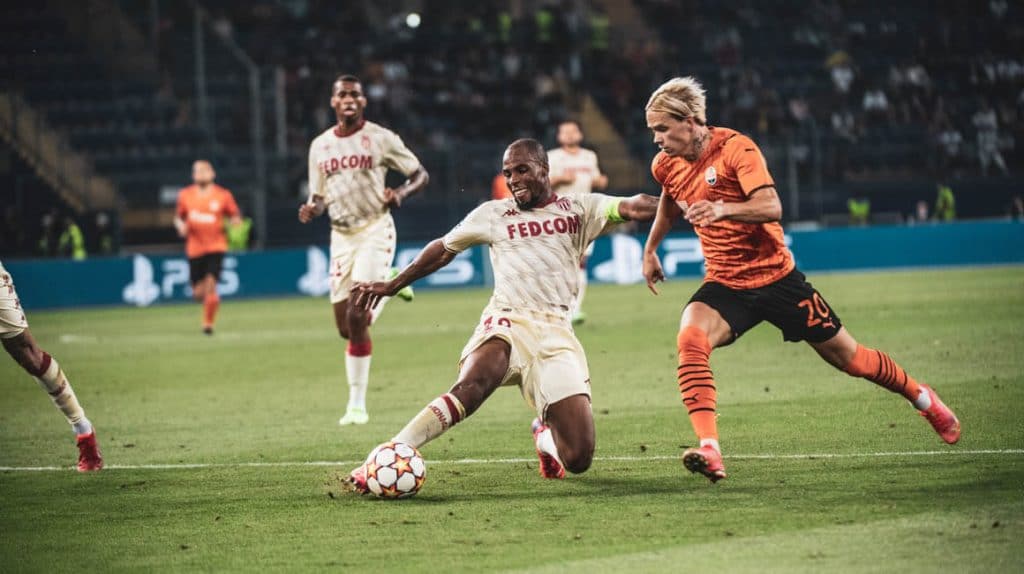 Even though AS Monaco fell agonisingly short of qualifying for the Champions League group stage, their second leg performance against Shakhtar Donetsk was still full of positives.

Djibril Sidibe’s display was unquestionably one of them, as the 2018 French World Cup winner was immense, with his defensive exertions being especially prominent.

Playing in his now customary hybrid role that essentially sees him operate as a right back when defending and a right sided central defender with added freedom offensively, he hardly put a foot wrong.

Engaging in an excellent battle with talented Israeli attacker, Manor Solomon, Sidibe’s experience, aggression and physicality saw him comfortably win the majority of their duels. Imposing himself on his diminutive opponent from the outset, the Frenchman’s intense pressing ensured Solomon never had any space to get on the ball with time and room to execute his actions.

Ramping up his pressure particularly when his man dropped deep with his back to goal, even when Salomon came to help in build up, Sidibe was always on his hammer. The graphics below illustrate this aptly, for Sidibe tracks him all the way, which sees him regain possession in the final third for Monaco so they can immediately attack their goal.

So quick and attentive to his man’s movement, the explosive defender was wide awake when his opponent ran in behind too, where he typically kept touchtight and surveyed his surroundings so his foe couldn’t get the jump on him. His pace notably helped him get back in transition sequences and support the slower Guillermo Maripan when required or if the Chilean stepped out to deal with an assignment.

Authoritative, positionally sound and forceful in the challenge, this saw him chime in with a slew of vital interventions to break up attacks. Getting his timing spot on was a highlight too, as he shrewdly recognised when to jump forward or hold his position.

Enjoying a 15 cm height advantage over Solomon, the 182 cm stopper’s aerial ability ensured he was rarely challenged in this regard too.

His statistics duly accentuate his elite stopping output, for he made 13 ball recoveries, five interceptions, four tackles, two clearances and won 10 of his 13 duels.

Offering plenty of impetus going forward as well, the former Everton man proved his worth in this phase.

Picking his moments to maraud forward on the overlap when Monaco were in the final third, he waited for Gelson Martins to tuck infield to get close to Kevin Volland, so he could generate crucial wide overloads. In such cases, he could be the free man and have time to assess his options before firing in a cross or cutback.

When not surging forward, he was key in ball recirculating while Monaco waited for an opening and expertly drew out Solomon to press him, which generated room in midfield for Volland to exploit. The example below indicates how the German can receive freely after Sidibe lures out his man to open the passing lane.

Driving forward intently with the ball at his feet, whipping in some lively crosses, striking a couple of neat through balls and hitting penetrating passes into the feet of his attackers added to his worth.

Giving his team security in the build up phase and another dimension in the final third, Sidide played his role beautifully to provide balance and offensive thrust when needed.

Clearly an ideal fit for this smartly devised role that Niko Kovac has given him, his recent comments on his position gave a fascinating insight. “It’s a little different. The coach asks us to stay behind to maintain superiority in case of a counter. I communicate a lot with Guillermo, Axel and Benoit to have five players in defence and the other five attacking. It’s a different role but I relish it, it takes a lot of concentration. We are in a good dynamic,” he explained.

Despite the cruel 3-2 aggregate defeat vs. Shakhtar, Sidibe and his teammates can hold their heads high following their tremendous second leg efforts.

Voted joint man of the match with Wissam Ben Yedder on Monaco’s official website, Sidibe will be hoping to keep up his exceptional level on Sunday against Troyes, where his presence will be vital towards helping his team’s aim of recording their first Ligue 1 victory of the season.