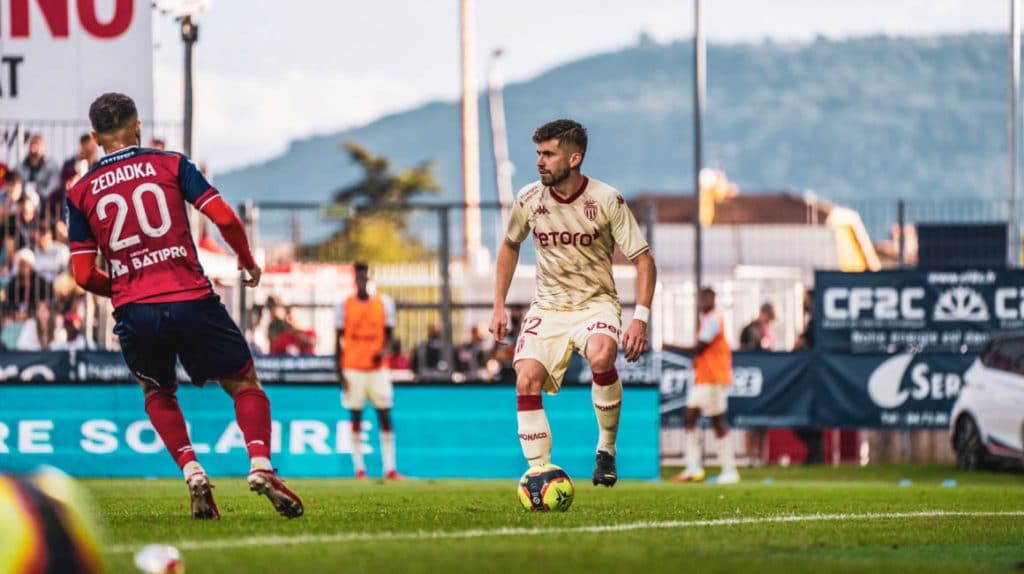 Having established himself as a mainstay within Niko Kovac’s plans last season, it’s been fantastic to see Caio Henrique continue to produce the goods in his second season with AS Monaco.

So consistent and dependable, the Brazilian’s been as solid as ever to begin the 2021/2022 campaign even though Les Monegasques have had their struggles so far.

Rarely letting his performance levels drop, his exceptional efforts against Clermont Foot yet again underlined his quality. Undertaking his responsibilities on both sides of the ball with clarity and assuredness, there was much to admire about his contribution towards the vital 3-1 victory.

An absolute menace going forward, the gifted left back/left wingback’s movement ensured he was a terrific outlet for his team to utilise. Injecting crucial width and depth to horizontally and vertically stretch Clermont’s backline, his presence added so much impetus to Monaco’s offense.

Timing and directing his runs so he could latch onto passes behind the opposition midfield or defensive line and in ideal forward facing body postures to continue his momentum, this was key towards his success. In addition, when positioned high and wide, Henrique was well placed to receive fast switches of play or embark on dangerous out-to-in blindside runs into the final third.

His threat was enhanced by his sharp dovetailing with Aleksandr Golovin in the first half and Sofiane Diop in the second stanza. Aside from rotating sharply with his colleagues so he could surge infield on damaging underlapping runs, the way they pinned markers to create room for him out wide was also key.

It was also important how he’d return the favour for his comrades by drawing out opponents to manufacture space for Golovin and Diop to make runs into the channels.

Supplying two brilliant assists in this clash, it was fitting that his intelligent movement and spatial awareness served as the catalyst for both. For the first, his sharp interchange with Golovin saw him pick up possession centrally before sliding a beautifully glanced pass into Wissam Ben Yedder, who expertly went on to finish.

Then, for his second, the former Atletico Madrid man’s searing burst down the left saw him beautifully situated to receive freely. From here, he then assessed his options shrewdly before picking out Kevin Volland inside the box with a concise cutback, which the German made no mistake finishing.

To keep on the topic of his technical skills, and his incisive passing was a running theme throughout. While his two assists were unquestionably the highlight, the way he engaged in some tidy combination play, continued to strike neat crosses and cutbacks, switched the angle of attacks and recirculated possession was also notable.

Extremely comfortable in possession and rarely rushed, Henrique’s calmness on the ball, in combination with his smooth first touch and ball control, ensured he made good decisions when pressured. Being so calm and a handy dribbler subsequently meant he could draw one or multiple markers before finding a free man upfield.

Boasting an array of nifty maneuvers to unbalance his foes, his ability to outfox or gain separation from trackers using crafty changes of pace and direction, faked passes and feints served him well throughout.

It was fantastic to see Henrique hold his own on the defensive end too, for his nous and concentration saw him handle his duties with minimal fuss.

Facing off against the lively Jodel Dossou, the pair engaged in an interesting duel down the flank. Even though Dossou’s blistering speed and trickery proved a handful sometimes, the 24-year-old remained focused and kept himself balanced from his crouched posture to keep his foe at bay.

Making sure not to overcommit and knowing his man was far quicker, he jockeyed and sent the dangerous Dossou away from advantageous central areas to limit his effectiveness. Reacting quickly to his opponent’s moves and pressing him with vigour upon observing certain triggers, the pair’s duel was an intriguing subplot and showed how best to deal with a potentially lethal adversary.

Remaining aware of his surroundings by constantly checking over his back shoulder so he could stay alert to opponents and maintain an ideal position in relation to his backline, this benefitted him to be ready when he had to track a runner, help a teammate or know if he needed to drop back, step up or shift across.

Some other aspects of note his game came from how he stopped or slowed down counter attacks using his reading of the play, was good in the air and chimed in with some clean interventions to break up play.

Putting in a polished body of work on both sides of the ball, Henrique was unquestionably an integral element towards Monaco getting the win. Following his game changing exploits against Clermont, Henrique was fittingly rewarded with a place in L’Equipe’s team of the week too.

Feeling right at home and happy at Monaco, his recent comments made for captivating reading about how much he’s enjoying life at Monaco. “I think I’m adapting more and more to the team, the language, the championship. I get closer every day to my teammates. I have made a lot of progress. I always try to improve. Every day, in every game,” he explained.

“I’ve been here for over a year now, I have some playing time. It’s a great adventure for me. I may have a little more experience now, I feel comfortable expressing myself, to set an example for the young players in the group. It’s normal. Here, I found a balance and it does not only concern football. Everything is clear in my head, I want further progress and give to everything to Monaco.”

Kovac’s recent praise of him shows how highly he’s regarded by his manager, with the Croatian saying: “Tactically, he is very good. Defensively, he understands exactly our principles and the ideas developed. Offensively, he brings a lot, and is one of the engines of the team.”

Bringing so much to the table for Le Rouge et Blanc and developing into one of the premier left sided defenders in Europe, it’s been a joy to watch him go from strength to strength at Monaco since joining last year.

Reliable, adaptable, disciplined and possessing hardly any weaknesses, Henrique’s masterclass vs. Clermont yet again punctuated what a formidable force he is within this Monaco team.