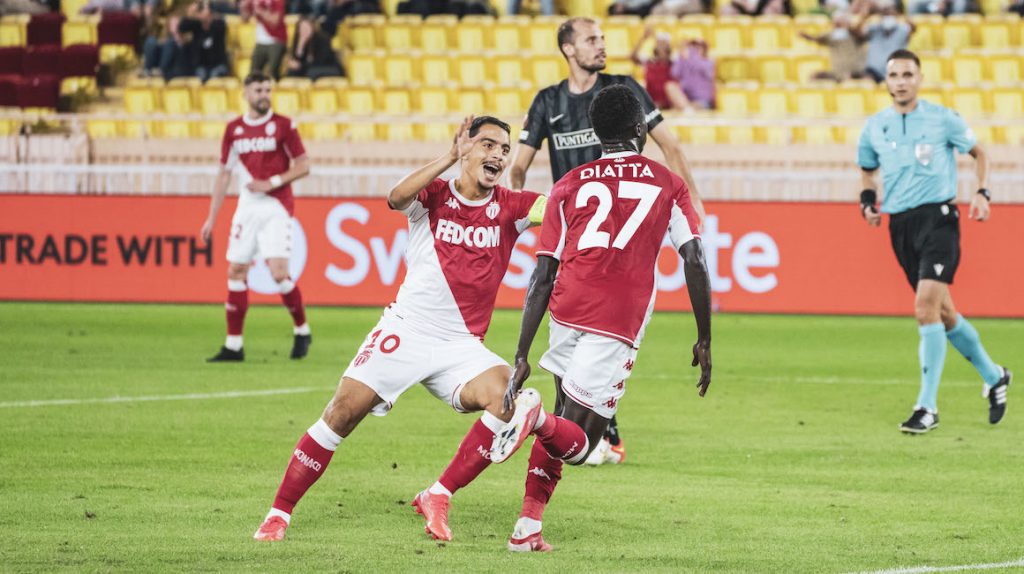 Despite struggling to truly stamp his mark for AS Monaco since joining back in January, Krepin Diatta showed exactly why the club were so keen to sign him by producing a game changing showing in Monaco’s Europa League opener.

Unquestionably the man of the match, the man acquired from Club Brugge for €16 million was an instrumental figure in his team’s crucial 1-0 win over Sturm Graz.

Aside from scoring a wonderfully taken goal to propel his side to victory, his all-round efforts were equally impressive, on a night where he constantly tormented his adversaries.

Operating out on the right flank within Niko Kovac’s 3-2-4-1 offensive animation, Diatta executed his role brilliantly to provide a vital outlet. Causing constant headaches for his opposition due to his movement, wizardry on the dribble and explosive speed, these aspects gave him the platform to thrive.

To start with his movement, and his high and wide positioning was key in stretching the Sturm Graz backline horizontally and vertically. By hugging the touchline, this provided his teammates a quality option for quick switches of play so he could be isolated vs. his direct opponent and use his dribbling prowess to wreak havoc. Moreover, with the defence required to quickly shift across, this created openings in the channels for Kevin Volland to smartly exploit with runs in behind.

Dovetailing smoothly with Volland and Ruben Aguilar down his side, the trio worked together coherently to form triangles, double team the fullback or generate 3v2 overloads to help bypass their adversaries.

As the ball ventured into and around the final third, his devastating blindside runs into the box came to the fore. Timing and directing his diagonal out-to-in runs, he supplied a fantastic option for crosses into the area, where he could use his dynamic advantage over his ball facing opponent to attack deliveries. It was also notable how prior to embarking on his depth runs, he’d use cunning double movements and zig zags to unbalance his foes to ensure he had separation so he could latch onto through balls first.

Having come close to scoring or assisting, he was finally rewarded for his goal, where his clever run saw him gain the jump on his marker to get goalside and power his header into the back of the net.

The Senegalese international’s electrifying pace and ball carrying prowess duly compounded issues for his opponents. Starting the match by marauding upfield on a classy 40 metre dribble, this proved a good omen for things to come. Looking confident and raring to take on his opponents, his use of nifty changes of pace and direction, shoulder drops, feints and shimmies saw him either beat his man or gain separation to fire off his passes.

Unpredictable and hard to read due to his unique dribbling style and array of ways he can outfox his trackers, Diatta often drew multiple markers, which had the added bonus of opening passing lanes or manufacturing a free man upfield.

Meanwhile, in terms of his passing, upside could be drawn from his tidy exchanges in close quarters, neat layoffs and the odd progressive cross, through ball and pass into the feet of his attackers. Indeed, the fact he completed 45 of his 54 attempted passes and hit eight accurate passes into the final third illustrated his solid contribution here.

Some other numbers that shone the spotlight on his outstanding body of work come from his nine touches inside the penalty area, five completed dribbles, four shots, three won aerial duels and two progressive runs.

In the aftermath of arguably his best match for Les Monegasques, Kovac made a point of singling him out for praise, explaining: “It is true that he has experienced difficulties since his arrival because of the Covid and some injuries. I’m really glad he got to score tonight. But, he didn’t listen to me, I asked him to score two goals (laughs)!”

Although (as Kovac noted) it hasn’t all been plain sailing for Diatta, who’s only managed to show glimpses of his undeniable quality so far for Monaco, he’ll be hoping this performance can be the catalyst for an upturn in fortunes. “Since my arrival I have experienced a few difficult periods, so it is important today to be decisive, to score and to be useful to the team,” he noted.

“We could have sealed the match before because we had opportunities, so we will continue to work on this point. We must continue this momentum and respond on Sunday, because the derby is a very important match.”

Still just 22 and with such massive scope for improvement, both he and the club will now be hoping he can replicate this exceptional outing on a consistent basis to truly stamp his claim for a regular starting berth.