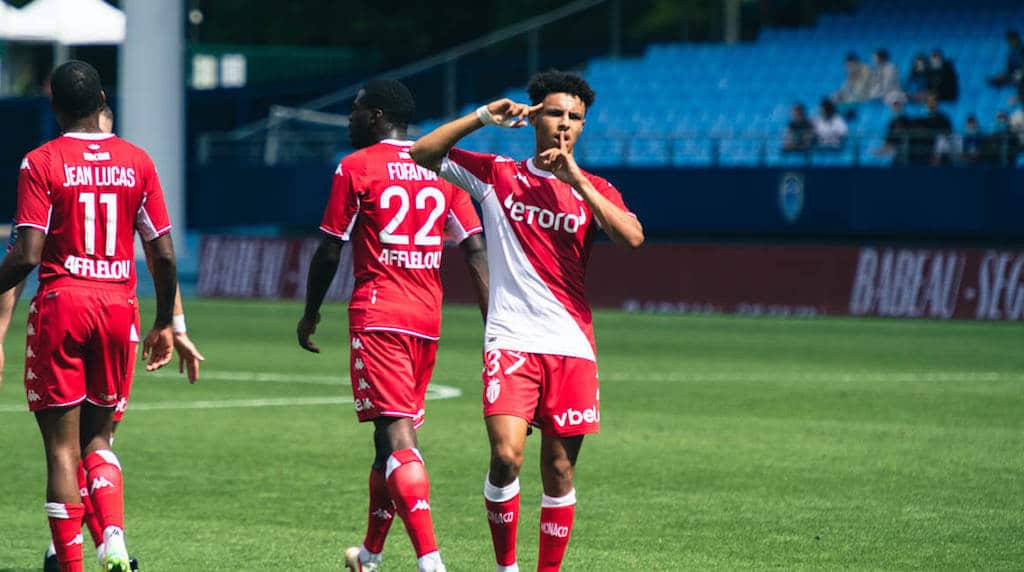 Sofiane Diop’s exceptional man of the match display propelled AS Monaco to their first Ligue 1 win of the season against Troyes, in a game where he underlined his immense quality.

Bagging a wonderfully taken brace, the gifted Frenchman was a key driving force behind his team getting all three points, with his movement, ball wizardry and understanding with his teammates especially valuable.

Deployed as Monaco’s left sided central attacking midfielder in their 3-2-4-1 offensive shape, he expertly found room in the half spaces, in between lines and when dropping into true central midfield areas.

Causing frequent issues for his adversaries (especially Oualid El Hajjam) due to his clever movement that left his markers unsure whether to follow him or hold their shape, he took full advantage of this indecision. Indeed, on many occasions he caught out his marker by dropping deep to receive freely, which subsequently gave him time and space on the ball to turn and dribble or assess his options before picking a pass.

It was also notable how he’d strategically drop centrally or into wider areas to manufacture 4v3 or 3v2 overloads to help his team progress through the thirds easier.

An important factor associated with his movement towards the ball was that when it did drag out his man, Wissam Ben Yedder was alert to the space this generated in behind, which further amplified dilemmas for his foes.

To add some extra unpredictability, Diop embarked on some cunning runs in behind when the opportunity arose, as he showed clever timing to exploit any gaps available. Gaining separation intelligently by using stop gos, zig zags and his nifty acceleration, this was handy in him giving him an edge.

Having threatened on a couple of occasions, this aspect of his display eventually bore fruit, with it being vital for both of his goals. For his first, upon noticing Monaco recover possession, he immediately marauded forward into the box between defenders to be ideally placed to finish home Ben Yedder’s cutback.

Then, for his second, his masterfully timed run in behind was obliged by Youssouf Fofana’s pinpoint pass, thus leaving him in a 1v1 with the keeper, which he coolly converted.

Technically gifted and remaining composed under pressure, his work with the ball at his feet was at a high level too. Sure with his first touch and boasting tight ball control, it was impressive to see him maneuver away from danger with his razor sharp turns and rapid changes of pace and direction.

Showing good awareness so he knew whether to protect the ball, spin his man, draw his man before finding a free colleague or release the ball quickly, he shone in this regard.

Not only was he good in high pressure, close quarters instances, but he also embarked on some damaging dribbles when afforded freedom. Be it using his sharp turn of speed, slick feints or hard to read shoulder drops, he was an elusive man to keep tabs on for Troyes.

Meanwhile, in terms of his passing, the former Sochaux prodigy’s creativity and execution saw him set up a slew of promising situations for his team. On top of linking play crisply with his back to goal and combining neatly in reduced space sequences, his capacity to unlock his adversaries with incisive through balls was a joy to watch.

The two through passes shown in the graphics below stood out particularly, though, with Diop’s vision, scanning and ball striking enabling Gelson Martins to surge in behind to be placed in enticing scoring positions.

By the numbers, his three shots, two goals from an XG of 0.81, four completed passes into the final third (at 100%), three dribbles, three progressive runs, two touches inside the area and two chances created illustrated his menace.

Another impressive statistic that arose after the match from Monaco’s official website was that Diop’s nine goals since the start of last season make him the second highest French scorer aged 21 or under in Europe’s top five leagues behind Nice’s Amine Gouiri (15).

Coach Kovac was rightfully full of praise for Diop after his game changing body of work, insisting: “He was very good. I’m very happy with what he did with the ball, especially with regard to the second goal where he made a run to the inside, with a fantastic pass from Youssouf with great timing.

“He must continue to play like this; he can still improve without the ball, but with it he is really on the right track. It’s his first double and I hope there will be more to come this season.”

Fresh from signing a contract extension to 2026, there will certainly be many more opportunities for him to improve and enjoy many more days like this glorious one against Troyes.

The challenge moving forward, as Kovac mentioned, will be honing his craft further and finding some more consistency so he can truly elevate his game to the next level.

Working under the tactically astute Croatian, who plays him in his perfect position, and the fact he’s determined to always keep honing his craft, there’s every reason to suggest he’ll do so sooner rather than later.