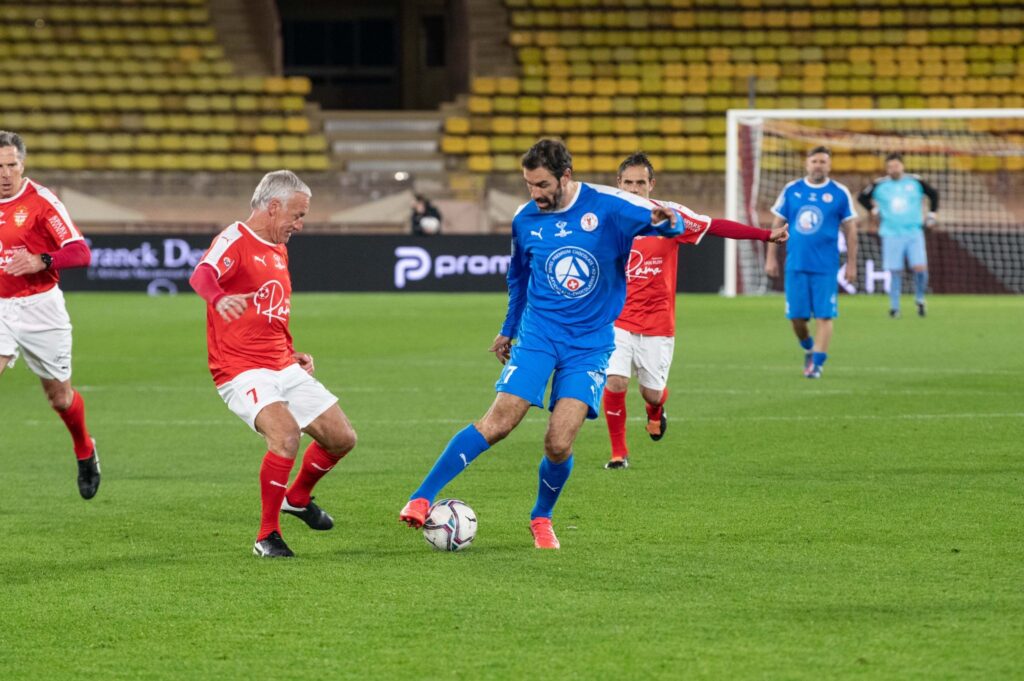 The second edition of the Fight Aids Cup took place on Monday evening at the Louis II stadium.  The all star charity match was won, like last time, by the Cirque FC team, who beat the Barbagiuans (2-1) while Prince Albert II looked on.

The stars were certainly out that night… on the Louis II pitch! With Didier Deschamps and Charles Leclerc, as well as Ludovic Giuly, Fernando Morientes, Youri Djorkaeff and Luca Toni, former footballing legends and Monaco celebrities put on a great show for the crowd who had turned out to cheer them on.

The friendly match was organised in support of the Fight Aids Monaco charity and its work against HIV, this year again pitting Louis Ducruet’s Barbagiuans against Cirque FC, led by Sébastien Frey et and Princesse Stéphanie.

Remembering the former glories of AS Monaco

And once again, it was the latter that came out on top, thanks in particular to a double from Italian striker Luca Toni, who was deservedly awarded the man-of-the-match trophy, designed by artist Fred Allard.

We’re proud to support the fight against the virus

Although former AS Monaco central defender Sébastien Squillaci’s header reduced the margin, Cirque FC were the ones who lifted the trophy, designed by artist Stéphane Cipre. The crowd enjoyed the match, and the more nostalgic fans were delighted to see some of their former heroes in action again.

Laure Boulleau, the only woman in the match, couldn’t hide how proud she was to have taken part in this now legendary event. “It’s a real pleasure to play in this match, in a team made up of football legends. I feel privileged to be able to play against footballers who inspired me and made me want to play football. Being here for Fight Aids Monaco, a good cause… motivates us to give our best. I would be delighted to take part again.”

Fight Aids Monaco, keeping up the fight against HIV

Part of the other team’s lineup, Charles Leclerc also enjoyed the experience, while admitting that his ball skills could use some work. “I had a lot of fun in the game, even if my football talent has yet to manifest itself”, smiled the Scuderia Ferrari driver, back from two weeks in the mountains to get ready for the new Formula 1 season.

“We played for a good cause, and in good spirits, even if the athletes’ competitiveness sometimes came out on the pitch. We’re proud to support the fight against the virus”, he added, before saying of his team’s defeat “That’s not what was important here.”  A reminder that the proceeds from the charity match will go to Fight Aids Monaco, and its continued fight against AIDS.