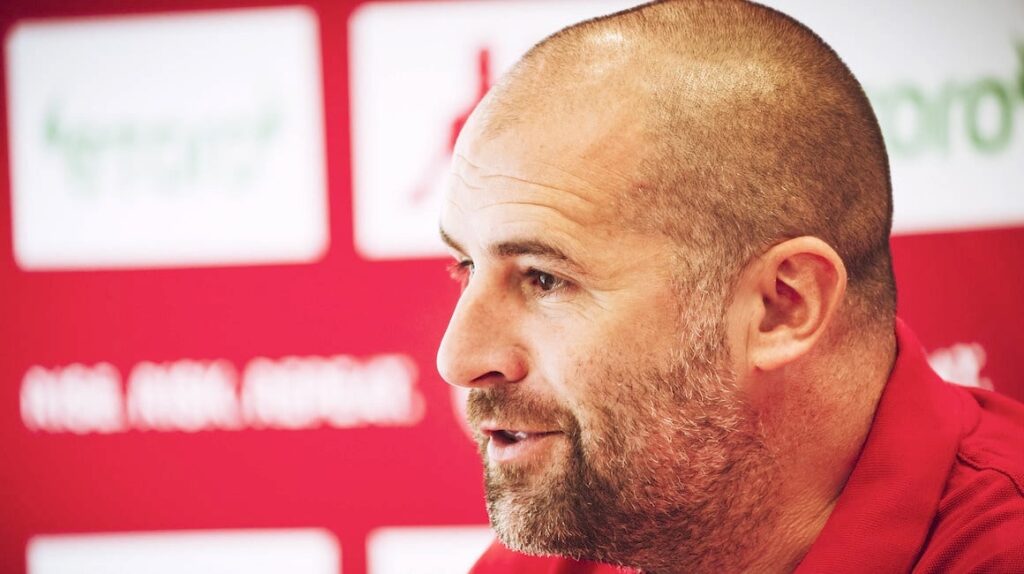 With the AS Monaco players already returning to training on Monday, the club’s sporting director, Paul Mitchell, spoke at the dawn of a 2022-2023 season which once again promises to be rich in the rock.

While the group that has resumed training is not yet fully complete, with the key absentee being French international Wissam Ben Yedder, who’s on vacation after playing in the Nations League, the majority of the players were present this Tuesday morning. On the program was medical and physical tests, plus running and indoor work.

A resumption of early training, which sees AS Monaco as the first club to resume in Ligue 1, this is explained by the European deadlines of the club, who like last season, will once again have to go through the play-offs to access the Champions League group stage.

“Our desire is really to be able to pick up the pace to be ready from the start of the European playoffs and Ligue 1,” confirmed Paul Mitchell, aware of the importance of optimal physical preparation to approach the European deadline. “We will have to be ready, in the best physical and mental condition and in top condition to take up this major challenge.”

Even if the schedule of friendly matches has not yet been fully revealed, two meetings are already planned. This Saturday, June 25 against Cercle Bruges, at the La Turbie Performance Center, and Wednesday, June 29, still at La Turbie, against the Swiss club Saint-Gall.

Paul Mitchell has a principle: never reveal the identity of the players concerned, nor even mention the names of players belonging to other clubs. “It’s not respectful, so I’m going to limit myself and say that they are two good players,” he said of the rumours around Paulo Dybala and Clement Lenglet.

If the sports director of the ASM recognised that Aurelien Tchouameni was a “super player”, he also specified that his departure was an opportunity for some to show what they can do. “First of all, I would like to point out that his transfer is the result of the team’s work as a collective, and that he sincerely deserved this opportunity,” he explained.

“We have a lot of up-and-coming players in this part of the pitch, who will have the opportunity to show themselves, with Eliot Matazo who improved again last season, Soungoutou Magassa, who has signed his first pro contract this year and who has been training with the squad since the beginning of preseason.

“Then there is obviously Youssouf Fofana, who had a superb second half of the season in Ligue 1 and Jean Lucas, who begins his second year here. We have a lot of qualities in the team ahead of the fixtures that await us, and I would like to note that the squad has come back in very good physical condition.”

On arrivals, Mitchell said the club will be “aggressive, but strategic.“ A way of saying that AS Monaco will sniff out good deals and young players with high potential, without spending crazy sums. But the club’s sporting director also clarified that the team will “perhaps” need “more experience” even if youngsters will still be at the heart of the project.

“We want to help our youngsters progress more by working with the senior players, while maintaining the stability that this requires. There is a lot of potential, we saw it with our U19 group. We have a great team and we have to trust this group. All while finding profiles to improve it, in order to be competitive in the three competitions”.

The sports director of AS Monaco was clear: the team will be competitive this season. “We have a shareholder who is very ambitious and who wants the best for AS Monaco,” he asserted.

Committed on three levels this season again, the ASM has the ambition to rely on a large group, in quantity, to best prepare for the sequence of matches. But also and above all to create a squad full of quality. “We have interesting profiles within the workforce but to let other players leave, we will need very, very large offers, like with Aurelien Tchouameni,” he warned.

The big European clubs are therefore warned. Monaco will not let its nuggets go so easily. And the Rock club intends more than ever to play a role on the national but also continental scene, with this time, a participation in the Champions League. “We have climbed twice on the Ligue 1 podium recently. We always want to push our limits,” he expressed.

“We must also use the experience of last season, and learn from that, to adapt our preseason and show our best qualities, and give our best in the moment. We will also have to rely on the growing experience of this team, one that we have been building for two years now.”