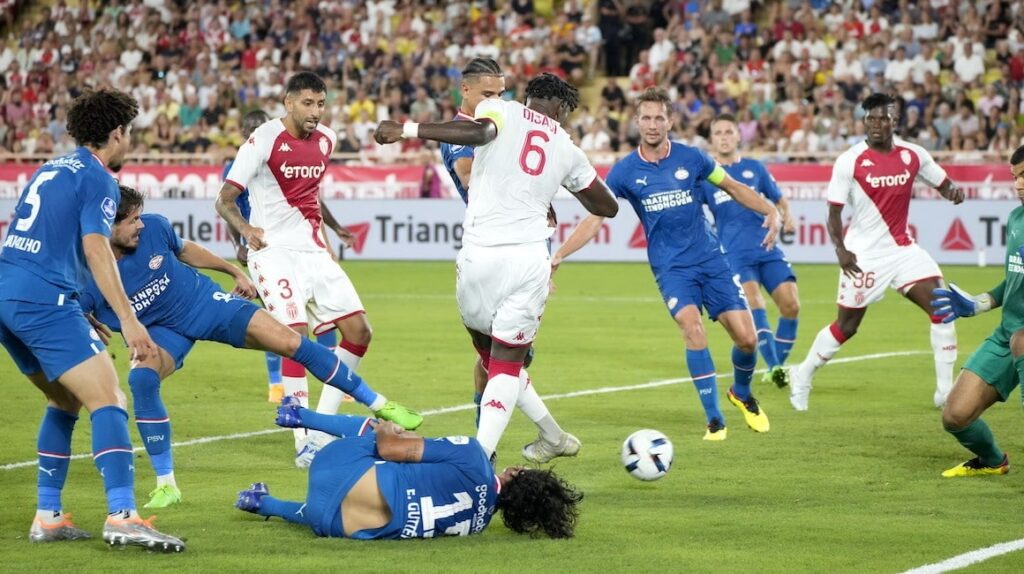 AS Monaco salvaged a draw late on against PSV Eindhoven in the first leg of their third preliminary round Champions League qualification clash courtesy of Axel Disasi’s 80th minute goal.

Getting off to a solid start in front of their home fans at the Stade Louis II, Monaco controlled possession and looked quite lively going forward from their hybrid shape that at various times resembled a 4-2-3-1, 4-2-2-2 and even a 4-3-3 depending on the movement of the attackers.

Despite Youssouf Fofana and Takumi Minamino unleashing efforts on goal, plus Les Monegasques having a penalty waved away, it was PSV who took the lead following a slick move that culminated in Joey Veerman steering home a classy finish in the 39th minute.

Down 1-0 at the interval, Philippe Clement’s men came out firing in the second half, eager to get back on level terms, as Minamino came close just five minutes after the restart. Further efforts from Kevin Volland, Wissam Ben Yedder and Minamino then arrived as the half wore on before Disasi finally equalised following Ismail Jakobs’ free kick on 80 minutes.

Monaco almost completed a dream comeback at the death only for Fofana to strike the post with a towering header, as the game ultimately ended 1-1.

“We can’t have any regrets because the players gave their all. They showed an exemplary mentality, despite everything. It was difficult to create chances in the first half, and PSV scored with their first real chance, obviously it was a blow but the team reacted extremely well. We comfortably dominated in the second half. We also had bad luck with Youssouf hitting the post, but if a team were to win tonight, it was us,” explained Clement afterwards.

“In general, the team is in good physical shape. We had what was an intense and tiring preseason for the players, but when we see their physical level tonight we see that it pays off! Against Strasbourg, it will be necessary to respond to a very physical team, with a lot of power and qualities. With the run of matches, inevitably we will rotate a little, but no let-up will be allowed! Everyone has to be physically at their peak to get the best possible results.”

Up next for Monaco is their opening Ligue 1 fixture of the new campaign against Strasbourg, who’ll pose an extremely difficult challenge for the Red and Whites in what looms as an exciting matchup to get the ball rolling domestically.

In the stands: Triumphant return for the “Munegu Family”

After two years of absence, the “Munegu Family” made a comeback for this very first match of the season at the Louis II stadium. And it must be said, it was a success with a completely full Second B stand, where families of AS Monaco fans were able to gather.

A desire dear to the president of the club, Dmitri Rybolovlev, who is always wanting to offer the opportunity to young supporters and their parents to attend the meetings of the red and white club in a warm and family atmosphere, it was a great evening for the fans. Accessible at an attractive price, the stand always offers its share of surprises, with its traditional make-up stand, its magician show and the presence of the club’s mascot, Bouba.

“The president’s desire is to strengthen the links between the club and local supporters by reaching young people and facilitating their access to the stadium,” said Olga Dementeva, Deputy General Manager of the club. “The objective of the Munegu Family is to offer a wonderful environment to families in order to make them want to come as much as possible to encourage the team at the stadium.”

An offer that is in line with the “Tous au Stade” operation, which last season allowed young licensees from amateur clubs in the region and Italy to come and watch matches against Metz, Reims and Troyes, this, in combination with the “Munego” carpooling service, dedicated to Monegasque supporters in order to facilitate access to the stadium, once again demonstrates the club’s desire to offer a unique experience to its supporters.