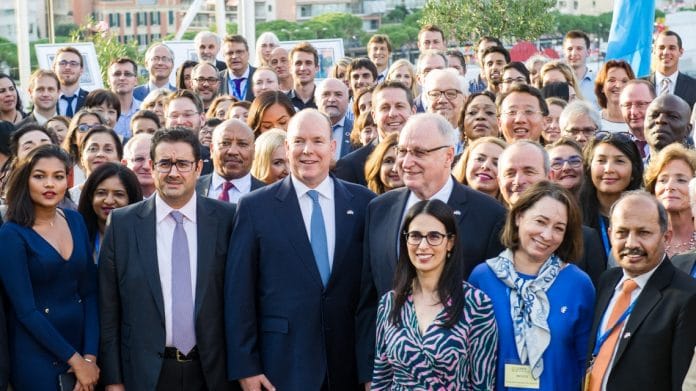 Ambassadors and representatives from 36 Member States visited the IAEA Environment Laboratories in Monaco last Friday, commemorating 20 years since the laboratories’ relocation to their present premises at Port Hercule.

The ambassadors learned about the work of the laboratories and the use of nuclear and isotopic techniques to study environmental changes in the oceans, during their visit.

In the evening they attended an anniversary reception in the laboratory premises in the presence of Prince Albert II of Monaco.

“The IAEA Environmental Laboratories are uniquely positioned to provide an invaluable service to the IAEA Member States,” said David Osborn, Director of the laboratories. “Nuclear and isotopic techniques can provide the data and precision needed to make good environmental choices and move towards more sustainable development.”

The ambassadors toured the three marine laboratories. They gained insight into how scientists can monitor ocean acidification and various pollutants and their effects on marine life and seafood safety.

Chile is pleased to have contributed to the development and validation of a nuclear-based methodology to monitor biotoxins in seafood, said Gloria Navarrete, Permanent Representative of Chile to the IAEA.

“Yet as Chile and others continue to suffer from the burden of recurring and worsening harmful algal bloom events, the work being conducted at the IAEA is more than ever needed to secure aquaculture and fishery production.”

The cooperation between the IAEA and Monaco began in 1961, when the first incarnation of the laboratories, the International Laboratory of Marine Radioactivity, was established. The laboratories still provide an open-access database of marine radioactivity measurements and reference materials that act as standards for laboratories worldwide.

The expansion of scientific activities and increased demand from governments has led to the opening of two more laboratories in Monaco.

“The United States is proud to be a strong supporter of the IAEA Marine Environmental Labs,” said Justen Thomas, Public Affairs Officer at the U.S.’s Mission to International Organizations in Vienna, including the IAEA.