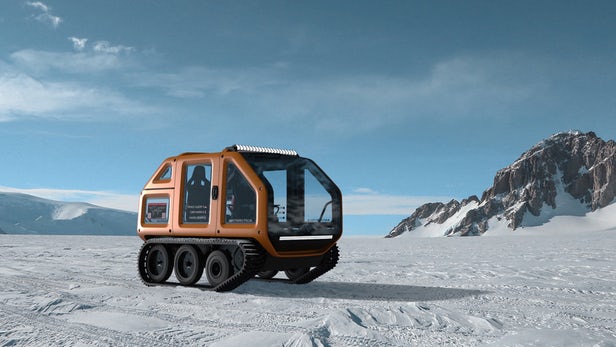 In an exciting development for the future of exploration and accessibility, Monaco-based Venturi Automobiles has unveiled ‘Antarctica,’ an electric all-terrain vehicle equipped to operate in sub-zero temperatures. According to our Canadian colleagues at the CBC, the
“Antarctica” vehicle will be deployed to retrace the footsteps of a historic French expedition that started in Edmonton, Canada in the 1930s.

For nearly two decades, Venturi Automobiles has pushed for the progress of sustainable mobility. Employing the newest available technologies, Venturi seeks to tackle challenges in all sorts of environments – crafting sports cars, urban and utilitarian vehicles. In their latest development, the company’s finalized ‘Antarctica’ vehicle was unveiled this past Tuesday in downtown Edmonton. Edmonton holds specific importance in this vehicle’s story, as it was the starting place for the historic French expedition known as the “Croisière Blanche,” which departed from the Hotel Macdonald in 1934. The story goes that the French millionaire Charles Bedaux attempted to blaze a direct trail to the continent’s West Coast before being forced to return to Edmonton, unsuccessful.

In honor of this intrepid expedition, the vehicle, which was created at the specific request of Prince Albert II of Monaco for Antarctic research, will attempt to complete the last leg of the expedition. In the first week of March, Prince Albert II, accompanied by Canadian astronaut Chris Hadfield and Venturi North America president Xavier Chevrin, will tackle a 42-kilometer stretch between Dease Lake and Telegraph Creek in British Columbia.

This adventure is the third mission in the Venturi Global Challenges project. Launched in 2009, the VGC are meant to examine and exhibit the feasibility of amazing feats in extreme conditions with the sole use of electric vehicles. This specific challenge will test the vehicle’s battery and mechanical systems in freezing temperatures. On paper, Antarctica’s battery should be able to withstand -50ºC.

An important development in a world with ever increasing temperature extremes. The vehicle will eventually be shipped to Antarctica to help with ongoing expedition and research efforts.