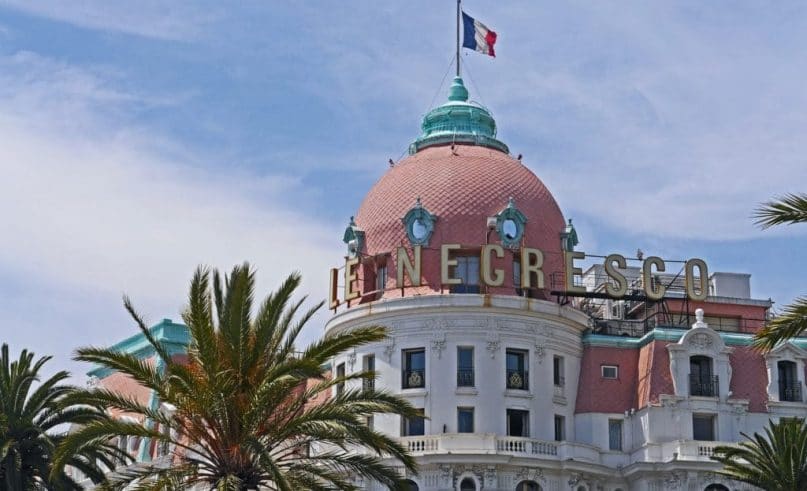 Deceased at the beginning of 2019, Madame Jeanne Augier had prepared provisions for her estate. However, complications related to multiple desires and conflicts are delaying its execution.

Jeanne Augier passed away in Nice on January 7th at the age of 95, leaving behind a massive estate. Like a queen mother, over sixty years she directed Nice’s famous palace, the Negresco. Her’s was a small financial empire whose estate has some pitfalls nonetheless.

A widow and childless, Jeanne Augier wrote a will without surprise. Her desire was to bequeath her fortune to the Mesnage-Augier Negresco Endowment Fund, which she herself had created in 2009 to manage her wealth. Besides the palace, she owned a villa in Saint-Vallier, apartments in Paris, parking complexes, and real estate in Nice.

For the moment, two directors are managing the affair. One, Maître Nathalie Thomas, manages the hotel. The other, Béatrice Dunogué-Gaffié, a specialist in civil law, manages the endowment fund, which is becoming a foundation. These two women arrived in 2014 to dispatch current affairs. Since 2013, Jeanne Augier, suffering from Alzheimer’s disease, was under supervision. Her memory loss prevented her, in particular, from directing the five-star palace. Thus, the palace was placed under judicial administration in 2013.

However, in 2017, considering that a hotel of its size cannot be managed by a judicial administrator, the public prosecutor of Nice, Jean-Michel Prêtre, seized the court of commerce. But faced with the backlash of employees who feared a disguised sale, the case was dismissed in Marseille. To complicate matters further, the National Public Prosecutor’s Office decided to conduct an investigation to ensure that the prosecutor did not seek to favor a specific prospective buyer… Under this pretense, Jean-Michel’s home and office were searched!

It must be said that the Negresco is worth a fortune on its own. Nearly 400 million euros according to a 2016 estimate. With its Belle Epoque facade and its pink cupola, it is the Hexagone’s last French palace and one of the most symbolic features on the Promenade des Anglais. It houses 124 rooms and suites. Its furniture makes it a genuine museum. A great admirer of Versailles, a compulsive collector, Jeanne Augier had accumulated some 6,000 works of art. Excitedly eccentric, she wore “French costumes” to her valet and had a famous portrait of Louis XIV by Hyacinthe Rigaud, or the Grosse Nana jaune by Niki de Saint Phalle. In the bedrooms and lounges, Empire era furniture rubs shoulders with plastic-bodied 1970s chairs.

We understand that such a heritage can arouse greed. Because, despite these administrative and judicial upheavals, the Negresco functions quite well. The same cannot be said of the endowment fund, which struggles with an issue of governance and the status of contradictory members.

Meanwhile, an auction is being held May 27th in Paris to sell the former Negresco boss’s jewelry and dresses. As for her dogs, the Yorkshire terrier Lili and shar-pei Lilou, a  wealthy Niçois couple adopted them. But Nice is not finished with the “Madame’s estate”, as everyone calls it…