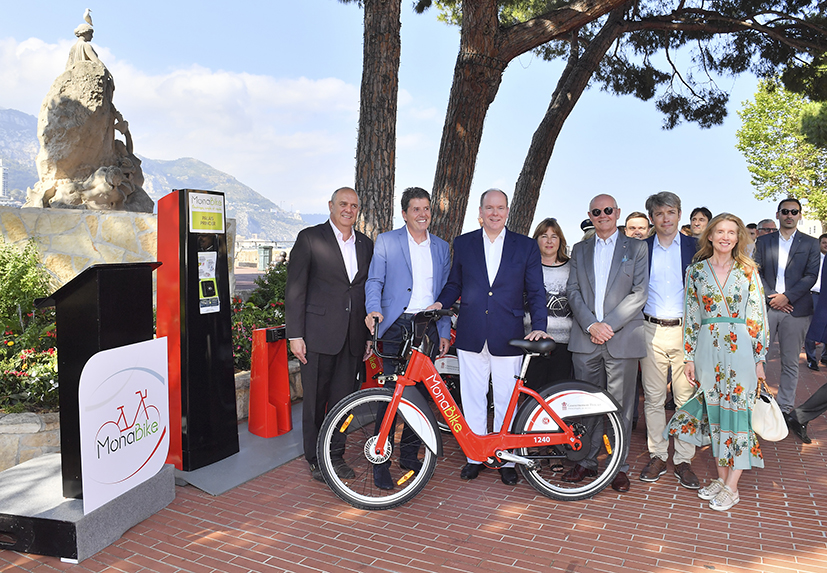 Prince Albert II inaugurated the new electric bike self-service service of the Principality “Monabike”. He was surrounded by Serge Telle, Minister of State, Marie-Pierre Gramaglia, Government Advisor-Minister of Equipment, of Environment and Urbanism, Stéphane Valeri, President of the National Council, Roland de Rechniewski, Director of the Compagnie des Autobus de Monaco and many personalities, including Tristan-Emmanuel Landry, Counselor at the Embassy of the Canada to Monaco.

The Sovereign Prince has kicked off this new stage in favour of soft mobility to encourage the use of bicycles in the Principality, strengthen the network of the territory and increase the capacity of current stations.

Thanks to a close collaboration between the services of the Prince’s Government and the Monaco Bus Company (CAM) which manages this service, this offer of electric bicycles for self-service offers, from Saturday, July 13, 32 stations and 300 bicycles, against, previously, 17 stations and a hundred bicycles. Thanks to a smartphone mobile application, this service, always accessible to regular subscribers, will now also be available to people visiting the Principality.

The Canadian company “PBSC” Urban Solutions was selected for this new service. It adds the Monegasque fleet to its fleet of 80,000 bikes in 35 cities in Australia, including the United States, Mexico, the United Kingdom, Spain and France.