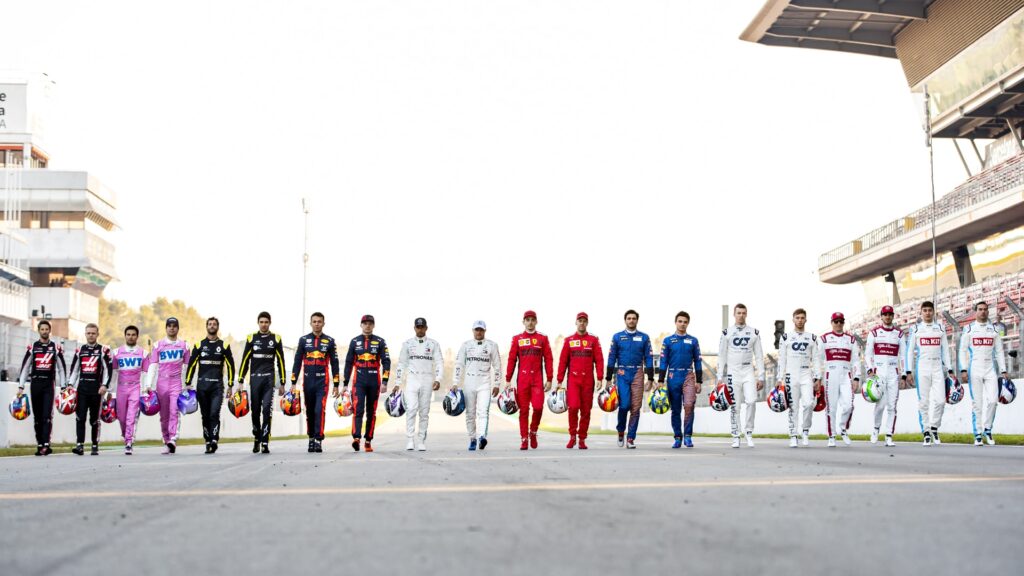 As the 2020 Formula 1 season finally gets ready to start this weekend in Austria (Sunday, July 5th at 3:10 pm) for the first Grand Prix of the year, Monaco Tribune decided to give an overview of this unprecedented season, full of twists and turns.

Could someone tip Lewis Hamilton off the podium?

2020 could be the year of records for the Brit. Lewis Hamilton, 35, is at the peak of his career, once again the favourite for the world championship title. Winner of the last three world championships, the Mercedes driver should draw motivation from his record, which could put him in the Formula 1 history books. With six world titles (2008, 2014, 2015, 2017, 2018, 2019), Hamilton is just one behind Michael Schumacher’s record. With 84 victories in 250 GP entries, he is now only seven wins away from Schumacher’s record (84 versus 91), who he has already defeated in terms of the pole position record with 88 versus 68. The latter’s podium record (155) could also fall to Hamilton (151).

Behind the Brit, his teammate and last season’s runner-up Valtteri Bottas is the main threat, alongside Max Verstappen, third last season, who could take advantage of a better performing Red Bull to get Mercedes fully out of the starting blocks. A follow up from Charles Leclerc‘s radiant first season or a possible grand exit from Sebastian Vettel could interfere in the fight for the title. However, it does all rely on the SF1000 showing a completely different face to the one displayed during the winter tests in Barcelona.

Can Charles Leclerc win the title this season?

A revelation for his first season with Ferrari in 2019 (fourth in the world championship, ahead of his teammate Sebastian Vettel), Charles Leclerc has established himself as the future of Formula 1. Above all, he is right now the present face of the sport. Maybe a world championship title is indeed on the horizon. One day, that’s for certain. As for this season, it is less sure. Not living up to expectations during the winter tests in Barcelona at the beginning of the year, the SF1000 could suffer in comparison to the Red Bull and Mercedes. Ferrari recently announced that a wholly redesigned SF1000 would be starting the third Grand Prix of the season in Hungary (July 19th). Is it enough to fight for the title this year? It is paramount to limit the damage done during the first two meetings of the season in Austria.

Will Racing Point be the main outsider this season behind the Mercedes, Red Bull and Ferrari trio?

It is perhaps the most eagerly awaited team of the year. Behind its disguised Mercedes look, the team led by Lawrence Stroll will be the season’s most pleasing surprise, which could join the battle with Renault and McLaren for fourth place in the World Constructors’ Championship. Impressive at the winter tests in Barcelona, the “pink arrows” performance will be closely watched at the Austrian Grand Prix. The reason for this is the troubling resemblance to the Mercedes W10 used in 2019. The British team is determined to make significant progress before Aston Martin’s official arrival to F1 in 2021. “This is the car we have always wanted to build,” said Andy Green, technical director at Racing Point. “We have been working in the Mercedes wind tunnel since May last year. It makes more sense to follow their concept than to build a Red Bull replica. All the tools and test procedures in the Mercedes wind tunnel are adapted to this concept. The front and rear suspensions and transmission are identical to those of the 2019 Mercedes.”

Will Renault finally take off, McLaren confirm, and Williams gets back on track?

Renault didn’t expect it. But in the game of musical chairs, orchestrated by the departure of Ferrari’s Sebastian Vettel and the arrival of Carlos Sainz to succeed him in 2021, Daniel Ricciardo decided to follow McLaren in replacing the Spaniard. As Esteban Ocon prepares to make his return to Formula One after a year in limbo following his departure from Force India (now Racing Point), the diamond-studded firm will once again attempt to establish themselves this season as the best team on the grid behind the untouchable Mercedes, Red Bull and Ferrari trio as well as the new Racing Point force. For his second and final year with the French team, Ricciardo will have to get rid of the competition from his young, ambitious counterpart, certainly favoured in the French clan since the announcement of the Australian’s departure. It may well hail in a future frenzied battle between the two drivers that could benefit Renault.

Gaining fourth place last year in the Constructor Championship, McLaren will try to repeat such a performance, still with Carlos Sainz, performing solidly in the previous year. However, in the grip of financial difficulties, McLaren, granted a €165 million loan from a Bahraini bank, may not be able to develop its MCL35 as it sees fit. For Williams’ part, last in the constructor rankings last year, they recently announced they are opening up to outside investors. This could lead to the eventual sale of the entire structure, which in turn could lead to a renewed performance in 2021. But even this season, despite the talent of George Russell, the British team will still find it difficult to get higher up the grid.

A shortened but explosive season?

To date, the number of Grand Prix that will make up the 2020 F1 calendar remains unknown. While 22 Grand Prix were initially scheduled at the start of the season, COVID-19 has forced the organisers to decrease the number of races. While eight events are currently on the programme for this 2020 season (all in Europe, two of which will be held in Austria and Great Britain), other dates should be made official in the coming weeks. Singapore, Russia, Japan, the United States, Mexico, Brazil and Abu Dhabi could also be on the calendar, all initially postponed or cancelled this year. Whatever happens, the twenty drivers on the grid this season will not be able to miss their start to the season. Otherwise, they will quickly draw a line under their ambitions.