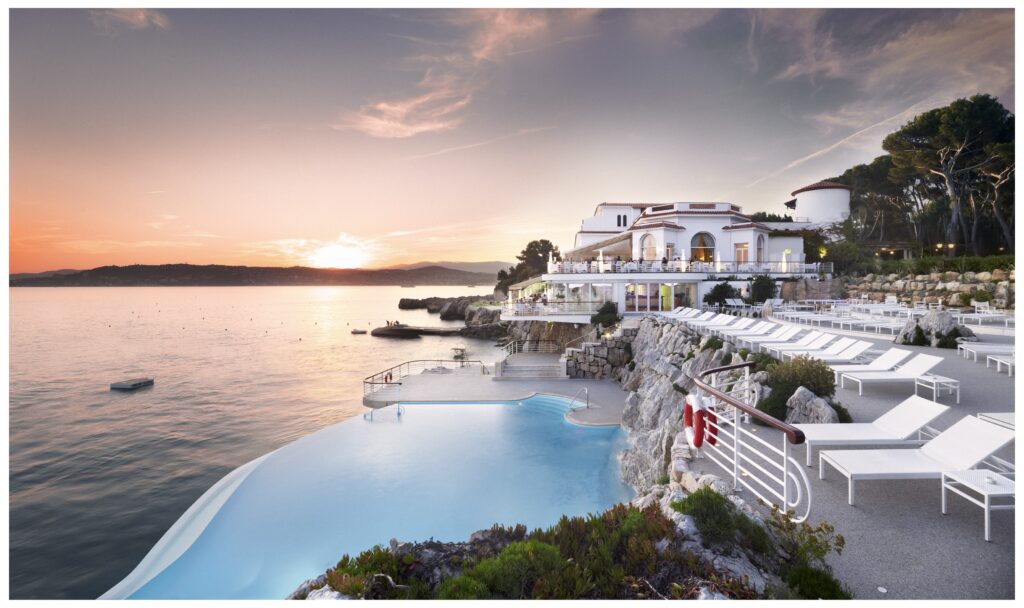 For the next stop in our series on the Riviera’s historic luxury hotels, we’re taking up lodging in Antibes. After the Hotel de la Chèvre d’Or, the Negresco hotel in Nice, discover the Hotel du Cap-Eden-Roc, which celebrates this year its 150th anniversary.

It all starts in 1863, when Hippolyte de Villemessant, French journalist and founder of the Figaro newspaper, decides to create a residence where artists and intellectuals can get some rest. However, de Villemessant lacks the funds for such a large project and the idea only materialises when, a few years later, the right investor finally comes along. At last, the Grand Hotel du Cap is inaugurated on 26 February 1870.

Some decades later, Antoine Sella, a young hotelier from the Italian region of Piedmont, arrives at the establishment with ambitious projects. He dreams of turning the Grand Hotel into a luxury establishment. In 1914, he opens a tea-room in the hotel’s main driveway in order to attract new visitors. The tea-room sows the first seed of what would later become the Hotel du Cap-Eden-Roc.

Sella’s ambitious plans come to a halt when the war breaks out. The hotel is requisitioned and used as a hospital. However, even harsh times can be fruitful. While observing off-duty nurses at the hotel, Antoine Sella notices how on warm summer days they cool themselves off in the Mediterranean. Sella has an idea: The Grand Hotel du Cap should henceforth have a sea water swimming pool. The swimming pool might have been a simple enough idea, but it turns Antoine Sella into a pioneer of the summer season on the Côte d’Azur.

According to Cécile You, tour guide in Antibes for the last twelve years, the sea-water swimming pool is responsible for the reputation of the Hotel Cap-Eden-Roc: “Antoine Sella was working when the summer tourist season in Antibes was just starting. Of course, the villas in the area were already being rented by celebrities and European royalty, but it really was the very beginning of the concept of the tourist season as we now know it. The hotel helped build the reputation of the Cap d’Antibes as an attractive tourist destination. Famous people looked for a quiet haven, a beautiful place that wouldn’t be as loud and chaotic as the city – on Cap d ’Antibes they could find exactly that,” she explains.

From Fitzgerald to Chagall

The history of the Hotel Cap-Eden-Roc owes a lot to Gerald and Sara Murphy. The couple were amongst the first Americans to spend their summers on the Riviera, bringing with them a train of illustrious figures from across the Atlantic. “Before them, the Riviera’s elite tourists all came in the winter. People preferred the softness of winter, when the sun wasn’t as strong,” explains Cécile You.

However, the Murphys turn things around. As years go by, the Grand Hotel transforms little by little. The swimming pool and the Eden-Roc pavilion are expanded, the hotel’s Boat Club is founded, and the tea-room becomes a restaurant.  F. Scott Fitzgerald, Ernest Hemingway, Marc Chagall all visit the hotel, and so do Marlene Dietrich and her lover. The duke and duchess of Windsor are regular clients throughout the 1930s.

Pablo Picasso too stops by. In 1955, the artist is even asked to conceive and design the new restaurant menu. In 1969, the Grand Hotel du Cap is bought by Rudolf August Oetke. The industrialist shares the same values and the same corporate vision as Antoine Sella and his son, André Sella. A major renovation effort is launched to equip the hotel with all the comfort of modern facilities. It is in 1987 that the hotel becomes the Hotel du Cap-Eden-Roc. Its history brings a sense of glamour to the establishment that visitors continues to cherish.  “Today, the name still evokes something, especially for first-time visitors. It’s a luxury hotel that has welcomed celebrities. It’s a place of endless fascination and prestige,” Says Ms. You.