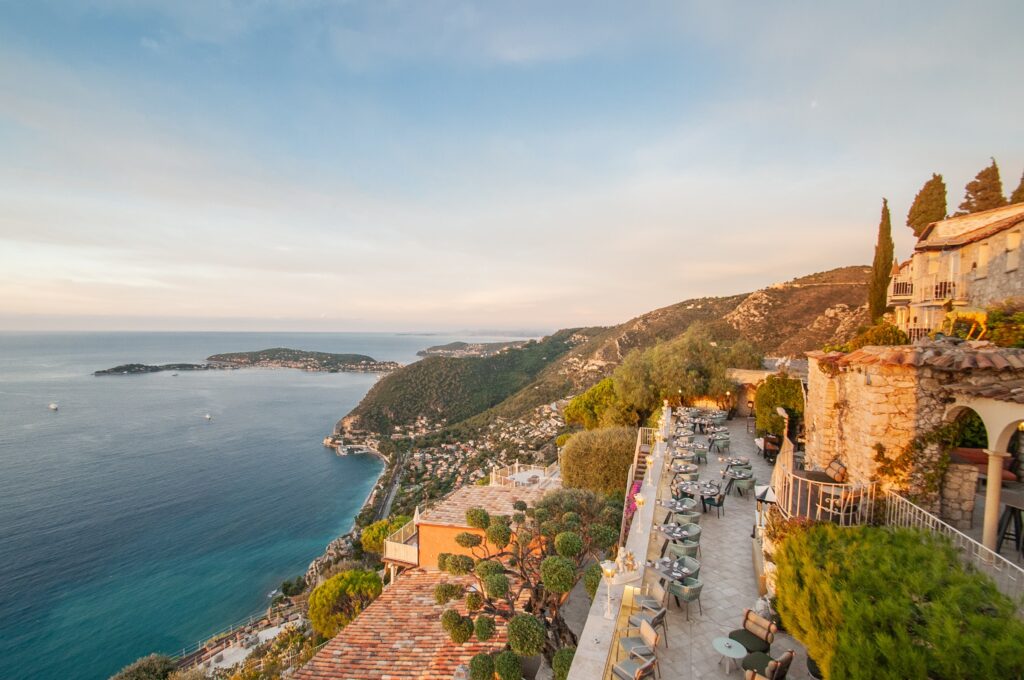 For the second year in a row, the leading travel magazine Travel+Leisure has named Le Château de la Chèvre d’Or the Number One Resort Hotel in France. To inaugurate our series on the historic hotels of the Riviera, we would like to introduce you to this establishment that is truly a feast for the eyes.

Perhaps it is the jaw-dropping view on the Mediterranean that earned the Château de la Chèvre d’Or such recognition. For two years in a row, readers of leading tourism magazine Travel+Leisure have awarded the establishment the title of Number One Resort Hotel in France. Thierry Naidu, hotel manager at the Château de la Chèvre d’Or is humbled by such news. “We are very happy for all our teams because this award is also a recognition of the quality of the service we offer our clients,” he says.

Lost in the winding streets of Èze

Location, location, location, as the saying goes. Perched high up in the village of Èze, the Château stands at 429 meters above sea level. All merit – believe it or not – of Walt Disney.  “At the beginning, La Chèvre d’Or was a restaurant,” explains Thierry Naidu. “It was only later that little by little it became a hotel. It was actually Walt Disney who suggested to the owner at the time that he should buy the village houses next to the restaurant and turn the establishment into a hotel. In the 50s there were four rooms. The number was up to 12 in the 90s and now we have 45 rooms and suites, all while trying to preserve the feeling of being in a village. So, when you walk around the village, you are in a way walking around the hotel,” he says. The setting brings of course authenticity, but it is the promise of privacy that is most prized by the hotel’s guests. “In a traditional hotel you need go through a reception. Here, however, it is easy to get some peace and quiet. You’re staying in a village house. Guests can have their own garden. It is a much more private stay,” explains the hotel manager.

The hotel’s guests can enjoy a garden with 400 citrus plants, a sauna, a swimming pool, a jacuzzi, a gym, as well as several restaurants. There is of course La Chèvre d’Or, a two Michelin star gourmet restaurant. Its guest book is a step into history: Bono, Beyonce, Shakira, Bill Clinton, Javier Bardem, Jack Nicholson have all tasted the Mediterranean cuisine of chefs Arnaud Faye and Julien Dugourd. “The Chèvre d’Or restaurant is like haute couture,” explains Thierry Naidu “But we also have two other bistro-type restaurants. Even if we’ve always promoted out gourmet offer and we’ve been awarded two Michelin stars, we’ve always wanted to remain accessible, because everybody should be able to discover La Chèvre d’Or,” he says.

It is no surprised that 2020 has been a challenge for the Château de la Chèvre d’Or. In any normal year, 85% of the hotel’s clients are foreigners. In 2020, the challenge was to charm French tourists, a feat which was more or less successful. “July was alright, and August was good,” says the hotel manager. However, even with the Riviera’s Indian summer, apprehension remains about September and October revenues, now that several important congresses have been cancelled in Monaco.